Following a stream of EPs and singles, Melbourne-based instrumental trio The Omnific have finally released their full-length debut. Escapades appeared in October after a sustained campaign of singles and videos drip-fed ahead of the release.

“The thought process behind all the singles was to try our luck on the digital world, and capitalise on each song as a song,” explains one of the band’s two bassists, Matt Fack. “If it was possible to release our record and have it get out there without singles, that would be amazing, but we’re trying our best to promote it, and we can do more videos too. I think it was a strong campaign overall.”

The uniquely-configured three piece increased their digital following two-fold from 30000 to over 61000 since the first clip Wax and Wane came out in May, so it’s difficult to argue with Fack’s assertion. New fans have flocked to the cause of The Omnific and their twin-bass driven progressive rock.

“We’ve definitely attracted people who have never heard of us joining the journey towards the album with each single,” Fack says. Along the way, there have been a few who have accused The Omnific’s dynamic of gimmickry. After all, while two-bass bands aren’t unheard of, one that is also fully instrumental is exceedingly rare. “I think we’ve developed our sound to the point where we’re extremely proud of what we’ve created,” Fack continues. “Some people might interpret the two bass players as a gimmick, but the songwriting is there. The people who like what we do, like the songwriting.”

The band’s genesis was a happy accident over five years ago. There was never any thought to add other players or instruments, or vocals for that matter.

“Matt and me came about forming this band because we had similar interests when we did something together,” says the other bass player, Toby Peterson-Stewart. “Then we just thought, ‘Why don’t we start a band?’ It was a very unthought-about thing to do, and it just kind of happened, which is how life goes! So it just kind of happened, and now we’re five and a half years down the track and we’re still loving it. We just had similar motivation, and at that time, skill level and ideas about where we wanted to take our music careers. It just kind of made sense.”

“Because we’re instrumental, we can get a bit more creative with what we play,” Fack offers.

Escapades is a wild tapestry of musical styles encompassing djent, funk, rock and electronica. It isn’t exactly an album for the faint-hearted or those dipping their toes in the experimental rock genre for the first time. There is a lot going on, much of which could probably only be best appreciated by those who are already prog fans.

“I think the modern instrumental prog scene – it’s probably been the same for the last 40 years – draws that crowd that understands what’s going on, that understands, say, what technique the guitarist is using,” Peterson-Stewart observes. “Satch or Vai or someone like that, you’ve got to have some understanding of it or it’s like going to a really advanced science lecture and you have no idea what’s going on. That’s what some people can get when they listen to some instrumental stuff. Like there’s this bass technique called thumbing that we use a lot of on this album, and some people don’t understand that technique.”

The Omnific also indulged in some outside collaboration on the album’s opening track. Clay Gober of Texas math rock band Polyphia turns Antecedent into a three-way bass attack.

“It’s not the first time we’ve had three on a song,” Fack says, but I think this one, especially featuring someone we’ve looked up to for years, was surreal. Someone like Clay who could bring their own sound to the band, his playing is really himself – he has his own style and he brought that to our music, so it was awesome to have like a third opinion, almost, on the song.”

Getting together to complete the album during the COVID crisis was difficult, but it wasn’t the only obstacle facing the band. Fack admits that the entire process was something of a challenge, due in part to The Omnific’s own technical songwriting.

“Getting together was the hardest [issue]. Figuring out what date we could start recording drums was a big discussion point for a long time. We were ready to go for a couple months before we actually recorded, but having that extra preparation made it better in hindsight. There were so many challenges, not just with COVID, but with nailing bass parts. Because we’ve got lots and lots of layers, getting them all to fit throughout the recording process, and on top of that, the synth work, the drums, the mixing. There were so many different components we had to get through. Zoom and Skype sessions is a thing now, so at least that made it possible.”

The next step for them is touring, although like every other musical artist, it’s been difficult to predict just when they’re going to be able to do that again. In some good news, The Omnific has been named on the bill of next year’s touring rock festival, Uncaged, with bands like Wolfmother, Magic Dirt, Tumbleweed and Caligula’s Horse.

“There’s a few bands on there that maybe aren’t instrumental but are in the progressive genre…” Fack begins. “We’re the only instrumental one on there, now that I think about it!”

Theirs is an interesting and thoughtful inclusion on a festival that promises a diversity of Australian rock and metal talent. Apart from those shows, however, everything else is up in the air on the touring front for The Omnific.

“Our goal is to tour the record to some extent,” Fack says. “Obviously we’ve got Uncaged, so that’s the start of that, but nothing [else] has dates, unfortunately, yet.”

Fortunately, they have been able to complete and release an exceptional album of experimental progressive rock that should open further doors for them. What happens next depends on the pandemic.

Says Fack: “The three of us are grateful that we’ve been able to do the album and make it a final product all through the lockdown, and hopefully get shows going.” 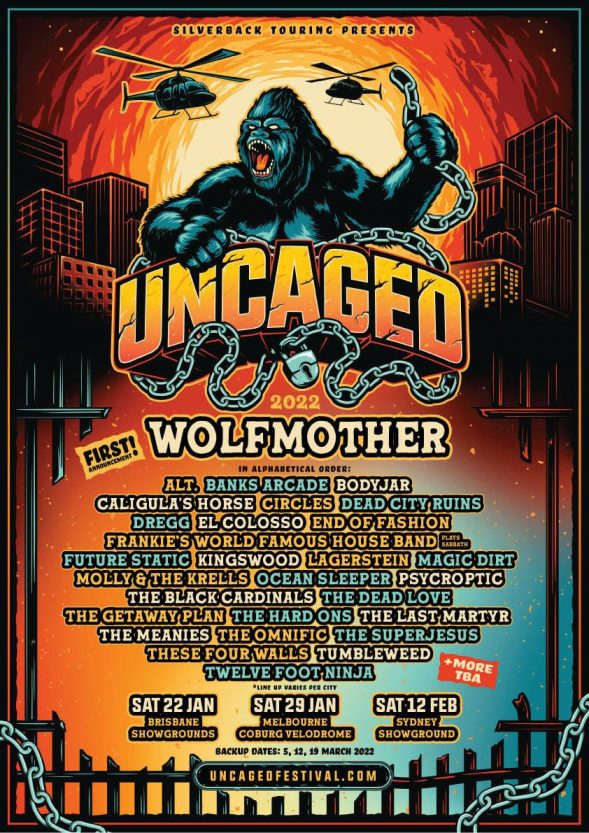