What was it about 1986? In a year that was dominated by explosions – the destruction of the space shuttle Challenger in January and the fire and explosion at the Chernobyl nuclear plant – there was a sudden plethora of albums released that have remained vitally important to the world of metal and rock to this day. Some changed the face of music forever, some were just really good but which ever they were, there was some creative magic going on thirty years ago that led to some landmark album releases. To celebrate the 30th anniversary of Master of Puppets, Loud is taking a brief look at both it and some of the other big ones from 1986. 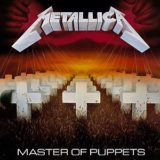 METALLICA: Master of Puppets
Metallica had already altered the fabric of metal with their first two albums, but no one could have expected the impact that would be felt when they dropped this monster in February 1986. Everything the first two records had brought to the table was refined and remodelled into an epic slab that laid the groundwork for their future world domination. Hetfield’s dark and thought-provoking lyrics examined madness, drug addiction, TV evangelism, war and Lovecraftian themes, laid out over sweeping, multi-layered and tight arrangements and superb playing. Every track is a stand-out, from the brutal hammering of ‘Disposable Heroes’ through the multi-faceted title track, the Sabbathesque plod of ‘The Thing That Should Not Be’ to Burton’s magnificent ‘Orion’, Master of Puppets is a masterpiece from front to back that validates Metallica’s entire existence. They were never this good again. 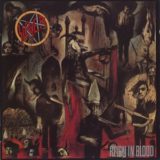 SLAYER: Reign in Blood
With the world still reverberating from the impact of Master of Puppets, along came Slayer with the most extreme and intense thrash metal album ever recorded. Reign in Blood was pure speed and intensity from Tom Araya’s opening scream, 29 minutes of unrelenting sonic insanity that brooked no quarter. Conceived as an experiment in brutality that eschewed any form of conventional song writing, Slayer reinvented in one swift stroke. Demonology, Satanism, festering plagues and Nazi atrocities ripped from Araya’s throat as a tuneless shout while Kerry King and Jeff Hanneman cross-fired razorwire riffs at mindnumbing speed, all pinned down with Dave Lombardo’s jazz-inspired dime-stop drumming. Rick Rubin’s amazing production not only stopped it from sounding like a complete mess, it elevated it above almost any other record – from any genre – released that year. Metal was never the same from this point. 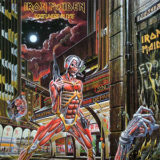 IRON MAIDEN: Somewhere in Time
While less revered than previous albums in the Iron Maiden catalogue, Somewhere in Time was released during a hot streak for the band that made them the biggest metal act in the world in the 1980s. Featuring Derek Riggs’ typically idiosyncratic artwork that referenced all previous albums along with popular sci-fi tropes such as Blade Runner and Dr Who, Somewhere in Time saw the introduction of guitar synths into Maiden’s music and the further flowering of Adrian Smith as a song writer, with three of eight tracks credited solely to him including the world-weary ‘Wasted Years’ and the melancholy ‘Sea of Madness’. While a couple of the Harris-penned tunes are verifiable clunkers, the rest of the material proved that Iron Maiden, even exhausted after one of the world’s longest single tours, were still at the top of their game. 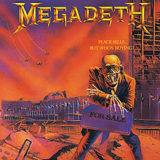 MEGADETH: Peace Sells… but Who’s Buying?
Considering the amount of drugs this band was doing at the time, it’s a wonder Megadeth could get anything down on tape, never mind one of thrash metal’s early masterpieces. Peace Sells was the consolidation and maturity of the sound Dave Mustaine and his cohorts had initiated on their debut, and the song writing was a huge improvement, typified by the likes of ‘Wake Up Dead’, ‘Peace Sells’ and ‘Devil’s Island’. While Metallica went for grandiosity and Slayer for outright speed, Megadeth’s vision of thrash was lean and hungry, feverish and menacing, fuelled by a snarl of bitter rage and virtuoso-level guitar mastery. 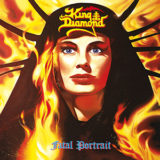 KING DIAMOND: Fatal Portrait
Fatal Portrait witnessed the beginning of King Diamond’s transition from the dark Satanic overtures of Mercyful Fate into a heavy metal Alice Cooper. This was the seeding of theatrical and conceptual artist that King would later become. Five of the tracks form a story-telling suite that with later releases would spread across entire albums; here too the King starts experimenting with his incredible voice, but the real stars are the riffs and guitar-play, predominantly that of newcomer Andy LaRocque, still one of metal’s critically under-rated axemen. 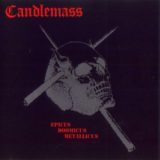 CANDLEMASS: Epicus Doomicus Metallicus
While the rest of the European metal brigade were scrambling to catch up to the North American thrash bands, Candlemass decided to do the exact opposite. Epicus Doomicus Metallicus steered metal back to long, rambling songs with immense, slow and heavy riffs. Johan Langvist’s vocals lacked power and finesse but in combination with Leif Edling’s crushing songs, the Candlemass debut evoked a sense of the thundering Black Sabbath ethic and ushered in another new genre of metal. 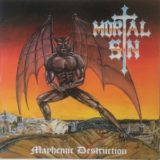 MORTAL SIN: Mayhemic Destruction
Thrash was still at the foetal stage in Australia when Mortal Sin brought forth this squealing brat mid-year. Conceived as a demo but delivered fully formed on vinyl, Mayhemic Destruction caught the metal world’s attention immediately. Hokey lyrics about dominatrices and eternal torment were made up for by fiercely catchy choruses and fantastic, hook-ridden thrash metal that epitomised the pure underground spirit that had spawned the band’s influences and led to Mortal Sin being signed to Metallica’s European record label. A watershed moment for Australian thrash metal. 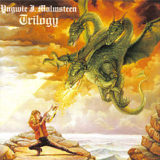 YNGWIE J. MALMSTEEN: Trilogy
For some reason released simply as Yngwie J. Malmsteen instead of the Malmsteen’s Rising Force he had previously been using, Trilogy was the Swedish shredder’s genuine attempt at actual song writing, an attempt that mostly paid off. Mark Boals didn’t possess the gravitas of his predecessor Jeff Scott Soto nor his replacement Joe Lynn Turner but he does well with the material he had to deal with. Malmsteen’s amateurish lyrics are made up for by the sheer talent of he and his sidemen, the Johansson brothers and the final track, ‘Trilogy Suite Op. 5’ is a breathtaking example of Malmsteen’s compositional and musical ability. 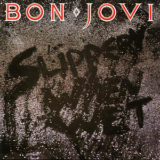 BON JOVI: Slippery When Wet
Certainly not a metal album, but it would be churlish not to include this. Bon Jovi were on the verge of being dropped when their connection with producer Bruce Fairbairn resulted in one the best albums of hard rock party music ever, yet it almost wasn’t to be. Jon Bon Jovi had originally written ‘You Give Love a Bad Name’ for Canadian also-rans Loverboy and wasn’t keen on ‘Livin’ on a Prayer’ until Richie Sambora convinced him it would be a hit – one of the most enduring rock hits of the decade, as it turned out. From there, the only way was up. 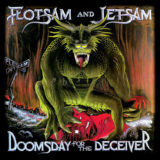 FLOTSAM AND JETSAM: Doomsday for the Deceiver
A band mostly relegated to the Where Are They Now? file these days, this Arizona quintet’s debut album was another example of how vital and energetic thrash metal was at the underground level. Bristling with metal menace exemplified in epic tracks like ‘Metalshock’ and the title cut, Doomsday for the Deceiver scored a rare perfect review in Kerrang! and attracted the attention of audiences worldwide. Jason Newstead had his hand in every track here, so Metallica knew exactly what they were getting when he got the call up to replace Cliff Burton eighteen months later.

Want some more? Here’s some others we could have mentioned: Motorhead: Orgasmatron, Alice Cooper: Constrictor, Ozzy Osbourne: The Ultimate Sin, W.A.S.P.: Inside the Electric Circus, Cinderella: Nightsongs, Metal Church: The Dark, Sepultura: Morbid Visions, Tesla: Mechanical Resonance, Europe: The Final Frontier, The Angels: Howling, Georgia Satellites: Georgia Satellites. And there were others…