Thy Art is Murder: Extreme Desolation

Andy Marsh is in the US Mid-West a week and a half out from Thy Art is Murder’s Australian tour. While the rest of them are likely taking a break after another barnstorming tour, the band’s guitarist, manager and label head is still busy working, always looking to take Thy Art to the next level, the next tour or the next audience.

Overall, everyone must be pretty pleased about the curve Thy Art is Murder has been on since you came into the band.
We all feel pretty good about it, I guess. It’s been a pretty long eight years – nine years now and we’ve just been going onwards and upwards and trying to make the coolest music that we can. We obviously never thought the band would become this successful around the world. Nine years ago we were trying to play shows in other states. Now, the majority of my time’s spent plotting how to play shows in the Balkans and SE Asia and places that we never thought we’d go, let alone tour in.

So how difficult is it then, to get the band into places like that for shows?
We’re talking about a lot of places that have been affected by war or poverty or various cultural setbacks. It comes down to good planning and good logistics management. You have to mark down each piece of equipment, each piece of merchandise. There’s a lot of bribing… heaps of things that you would never know until you’ve done it heaps of times like we have. You’ve just got to go there and figure it out. I wouldn’t say it’s impossible, but it does come with a higher level of difficulty than to go to America or mainland Europe.

With the amount of bribing and under the table stuff you have to do to play shows like that, it is all worthwhile?
Playing to anyone’s worthwhile for us. Just to go to those places where they haven’t had as much access to western culture or the Internet or TV or there’s been government suppression of the people, to go there and play shows and they know who we are and they give a shit – it’s mindblowing. It’s 100% worth it. It’s one of those really good reminders of why we do what we do. Financially it might not be as rewarding as playing in Germany or the west coast of America, but it doesn’t matter. But you’re not always trying to make money. It is a business, but it’s also a band. The band part of it is playing music to whoever wants to listen to it. So we have to balance playing places where we can make a profit and doing our responsible bit as artists to play to as many people as we can.

When you’re touring all the time and then you take a break, is there a feeling of displacement that comes along with that? Do you feel like you don’t really know what to do with yourself?
I don’t personally. Maybe the other guys in the band do, or other people maybe, but I sleep somewhere else probably once a  week anyway. I don’t have a regular home. I’m either on one of my buses somewhere in Europe or in the States or flying around Australia… I’m in Denver, Colorado, at the moment, and then in 48 hours I’ll be in LA and then I’ll be on a plane to Australia. So for me, that’s how it is. I travel all the time. It’s a bit crazy. Not everybody could do it,  but that’s the life I chose. My life is like being on tour all the time. I don’t have any downtime.

The entire package you’ve pulled together for these shows is pretty heavy duty. There’s some staunch supports coming along with you on this one.
It’s mutually beneficial. The bands that support us, their fans might hang around to watch us if they don’t normally come along to watch us, and those bands get to  play in front of our fans. But with this line-up, what it comes down to is that we got a bunch of friends, we don’t get to see them that often, so we might as well put them on a tour and then we get to see them every day. The guys in Antagonist AD and Xile are both from NZ and they’ve been friends for close to a decade now, and we don’t get to see them that often, and now that they’ve got fresh music out we thought, let’s put them on a bloody tour so we can hang out with them.

You’ve got Alpha Wolf on the tour also. That’s going to be a boost for them considering the year they’ve had.
We want to show our support and solidarity with bands that we think are hard done by. Obviously there’s been this kind of situation before with the Decapitated saga that ended up with me testifying on their case and helping get them out of gaol, so to have another situation where, behind the scenes there’s a lot of information that’s contrary to what they were accused of… we’re privy to that kind of information that maybe the public isn’t, and so us taking them out on tour is just us displaying to them and their fans that we’re on their side and we don’t want anything to slow them down. They’re a great band and they’re on a great path at the moment and anything we can do to help them out, we’ll do.

When something like that happens, it must really bring the rest of the band together.
We haven’t had anything that horrible happen to us, but we’ve seen it happen to others and it really can rock a band’s world. Especially when you do it for a living. It’s like someone coming up to you at your day job and saying all these things about you that aren’t true and all of a sudden you get locked up in gaol, you can’t pay your rent, your kids are missing you… it’s crazy. So, knock on wood, we haven’t been through a situation like that, but we’ve seen it happen to friends of ours, and it’s horrible.

Thy Art is Murder is more or less a “chart” band now insofar as your last four releases all charted in Australia. Do you feel that puts you under any kind of pressure when it comes to the next album or the next release?
No, it makes me excited. I see every step up we take as a new opportunity and I don’t really get scared by opportunity, I get excited by it. So every time we do something a little bit better and people like it a little bit more, it just makes me more stoked to take it to the next level for ourselves and them.

You obviously do most of your touring outside of Australia these days. Do you find the scene here to be restricting on the band when it comes to touring at home?
I find it incredibly restricting. We played several shows last month to more people than we an play to Australia in a whole year. That’s insane. We played a show the other day to about 20000 people and the amount of tickets available on this upcoming tour are about 3 and a half thousand or so and on a headline tour it’s about 5000. So that’s two tours a year that we can play, because you can’t really tour Australia much more than that, and that’s less than 10000 people in total. And we played to 20000 people two weeks ago – at one show. So it’s incredibly restricting and frustrating to see how tiny in comparison the market for very heavy metal in Australia is.

Obviously we have bands like Parkway and The Amity Affliction that are wildly successful, and that’s a step down in terms of the underground nature of aggression that’s present in the music – not to take anything away from them – but it is a lot more difficult for us to get that audience in Australia. So it’s a bit frustrating, but all we can do is keep touring, keep making records and try and help grow a scene for very heavy, aggressive music is Australia. We’re the biggest death metal in the history of our country. If we don’t do it, who else is going to? So we’ve just gotta keep doing it now, play as many shows for the younger kids and hopefully the bands that come after us – Make Them Suffer, Aversions Crown – it’s going to make the scene better for bands like that as they come up. 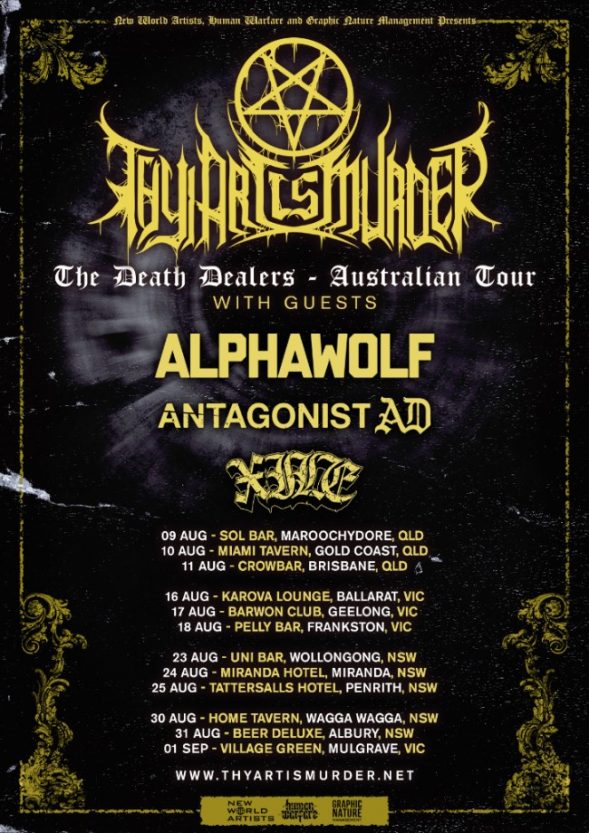