Home > Features > To the Grave: Oh, the Horror

Sydney deathcore unit To The Grave recovered from tragedy this year with a signing to the legendary US underground label Unique Leader for their latest album Epilogue. That should have led to a national tour with Earth Caller that was close to selling out, but COVID, of course, sank that and possibly ever other show they have planned for the foreseeable future.

On the bright side, To the Grave was part of the first announcement for December’s immense Knight and Day Festival, headlined by Parkway Drive and Polaris. We got drummer Dane Evans and vocalist Simon O’Malley on Zoom for a chat about their plans and what else they’ve been up to since they’ve had to come off the road.

Hey guys – how have you been dealing with things since lockdown?
Simon: In between working as an “essential worker” and getting band stuff together, it hasn’t really stopped for us, to be honest. We’ve been pretty good at keeping ourselves busy over the last couple of months.
Dane: We’ve been writing music a lot lately. We’ve been collaborating while everyone’s been away.

Has it been hard to do that because you can’t all get together?
D: We had to adapt to a different environment. I think we find the fun in that, anyway. We’re always trying to find ways to work from home on what we do. It sucks that this is the only choice we have. It would be cool to see each other, but we kind of planned for it, I guess.

It must be particular hard for bands, especially for those like yours who have worked particularly hard over the last couple of years to really build something, and then to not to able to work for almost two years now – that must be incredibly frustrating.
S: Yeah, I guess it’s hard because all you can do, as a band at times like this, is put out music and content. You can’t even get together in a room and shoot a video. All you can do is release  music. We’ve had to, and I guess everybody’s had to, adapt to working from home and doing the video conference thing. Luckily we managed to find a way to make it work.
D: I like how you put it Simon, when you said, a couple of months ago, “It feels like we booked tickets, got accommodation, got all our luggage together, got on the plane – and the plane’s just sitting on the runway!”

Well, now you’ve got Destination Parkway Drive. If nothing else, what a way to close out a pretty crappy year. You couldn’t really ask for anything better.
S: Absolutely. We had sort of a false start with that Thy Art show at the Metro that was supposed to happen, and then that was literally the day before the lockdowns started to happen.
D: For such a big, influential venue in Sydney to take a hit like that, we’re all keeping our fingers crossed.

Are you guys worried that so many venues will be hit by this that there might not be any venues?
D: There’s two sides to that. Me and Simon were talking about that the other day. Yes and no. You can look at it like, a year ago, we wouldn’t pick that we’d be playing in a castle, but this made it happen! So you’ve got to make the best of a bad situation.

The line up’s pretty amazing. You guys  must be stoked just to have been asked to appear.
S: Definitely. It’s one of those things where, the line up’s so strong that if we weren’t playing it, we’re going on matter what.

Unify is on three weeks later, but this is really a much heavier event.
S: It’s a weird one, because you’ve got the acoustic stages in one part of venue, and you’ve got some of the heaviest acts coming out of the country in another.
D: At the end of the day, getting to play with Parkway Drive… you can’t ask for anything better.

You’ve said you haven’t just been sitting idle, so what exactly have you been doing during this time?
D: The big thing is, we want to be able to give some live music to people, so when we can get together, we want to record something live. Due to the uncertainty, it would just be good to be able to do that. Writing a new album is also exciting.
S: There’s a bunch of stuff we’ve wanted to do for a while, like recording a live set, where we’ve thought, there’s no better time, if ever there was a time to do it.

Your album didn’t come out all that long ago, so having the opportunity to do another one so soon must be refreshing because otherwise you would probably have been busy with touring.
D: We’d probably be touring off that album now, and we still hope to! But it’s a little bit of what you said – what else is there to do?
S: We have an east coast run that’s in jeopardy, and that was supposed to be for this cycle. It’s been a few months since that record dropped, and it feels like two years!

Are you a band that’s always able to put down new ideas, or one that finds it harder when there’s always rehearsals and touring going on?
S: I guess the next concern for us was that, so soon after that last record dropped, we were already thinking about the new material. Up until that point, the east coast run and a bunch of other touring was going to be happening until the end of the year, so we were wondering when we were going to get the new record in. When it was going to fit into our schedule.
D: With a little bit more context, we were always working on things. We got used to, when our record’s been delivered and we’re just kind of waiting for it to come out, and waiting to tour, that’s when we are at our most creative. When we can’t actually fix what we’ve just done.

It’s such a huge event that you’ll be on, if you weren’t playing there yourselves, who would be your go-to acts to see?
D: We’ve got so many friends in bands that are on this bill… The Beautiful Monument, The Gloom in the Corner, Void of Vision… the first half of that line-up…
S: It’s a third of that line-up!
D: The second half is our idols! 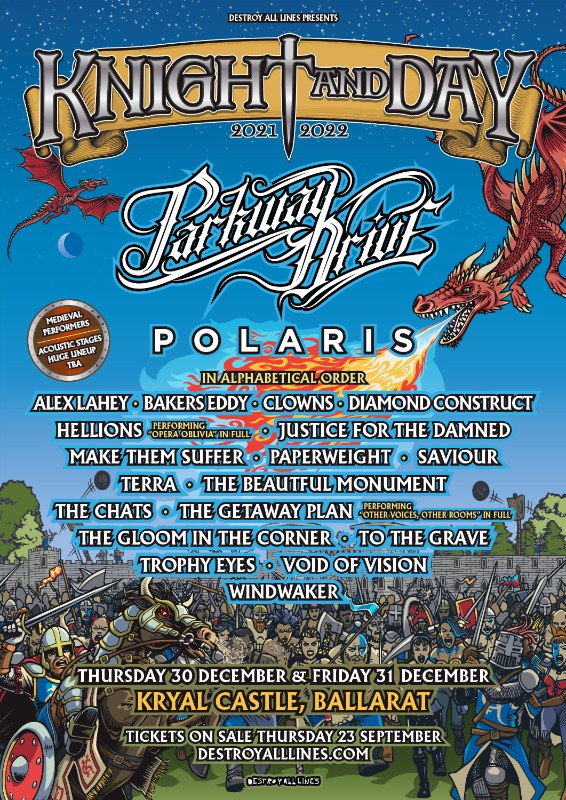