Following a six year gap between releases, Vanishing Point were keen to get out on the road in late 2021 in support of their sixth album, Dead Elysium. After a long break from any sustained gigging, the Melbourne five piece had their first national tour in ages mapped out and ready to go. Given the timeframe, no one should be surprised about what happened next – COVID restrictions brought those plans to a screeching halt.

It was a blow for a band who had already faced issues completing the album due to singer Silvio Massaro’s poor health at the time, but after almost 30 years as a band, Vanishing Point isn’t about to let that keep them down. Next week, they head out on the tour they should have done six months ago.

“It’s kind of a weird feeling after so long,” says founding guitarist Chris Porcianko. “The album was released in August 2020, and with any band you usually hit the live circuit a month or so before, during or just after the album release. This time it’s coming up to two years since the album was released.”

That’s probably hardly going to matter considering how established they became on the Australian metal scene with the albums Tangled in Dream through to 2014’s Distant is the Sun, and Porcianko is itching to get back on stage even in no one’s there. Which is unlikely.

“A lot of bands are probably in the same situation as us, and we don’t care if there’s 10 people there, or 100 or a thousand. We’re looking forward to just getting out and playing,” he says. “Because we haven’t played in so long, and during the pandemic there were times when we couldn’t even rehearse, it’s made us think back to what we were originally doing this for, and that’s to play live and have fun, as musicians.”

Vanishing Point has seen a lot of changes since the 90s. Members have come and gone, opportunities invariably missed, but they’ve also shared the stage with some of the biggest luminaries in heavy metal music including Iron Maiden, Nightwish and Helloween. Regardless of how the pendulum has swung, Porcianko has been there, and has no plans to abandon ship.

“I’ve been in this band for a long time, and I love creating music with the guys in Vanishing Point. It’s something that, I suppose, has been therapy for me, in a sense. If I was to give it all away, I’m not sure what I would do. I would probably do another couple of projects, but I still love doing music with Vanishing Point. Even some of the members who used to be in the band years ago – we still get along. Unfortunately, with time, life and priorities change, but I’m grateful that I’m still doing it, when a lot of bands probably wouldn’t be. We’re grateful for the gigs that come up, and we just like to keep grinding away, and plugging away.”

If there was an upside to the pandemic, it was the time it allowed the band to write more songs. With a six-year break between their last two albums, and a seven-year gap before that, Vanishing Point’s next full-length might get underway much quicker.

Not that Vanishing Point exactly struggles with writing. Dead Elysium’s ten tracks clock in at almost exactly an hour, and would have been even longer but for one final song they weren’t able to finish in time for the album to come out.

“There was one song left over that we couldn’t do because Silvio got sick. The last song he did in the studio was Free, and then his voice blew out and he had really bad issues associated with his Crohn’s disease. So we thought, ‘We have 95% of the album done, let’s release it’. The last track we had the music for, but we didn’t get to record the vocals. So that’s probably going to go on a future release, or we might do an EP or something between releases.”

As for the live set, Porcianko reveals that it’s likely to be heavy with songs from the latest album, tunes they haven’t yet had the chance to play live.

“There’s going to be a bit of a concentration on the Dead Elysium album, but there will definitely be a couple of older songs in there.” Without giving anything away, he goes on. “For example, one of the songs we’re playing, we haven’t played for 15 years. The first time I got back on the guitar to play that song, I was like, ‘What was I doing there?’ But muscle memory prevails, even after that long of a time.”

After such a long time away from live performance, Vanishing Point is sure of a warm welcome by those who have waited years to see them again. But whatever happens, it’s all about having a good time and getting back to being a live band. 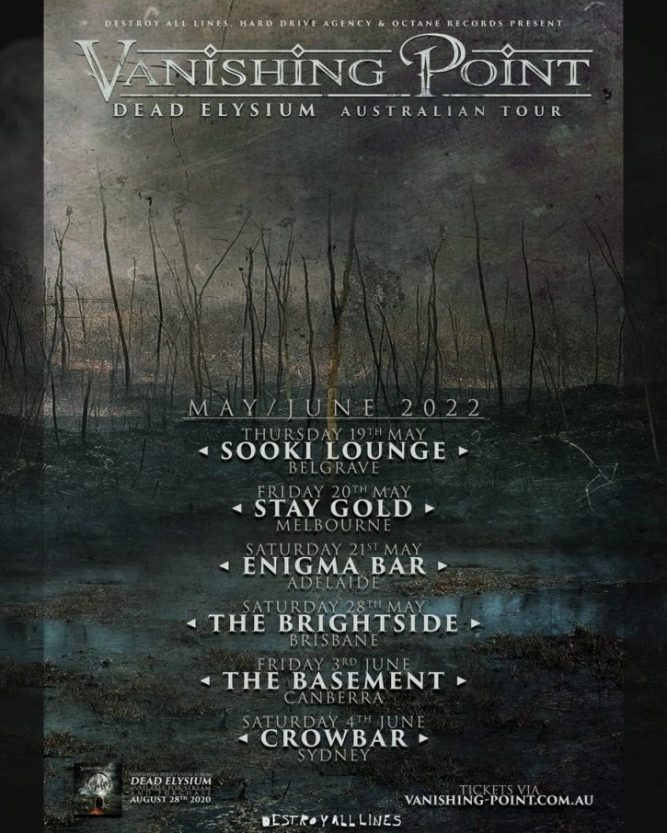