Voivod: The Next Dimension

Home > Features > Voivod: The Next Dimension

In 2000, Canadian metal innovators Voivod headlined the Metal for the Brain festival in Canberra as part of their first – and so far only – Australian tour. At the behest of festival curators and Voivod tragics Alchemist, the band were the first foreign act to ever appear at the annual fund-raising event.

“It has been a long while,” says drummer and founding member Michel “Away” Langevin, the only one of the current line-up who was in the band on that tour. “I do remember that tons of people were at the festival in Canberra. We drove everywhere from town to town, which was pretty amazing for us, and we met the singer from King Parrot as he was driving us around from the airport and so on. But it’s funny, the biggest memory was that after every show, people would bring us down a corridor to a big room where there was a party! A raging party. We had an amazing time.”

Almost nineteen years since that visit and one of metal’s more interesting units will return to Australian venues in March as they tour in support of their latest album The Wake, their fourteenth. It’s the first album with the current line-up that also includes vocalist and founding member Denis “Snake” Belanger (who was replaced for a while by Eric Forrest), guitarist Daniel “Chewy” Mongrain and new bassist Dominique “Rocky” Laroche who joined Voivod in 2014.

“It was three years in the making,” Away says, much of it due to the turmoil surrounding the departure of previous bassist Jean-Yves “Blacky” Theriault who had rejoined the band in 2008 after a 17-year absence. “Luckily we were able to do demos on the road, in the bus and backstage. That helped a lot. You never know what to expect, but it’s doing very well and it’s great for us to be able to follow a path of more prog rock in our music.”

Heralded in the early 80s underground for the raw and noisy thrash on albums War and Pain (described by one critic as ‘painful, uneven, coarse and vile’) and the wonderfully titled Rrröööaaarrr, Voivod drew wider attention for the progressive Killing Technology and Dimension Hatröss albums and the wildly experimental, jarring 1989 opus Nothingface, a spacey, freak-out of a record notable for its sci-fi theme, spidery, obscure cover art and the band’s version of Pink Floyd’s ‘Astronomy Domine’. In the early 00s, they caught the spotlight again when mega-fan Jason Newsted joined in 2002, but tragically lost impetus when original guitarist Denis “Piggy” D’Amour died of colon cancer in 2005. Of the three albums that line-up recorded, Katorz and Infini were completed after Piggy’s death, all following the band’s angular creative ethos.

“We’ve tried to explore as many styles as we can and not been too conscious about what’s been going on in the scene. It’s played against us,” the drummer admits, “but in the end we’ve had a steady career and made some good records. Back then, Piggy was listening to prog rock, Snake and I were listening to hardcore and Blacky was into alternative music like Bauhaus and Killing Joke and we were able to morph it into Voivod music. All through the line-ups it’s been interesting, because I was there all the way through and everytime there’s a new line I change my style a little and it’s always captivating for me. With Jason it was almost a stoner rock approach like Geezer Butler, but with Rocky it’s definitely more fusion.”

Trying to plot Voivod’s artistic path has never been easy, and there have been moments, particularly 1991’s Angel Rat, that haven’t gone over well, although Away concedes that over time that album has become much more warmly regarded: “It’s been a long time, and now that’s many people’s favourite!” They have never been a band to stay within strictly confined musical constructs.

“We have a very diverse catalogue from Rrröööaaarrr and Killing Technology to Dimension Hatröss… there’s a lot of difference musically. We tend to explore a lot of territory, so a lot of album like Angel Rat are very different from the rest of the catalogue. Now it’s elements of all the different eras with a new twist so it’s a very futurist Voivod sound. There’s a grind-thrash-funk element on there and there’s a lot of fusion and prog involved.”

The focus for this tour will be the first seven Voivod releases with several tracks from The Wake, which continues some of the themes explored on Dimension Hatröss.

“Dimension Hatröss is very close to The Wake,” the drummer explains, “with the interludes and characters coming back into the story and Phobos was like that as well. It’s always fun to work on a concept album. It’s a lot of extra work but it really pays out in the end. We are just happy that people really dig the new one and we’re trying to promote it as much as we can on the road.” 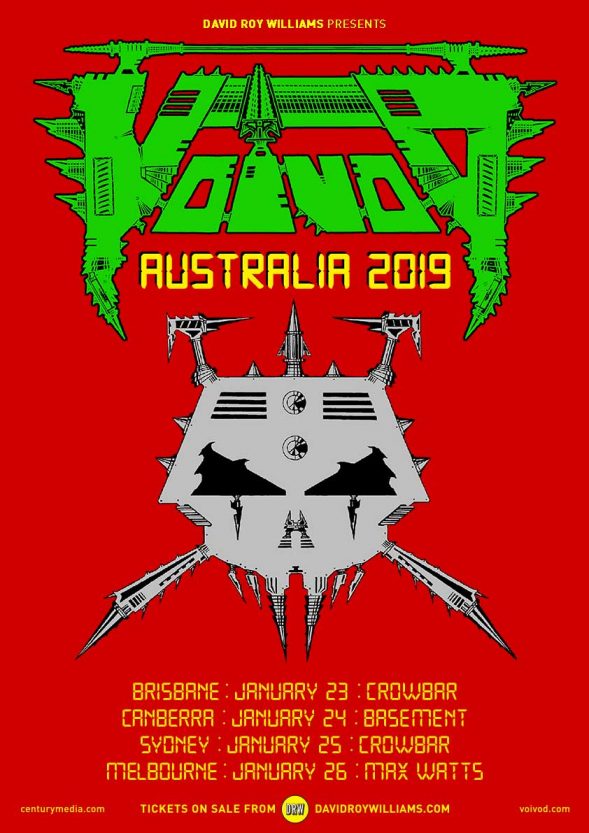