It’s been a little over fifteen years since a band with a unique take on progressive metal arose from the hotbed of music that is the city of Perth. Voyager’s combination of multi-layered melodic progressive metal with hook-ridden pop was as infectious as it was refreshing, a strange melange of uplifting harmonies and wistful melancholy that has since taken them all over the world. The band’s latest and sixth album Ghost Mile presents a darker face than previous album V, which founder and frontman Danny Estrin suggests is somewhat curious.

“When I listened to it from beginning to end for the first time, when I got the masters back, I really felt that this is really eerie, a little on the melancholic side,” he says. “Interestingly enough, we played around with a lot more major keys and a lot more Lydian scales and things which generally gives a bit more of a positive feel, so for you to say it’s darker is interesting because that’s the opposite of the way it should feel. ‘Ascension’, the single, for example, the entire verse and the entire chorus is in a major key, but it’s still got this eerie, Stranger Things kinda vibe going on about it. Someone once described it as uplifting melancholy, and I think that’s hit the nail on the head.”

Voyager has seen quite a few line-ups come and go over the years. Apart from guitarist Simone Dow, who joined in 2005, the other longest serving member is bassist Alex Canion. Drummer Ashley Doodkorte and guitarist Scott Kay are the most recent recruits. Both had come on board in time for V, making Ghost Mile only the second album to feature the same personnel as the previous one. For Estrin, that is an extra boon for songwriting and the creative process.

“It’s made it so much easier because I know what everyone is thinking, there’s no bullshit, I know people’s style, they know my style and it works really really well,” he explains. “The songwriting process has been phenomenally easy and ideas kept coming in and it gets to the stage where, if something’s shit, you just say, ‘You know what, that sucks. That’s just not working at all’. And you might get a little upset but you might come back to it later on and perhaps develop a song out of it. We had, for example, one half of a song where we thought, ‘We just don’t know where this goes’, and then one day only two of us had a jam and it became something and we took it to the rest of the band and it was like, ‘Hey this is great’. But the songwriting process has become easier.”

While the creative side of Voyager has become more streamlined, the flipside of being a self-managed independent band is increasingly difficult. There is a constant need for content to keep an act in the hearts and minds of fans as bands continue to compete for attention in a market where revenue is dwindling and fans fickle and indifferent. Instead of creating, Estrin is finding a lot of his time taken up with the promotional side and administrative details that come with running a band.

“The amount of time doing things revolving around making music rather than making music itself is definitely creeping up, and that’s particularly so when you’re self-managed and you’re doing crowd-funding and things like that,” he says. “And I think that’s the future for any new band now. You have to be prepared to work very, very hard.”

There are, he points out, many things to think about that go way beyond musical considerations. Much of it is the sort of drudgery that the PR teams at record labels used to look after, developing and maintaining campaigns to sustain a band’s momentum both as they launch a new album and during the time in between releases, finding new ways to keep them in the public eye. While record labels per se become increasingly unnecessary, Estrin still feels that those PR teams are very much needed.

“People expect a high level of content, and that’s demanding,” says the singer. “To do a play-thru video, you’ve got to film it, edit it, put it up there. People expect that. We don’t have a massive team of PR people coming up with ideas and creating content for you, and at the end of the day while the internet’s great, you’ve got to know where to put things. If you even have a budget, you can’t just go, ‘Well I’m going to spend five grand on an ad in some obscure magazine in Russia’. You’ve gotta know where to advertise. What works, what’s not, and inevitably you need people for that. What’s changed is that labels are becoming redundant but the people behind the PR machine are changing their style of working and you need those people on board. The bands can’t do it.”

Estrin is actually rather fearful about Voyager becoming too much like a business: “It is a business for a lot of bands. Luckily, or unluckily for us, it’s not [for Voyager]. We don’t make a living off it, but if we did, it might stunt our creative processes and we might not make the music we do.”

Something that has worked very well for Voyager in lieu of a record deal has been the use of crowd-funding initiatives. Such campaigns remain controversial among the industry and audiences alike as arguments abound about whether artists should expect fans to help fund recordings and projects and, in some cases, both tours and day-to-day expenses, and the subsequent pressure they can put on stakeholders to ensure the quality of their output. The popularity of crowd-funding enterprises continues to build, however, and Voyager has used them for both of their last two recordings with resounding success.

“We decided to use a different model [this time],” Estrin begins, “which is Pledge Music. It’s more of a pre-order campaign, I guess, but it has the same elements as a crowd-funder. If people want to do it, they can do it, if they don’t, no harm done. They can buy it though the usual channels. It works so well because we have really die-hard fans who want to have that personal experience with us. I don’t know why,” he says with a laugh, “because we’re all arseholes! But people want to interact with us. You really get to have your finger on the pulse of your fans that way.”

Fans are something of which Voyager has plenty, and the numbers continue to grow. No less a name than Chino Moreno has sung the band’s praises and they have become increasingly in demand as a touring act both domestically and overseas. They were the first Australian band to appear on the US leg of the ProgPower festival and have traveled through North America and Europe both as support to bands like Opeth and Evergrey and as headliners. In Australia, Voyager’s popularity as a live band has seen them added to tours beyond the usual metal circles.

The idea that a nominally metal band could have the temerity to identify with or accept a gig opening for anything other than another metal band always rubs some people the wrong way, and for some reason Voyager copped flak for getting the nod to play with the Deftones. It’s not something Danny Estrin is too worried about.

It’s paid off. Estrin reckons that Voyager has appropriated new fans each time they’ve appeared with bigger acts, even the ‘non-metal’ ones. Being a band that’s always been difficult to positively classify has reaped rewards.

“It’s a catch-22 because we’re difficult to categorise. That’s been our problem. But when people are exposed to it and they hear it, they think it’s awesome. We still play metal shows, but we’re not going to say no to the opportunity to be a part of something that’s outside our genre. I guess that’s testament to the fact that we have a wide reach, and I like that.” 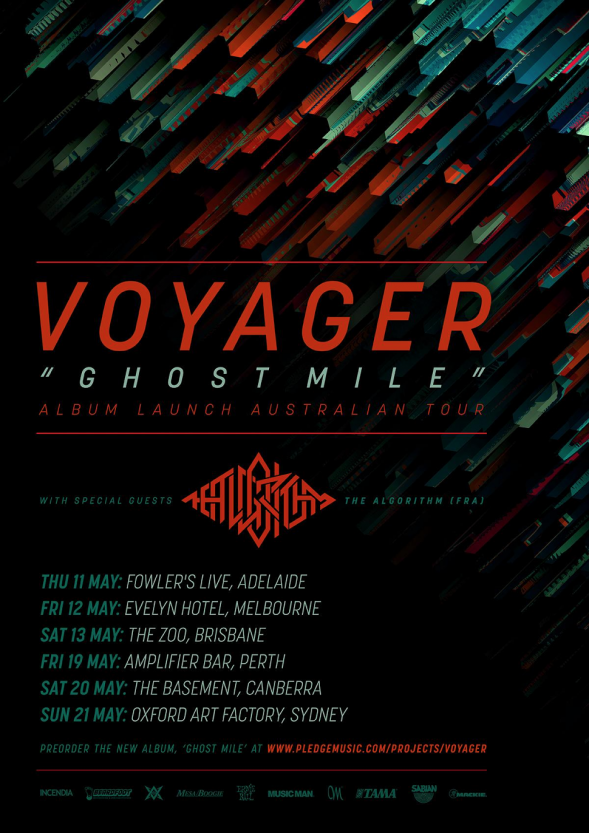