Wednesday 13 is about to make one of his regular trips to Australia in March, but this time he’s bringing only long-term guitarist Roman Surman and acoustic instruments. We chatted with Wednesday about his unique intimate performances and his shiny new deal with one of the world’s biggest metal labels.

Hi Wednesday, I just read the good news. You’ve picked up a deal with Nuclear Blast.
Yeah, we finally got to announced that today. I’ve had to bite my tongue, but today we announced it, so all is good.

That must be very good news because you’ve been without label representation now for a very long time.
Yeah, for too long. For my 2008 record Skeletons I released it through a label for Europe and Japan, and in the States I released it through a little independent label and that sort of set up the whole DIY thing. Since 2011 I’ve been self-releasing and crowd-funding records, which worked really well. I’ve been doing the crowd-funding and pre-ordering albums online thing before it became a big thing, I had a bit of a headstart with that and that worked out really well for me. Ever since then things have been fairly consistent for me – every year we’ll go on tour and we’ll play the same places and that’ll be sold out, so it’s been consistent. Over time, my band, we’ve been together a long time now and I just turned 40 last year and this is my job and I want to do more, so that’s why I’m looking forward to this record being the biggest and best thing we’ve ever done. That’s why we got a producer to do it and we shopped it around until we got the label we wanted.

I held out for months and months until I got on Nuclear Blast, which was what my whole plan was. This is going to open up so many doors for us, so it’s going to be a good little run this time with this album and tour.

You had it in mind to go with Nuclear Blast then. What made up your mind to hold out for them?
Well, there’s a lot of behind-the-scenes stuff. I know a lot of people who work for the company. Our A&R guy Monte Conner was the guy who first signed me to my contract with Roadrunner Records with Murderdolls. He’s transferred there and he’s also a music fan and he’s signed some of the biggest, best bands that we all know about. Type O Negative, Fear Factory, Machine Head… he’s signed all these bands and he’s been a fan of what I do for years so when he heard the new album he loved it and we worked a deal out. For me it’s all about having a team. I’ve been doing this for a long time, this is my fourth, fifth record deal – I don’t even know anymore. I’ve been on labels and dropped off labels and I know that the one thing that matters is having the right team and I don’t think we’ve really had good labels working for us before. It’s just been sporadic and people who don’t really know what’s going on. But this feels more like a team. The people at Nuclear Blast are working together and there’s people there I’ve worked with before who I have high respect for. And looking at the roster they’ve got: Lamb of God, Machine Head, Fear Factory, Hatebreed, Opeth… there’s so many bands that are great bands and friends of mine as well. It was just so important to get on a legit label and show everyone just what Wednesday 13 is. We’re trying to get on a different level.

Is Monte the reason so many bands seem to have moved to Nuclear Blast now?
It seems that way. It’s something that I’m really proud to be a part of. As I said, a lot of these guys are my friends and we’ve been on the same label for years and to see all these guys that I have respect for, Machine Head, Hatebreed, all those guys on the label as well, I know that it’s a good home. It feels like I’m not moving into a strange place, I’m moving to a place where a lot of my friends are and some of the most respected bands in the world.

That must have made things a lot easier, because I suppose that when you move to a label after being independent, you do lose some of that independence but it also makes other things simpler.
Well I’m always going to be independent. Right now I don’t have a manager: I manage the band. I have an agent that I work with, inside the US and out, just for shows and everything, but everything else, I do it. That’s why i want the label to be involved. I know how to make records and I know how to tour and I know how to put on a show, but now we have the label on the other end to help us reach that audience.

Your upcoming Australian tour is going to show off a different side to Wednesday 13.
Yeah, you get to see the raw, unplugged, acoustic, campfire version of Wednesday 13.

What is the concept behind that, because it’s a whole new type of thing for you to be doing.
Yeah, and I think some fans when they hear that say, ‘Acoustic Wednesday 13! What the hell’s going on?’ and I’d be the same way! But I tried this idea in 2013 in the UK, I did ten shows there and it went over great! It was terrifying for me because it’s just me and my guitarist Roman [Surman] sitting there on stools exposed, no drums, no lights, no crazy costumes or make-up. It’s just basically us in our day clothes coming out with acoustic guitars and it’s my career in music and there’s stories that go along with it and if  you got any questions, I take questions from the audience. It’s a stripped down, live meet and greet with song.

When you deconstruct your material that way, did you develop a new appreciation for some of your songs? You have to look at them in a totally different way, don’t you?
Yes, and some songs don’t work. I’m doing all the stuff from over the years from Murderdolls to [Frankenstein] Drag Queens from Planet 13 to the solo albums and I’m taking two songs from each and presenting them. Some sound amazing acoustic and some fans come in, they hear about the show, they hear it and they’re like, ‘Whoa, that really does sound great acoustic.’ So it’s kinda exposed for me and it’s nerve-wracking because I don’t have all my gadgets to hide behind, but it’s also a really rewarding show for me when I get down into the audience and have them on their feet for two and a half hours and I’ve had people tell me after the show that they’ve seen me ten times but that was the best show they’ve seen in my entire career.

So you’re playing for two and a half hours?
It just depends on the audience. Basically we start the show off with a Wednesday 13 set, and that usually goes for about an hour and a half, an hour forty-five. It depends how interactive the audience is. If the audience asks questions, it can go on for a while. I have a list of songs and a list of stories I’m going to tell, and when the audience asks questions that can go off into another song or another story that I’d forgotten about and that can lead into another round. So it’s quite an unpredictable show. Then we take a really short intermission and I come back out with my Bourbon Crow project, what I call my drinking project, my country project. We come out and do a mini-set of that to end the night. It started off as a drinking band, so it’s a rowdy set. We save the rowdy part for the end because the rest is a fairly quiet, story-telling part.We couldn’t do the Bourbon Crow thing first and get everybody wasted and drunk, so we kind of do it backwards.

In a way then these shows are really directed by the audience – it’s up to them what you play and how long it goes for.
Yes, and that’s what makes it cool and that’s what makes it special and that’s what separates me from the bands that I’m always associated with. If I could go see Alice Cooper doing an intimate show with just him and his guitarist, how cool would that be? For any artist that you like, for them to do a personal, stripped-down campfire type show is just the coolest thing ever! It worked great in the UK, and we just finished the US with it and it went awesome and I know that it’s gonna be killer in Australia. When we’re finished up with these acoustic runs we’re gonna have a month and a half to rehearse and build our stage, and in May we start touring for the new album. It’s world domination after that! 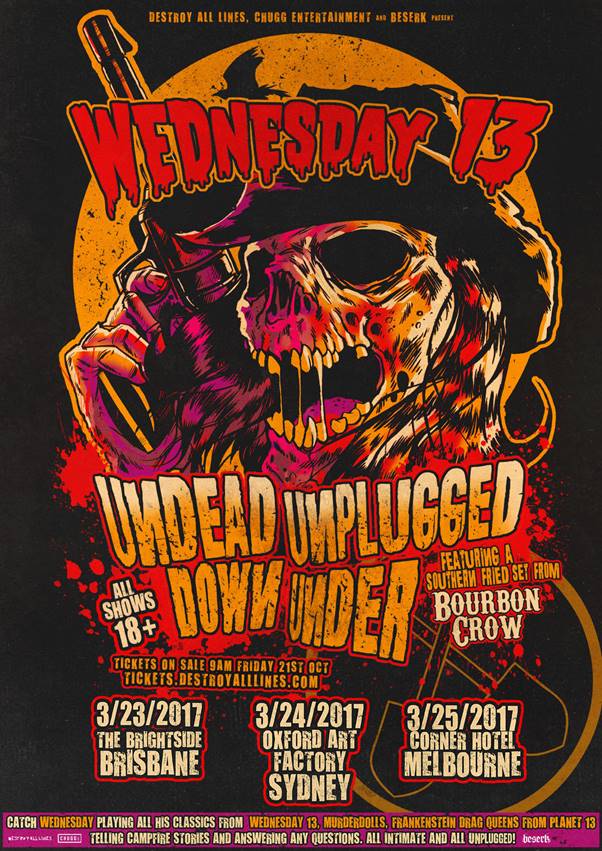