Wendy James: Straight From the Hip

Ask anyone who was around in the late 80s and early 90s, and they’ll remember Wendy James. When her band Transvision Vamp burst out of England with hits like “I Want Your Love” and “Baby I Don’t Care”, James became a megastar.

At the height of the mania, Transvision Vamp peaked at #1 in the UK and #2 in Australia with their second album, the ARIA Platinum-certified Velveteen. During their subsequent Australian tour, things got so wild that riot police were called to their Melbourne concert and TV news bulletins were filled with images of frenzied fans.

“It was a great time, so much fun, and I’ve got really fond memories of Australia,” James recalls.

“It was a total blur but I remember playing a packed Hordern Pavillion in Sydney, I remember the crowd going wild in Melbourne, fantastic gigs in Brisbane,” she tells Loud from France, one of her several habitués today.

Transvision Vamp dissolved in 1991. James then recorded an album with Elvis Costello (which she now calls “overly saccharine”) before largely disappearing from public view. But interest in the blonde bombshell never completely subsided – and in 2008, Sydney bar baron Justin Hemmes brought her to the Harbour City for appearances and DJ gigs at his club, The Ivy.

The month down under gave James time to reconnect with the local music scene. Sydney photographer James Traill became a close friend; later, her 2011 album I Came Here to Blow Minds was partly recorded at BJB Studios in Surry Hills after an offer from music producer Scott Horscroft (now EMI’s A&R boss in Australia).

All the while, James became a prolific songwriter and producer, and her music industry cred kept climbing. By 2016 – when she released her next album, The Price of the Ticket – the instrumentalists included James Williamson, Patti Smith’s guitarist Lenny Kaye, the Sex Pistols’ Glen Matlock, and James Sclavunos from Nick Cave and the Bad Seeds.

The supremely talented James played multiple instruments, produced every song on the album, and wrote each song bar the last two tracks: covers of songs by Fred ‘Sonic’ Smith and Bob Dylan.

Now, James is completing her next album, the self-written and self-produced Queen High Straight. If two teaser tracks posted to Soundcloud are any indication, it will be another tour de force.

Asked about the intriguing title, she says: “In my imagination, I was a queen, I was high on my achievements, and I love shooting straight from the hip.

As for the album’s content and style, James explains that she has multiple influences and dips into various genres – but her mainstays are the New York punk/alt-rock/new wave sounds she loves, coupled with her trademark razor-sharp lyrics.

“I’m a New York-centric kind of person,” says James, who has a home in the Big Apple.

“Whether it’s The Velvet Underground in the ’60s or the CBGB scene – Patti Smith, Television, Richard Hell, Talking Heads, Suicide, all these guys – that’s the ballpark of my favourite music.”

In line with her take-no-prisoners image, James is a true indie artist who releases her own music and even self-manages. She’s embraced the independent, pre-order music delivery model and Queen High Straight can now be purchased on pre-order at her website, www.thewendyjames.com.

The 20-track album is due to be released in October on gatefold double vinyl, deluxe 2-CD, regular CD and digital download.

“I think the tide is turning and many people are wanting something physical and something substantial,” she says.

“If it’s going to cost you as a fan 20 to 50 quid, then it’s got to represent the artist and give you something to get your teeth into. It took me one year and two months to write. The process of finding the money and doing the recording has taken me nearly two years. By the time you spend your money on owning this record, that represents three years of my life’s work – and it’s fucking worth it.”

In a world where musicians are media trained and stage-managed to within an inch of their lives, things haven’t always been easy for the forthright, no-bullshit James – but the stars seem to be aligning for her. The day she spoke with Loud, she’d inked a deal for a large tour of the UK with the Psychedelic Furs in October, the same month Queen High Straight will be released.

“I want to tour Australia too,” she says, revealing she’s had preliminary discussions with a local promoter.

“I’ve always had a strong connection to Australia. One way or another, I’m going to get back there!”

Queen High Straight by Wendy James is now available on pre-order at www.thewendyjames.com. 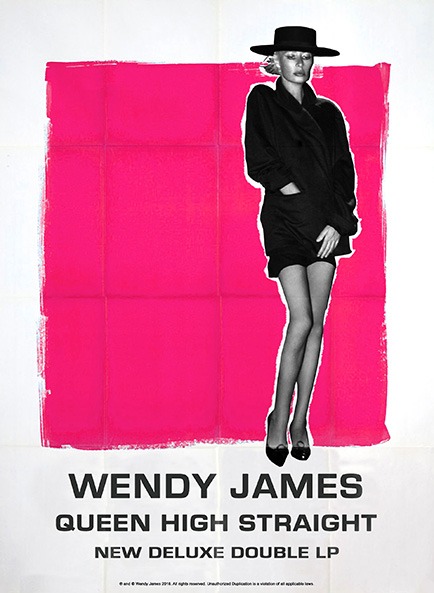