X: The Power of Three

X is a band with a unique place in Australian rock. Formed in the aftermath of bassist Ian Rilen’s departure from Rose Tattoo in 1977, they tore through the burgeoning rock scene of the time with a raw, untamed noise. Often breaking up when they could no longer stand each other only to regroup a year or so later, they never had a mainstream hit but their records would stay on independent charts for months – sometimes years – at a time.

“We never had a commercial hit, and to have the impact we did is rare,” suggests the band’s only surviving original member, Steve Lucas. “There’s not many bands that can do that. It’s unique in that respect that we had such an impact with no real commercial success. I’m constantly getting people from bands like the Hard Ons… Tim Rogers from You Am I as a very obvious example… saying that they got started because they saw us play and thought that was the best thing they ever wanted to do. Little did they know!”

Hitting the scene when they did, X’s unadorned high energy style naturally got them labelled as a punk band and their DIY ethos and aesthetic certainly appealed to the punk crowd, even if they were aiming for something more “in the line of something like AC/DC”.

“We got called punk instead of a rock n roll band, but that’s basically what we were,” he says.

The band took the rawness of their sound pretty seriously: “Everyone else was using chorus pedals and shit on their guitars, so I didn’t use any effects at all. Ian had his colossal bass sound, Steve [Cafiero] had his beautiful Ludwig kit that he used to bash the shit out of. It was a helluva lot of fun.”

The fun, of course, was mingled with the tragedy of Lucas’ schoolyard friend and original guitarist Ian Krahe’s death from a heroin overdose in 1978 after a gig at the Bondi Lifesaver.

Death has been a constant companion for this band – a few years after leaving X, Carfiero died from medical complications while undergoing treatment for a bad back in 1988 and Rilen succumbed to bladder cancer in 2006. Peter Cataunche, who briefly replaced Krahe, and Cath Synnerdahl who was part of the band’s 25th anniversary shows, are also gone. But it was Krahe’s death less than a year after X had become fully activated, however, that would have brought any other band to an end.

X, it’s safe to say, weren’t any other band. A year later they went into Trafalgar Studios with Lobby Loyde and recorded X-Aspirations in five hours. Lucas had been playing guitar for three months.

“I listen to it these days, especially X-Aspirations, and I hear jazz influences, I hear swing… but at the time it was more like, ‘Well, that sounds good, we’ll do it like that!’”

Almost exactly 40 years since X first cranked up their amps and Steve Lucas is going out to recreate it all once more. He is keen to make it as genuine as possible, going as far as producing gig posters featuring a huge hand-painted red X splashed across various front pages of the Sydney Morning Herald from 1977. Sydney’s version has the dateline of October 23, when X first played live at the Bondi Astor.

“I was in Richmond (Vic.) this morning near the Corner Hotel and there’s two double sheeters up there,” he says, sounding very pleased. “I just thought, ‘Oh my God, just perfect.’”

“It’s important for me for it to be authentic. I want it to be authentic but I’d like to cut the shitty parts out!” He laughs. “Some people think that the more we fucked up, the more enjoyable it was. Other people liked it when we really nailed it. I’m going for the really nailing it approach, but I am only human so there are bound to be a few little hiccups along the way.”

Earlier this year, Lucas put the call out to his fans to help him fund an X best of record, a limited-edition vinyl-only collection of tracks from the band’s first active period. X-Citations: Best of X The Early Years 1977 – 1983 is fifteen songs culled from live takes, demos and other early recordings, including X-Aspirations. Steve and his wife have since been driving around Melbourne hand-delivering copies of the album ahead of the 40th anniversary shows that kick off at the band’s spiritual home, the Prince of Wales in Melbourne, on July 14.

Completing the band this time is Kim Volkman, who has featured with X before as well as being a long-serving member of Rilen’s final band The Love Addicts, and Lucas’ long-time friend Doug Falconer of Hunters and Collectors.

“Kim is the most authentic X bass player post-Ian,” Lucas says warmly. “There’ll never be another Ian, but that isn’t necessarily a bad thing. And I say that with love and affection and deep-seated knowledge. There is a physical resemblance, and Kim played with Ian for many, many years so it’s only natural that he’d pick up habits. He’s a really nice guy and I love working with him, and Doug I’ve known for years because he married Ian’s ex and we did an album together back in the early 90s. It’s still got the X family vibe, is what I’m getting at now. If you can’t hang out and have a yarn, there’s no point getting on a stage and playing music with that person.”

The relationship between Lucas and Rilen was a dynamic and often problematic one. At times they were extremely close and at others it was best for them to be far apart. He admits that there are moments when he can still feel the shadow of the larger-than-life rock renegade hanging around.

“Whenever anything goes wrong, I think, That’s Ian!” Lucas says, again with a laugh. “Sometimes when I’m stressed, I’ll dream about Ian and he’ll be giving me a thumbs up or agreeing that, ‘Yeah, that’s tough’. I don’t know if it’s me sometimes compensating or if there’s a life after death connection, but you never lose that. I’ve still felt the presence of Ian Krahe, 38 years after his death. When you write with people at that level and you’re living in each other’s pockets, nothing else matters. A lot of bands, they’re together for 3 or 4 years tops and then they break up and hate each other for the rest of their lives or whatever. We would break up, but we’d always get together again and then break up again. I remember celebrating the 25th anniversary and being amazed that we could do that. If Ian was here, I have no doubt that we’d be doing this together.

“We had a love/hate relationship. I loved hating him and he hated loving me!” He laughs again. “When we were close, we were very, very close, and I miss that a lot. I’ve never had another musical relationship like that. Never. Never really come close. When I think about it, I’ve done a lot of band things, but the level of sharing…” He trails off for a moment. “People talk about passion, but there’s not much passion if everyone’s on the same page. If you don’t have that tension, that, ‘Hey I hate your guts at the moment and I want to kill you, but the music’s more important, so I’ll put that energy in here’. It’s so much better than just getting along and having a sweet old time.”

Energy is a key word in describing the X experience. Their music was a release of urgent, primal energy that was reciprocated by the audience. X appeared when the Australian live music scene was at its zenith, when pubs across the country were wall to wall with punters almost every night of the week.

“It came from both onstage and offstage,” Lucas says of the feedback loop of energy a live show would create. “We would feed off what the audience gave to us and we traded blow for blow. The more they smashed chairs and broke windows, the louder and harder we’d play. At the time there was so much unemployment, so much political angst – much like now – but people were out in droves! People talk about social media and that it’s somehow like interacting, but it’s not. You get several hundred people, or a thousand people, in a pub pumping out rock and roll like that, you could tap it. You could power cities for months!”

“It’s impossible to quantify philosophically or scientifically or even financially,” he continues. “X did a gig down here with the Sunnyboys in Melbourne with 800 hundred payers down at the Croxton [in February]. That’s a big room… it was packed, there was a lot of old people there but I surprised that there was a lot of young people too there to see what the fuss was about. It was as infectious as ever. Halfway through ‘Suck Suck’ you could see people bouncing up and down and you would go ‘Yeah! Yeah Yeah Yeah! Thank God this hasn’t changed!’ It’s important. People need anchors in their life. When you’re in a band and you play for such a time, you become a living soundtrack to lives. It’s an anniversary thing, it’s where someone met someone and they later went on and got married or had kids… the music scene wasn’t just going to see a band. It was sharing a total experience.”

The rock landscape has changed significantly since those heady days. In Sydney, many of the venues X once ruled are long gone: the Civic, where AC/DC played some of their earliest shows, the Excelsior where Radio Birdman debuted, even the Sando where X played often during the 90s. Steve rues the fact that none of those places are around anymore to make their visit even more authentic by returning to a former battleground. At least the big red Xs going up around town won’t be mistaken for INXS posters anymore, like they often were in the early 80s before their superstar days.

“I nearly took Michael Hutchence’s head off over that,” Lucas admits with a grim chuckle. “It would have been a huge stoush if Ian hadn’t dragged me off. I might have connected at least once before I got dragged away. They used to support us a lot. Back in the day, the middle spot for an X gig in Sydney anywhere between 78 and 83 was a coveted spot because you’d guarantee there’d be a full house there. So INXS did a few shows with us and then they decided to do a little ‘n’ and a little ‘s’ with a big ‘x’ in the middle [on their artwork] and they turned up to support us one day and I went them!” 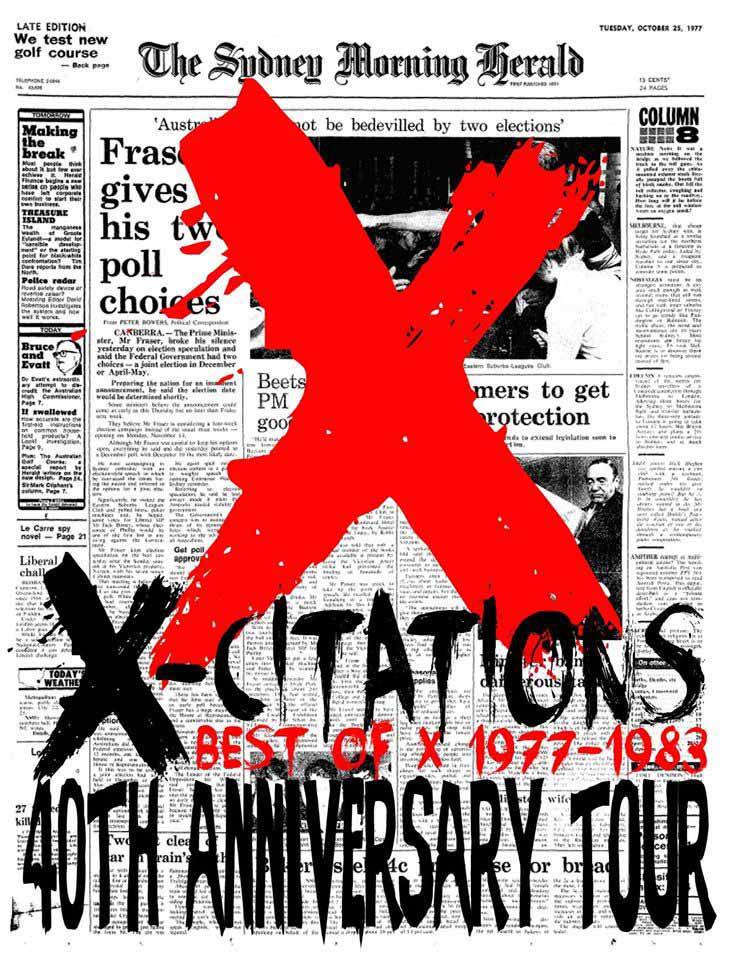