Home > Galleries > Parkway Drive: Home is Where the Stage is 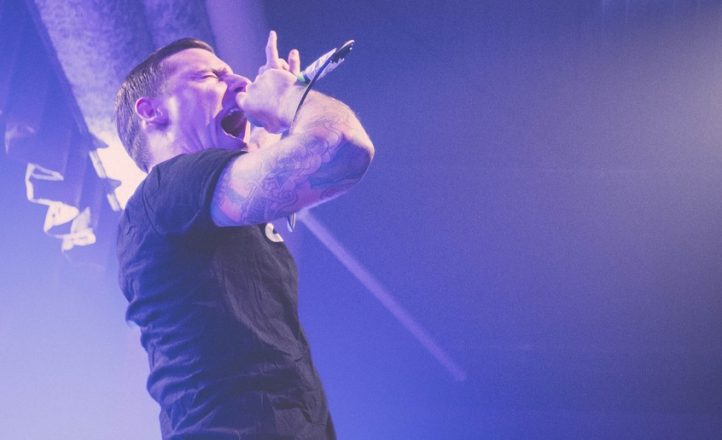 There can be little doubt that over the last decade, Parkway Drive has become one of the biggest Australian acts doing the rounds. Top Ten albums, ARIA Awards, gold records, endless sold out shows and world tours, there isn’t a mountain the five piece hasn’t climbed. As they get set for another assault on Aussie crowds on the Vans Warped Tour, Loud caught up with mouthpiece Winston McCall about their decade of achievement.

Hey Winston, great to chat with you today. How did the 10th anniversary tour work out for you?
It went really, really well. We were actually very shocked. We’d always wanted to do a tour where we played the older anthems for all these people who come to shows and yell out obscure songs and we never play them. So we basically decided we wanted to find out what older songs they wanted to hear and we did the setlist and re-learned seventeen old songs and spread them out over two whole set lists. There was a total of 27 songs played on that tour over separate nights. We thought it was going to be a bit awkward playing a bunch of old ones, because a lot of people didn’t know them, but it ended up being an absolutely amazing reaction. So we were totally shocked. It turned out to be one of the best tours we’ve done.

It must have been an interesting tour to do because some of the fans probably didn’t even really know a lot of those early songs.
It was crazy. There was fans that had been there since the beginning, and then, we played a couple of under-18s shows and the oldest person there would have been 7 when we wrote them. It was nuts to be honest. We just thought, ‘Oh my God, we are that old!’ Those songs are literally that old. It was crazy. It was literally the best we ever played those old songs, the best they’ve sounded and the best reaction they’ve ever had as well. So it was really cool to play these songs. They went okay when we played them in the first place, but we were a very small band. This was like breathing new life into our whole back catalogue, which is so fantastic. We expected an really awkward first hour of the set. It turned out not to be the case. It was fantastic.

Did you find that you played those old songs a lot better this time?
Yes. We’re probably better musicians now. And it’s one of those things where, when we wrote them, we didn’t know a lot about music as well, so there was harmonies and stuff on the guitars which literally were incorrect. We relearned them and while we didn’t re-write them, we altered some parts on the second guitar so that they instantly sounded a million times better.

If you ever get a chance, do you think there’s a possibility that you might re-record some of them again one day?
Maybe! I’m surprised to see how well they stacked up, to be honest. It was one of those things where we really had to pick which songs we wanted to play because a lot of them worked really well and others, we jammed on them and it was like, I can’t believe we wrote something this bad. There’s definitely some absolute garbage in that back catalogue but at the same time, there’s some that really wouldn’t be out of place on some of the records we’ve done since, I guess, after Killing With a Smile!

What was it like for you looking back over those 10 years? It really doesn’t seem like that long ago that I remember seeing you play in the middle of the afternoon at Metal for the Brain in 2005 and now you’re playing the biggest rooms in the country every time you go out.
It wasn’t that long ago. It doesn’t seem like that long ago for us, as well. It’s strange how much time flies, I guess. It’s not like we’ve had one big BOOM and all of a sudden we’re this big band. It’s been a steady rise over being in the band. Everything has happened in a way that kind of made sense. We just toured and the next time we toured we were a bit bigger, and the next time we toured we were a little bit bigger… it’s all just gone in a gradual curve. When you look back after ten years, when you’re doing the DVDs or something, or doing the book, looking back and going, ‘Holy fuck, how many people used to come to the shows? Things really have changed!’ Those are the reality checks you get, because otherwise it just seems like shows go from good to better to better again and suddenly you’re old and it’s like ‘Shit, shows are good! I can’t believe this one’s better!’ You can’t believe how much better it’s been than since we started.

So tell us a little about Ten Years of Parkway Drive. How much of a say did you have in what went into it?
It was probably the only release we had that was taken out of our hands so much in the sense that we didn’t know how to put a book together. That was the work of our friend Callum Preston who did the artwork for Atlas and a bunch of other stuff, and it was his idea to do a book in the first place. We had all the material, but we needed help to make a book. We gave him all the stuff and he basically showed us what was going to happen and we said, ‘That’s great’. Then when he showed us the complete vision, it was what was had envisioned times a thousand, which was really, really great. Especially as there’s so much content in there. Putting together 300 pages of something and making it so cohesive and making it look like someone’s scrappy photo album is really phenomenal. He did such a good job on it.

I talked to Ben (Gordon – drums) before you went out with BDO last year and we spoke a little about the ARIA Award you won. As a band that’s always worked independent of the industry and whose success still seems to be over-looked by it, did winning that come as any sort of validation for what you do?
Well it was nice, but it wasn’t something where we had a massive party. When we actually won it, we were in Germany and it was three in the morning and there was a call that said, ‘Here, you guys won’ and we went, ‘Yeah, cool’ and went back to sleep. It’s a cool thing to have and it’s something that I guess the people who voted have been taking notice of us and that’s fantastic, but to be honest, I’d rather do the shows we do and see people singing along and smiling and have that impact as opposed to having a fucking trophy sitting on my cabinet.

Parkway has just finished the 10th anniversary shows, and now you’re about to head out on the Warped Tour. Does it ever seem like you never get a break from the road?
The way we work these days is that we do a tour and then in between we spend about a month or at least the same amount of tour we spent on tour, off tour. That’s the way we try and do it nowadays. We’re in the lucky position where we can pick what we do and we don’t have to take everything that’s coming and advertise the band. We’re established enough that we pick what we want to do and that means we get up and play better and we’re more energised and we’re able to make the band work so much smoother, and that’s fantastic. When you look back on a year’s worth of work, you still seem to have done a helluva lot of shows, but luckily we’re not away for like six months at a time now.

What are the plans for another album? Obviously it’s only been a year since the last one, but what sort of plans do you have for a follow-up?
It’s gonna be a year, I think, before we record. But we definitely have eyes and ears on a new album, and we’ve been writing. We have a helluva lot of inspiration and a lot of drive for what we want to create and it’s really cool to be making new sounds as well. The idea has to always been to progress in some way, shape or form and we’re still open to that. There’s still things that we think the band hasn’t yet made that can be fresh but at the same time still be Parkway, so we’re looking at new things all the time. We’ll see how we go.

One thing I have noticed over the last couple of albums is the progression in your lyrics. There definitely seems to be a stronger environmental focus to your songs now.
It happened with the whole Atlas record, full stop. The record was written at a point in time and in an environment that was so vast. We wrote that literally around the world. So the issues that came out were big personally or big in that (worldwide) sense, environmental issues and political issues and stuff like that, so it is something that I care about. It depends what makes the cut lyrically. It depends on, at that point in time, what I felt needed to be said, and for the songs on Atlas, that’s the way it was. But a big part of all our experience for a long time has been socially, environmentally and politically conscious to some degree, especially growing up in a place like Byron with a history of protests. That’s just the way we think, so putting it into song is just natural. There’s never really a list of what makes it lyrically and what doesn’t, it’s just what happens to work at any given time.

Outside the band, are you much of an activist, or do you prefer to use the band as your way of getting your beliefs and feelings across?
I’m not the sort of person who actively protests anything, to be honest. And that’s not meaning to sound like I don’t give a fuck. We do have important causes. We went down to the Sea Shepherd ship and hung out with those guys when we were down in Melbourne last time and we have those causes that we do, I wouldn’t say champion, but we definitely support. When it comes to physical, actual protesting and stuff, we’re just not around. I have done in the past, but we’re just not around these days. We’re in the wonderful position where we can make as much of an impact doing what we do in the way we do it than we could waving placards somewhere. We definitely do believe in standing for something and there’s no point in writing bullshit that means nothing! You should write about something you care about.