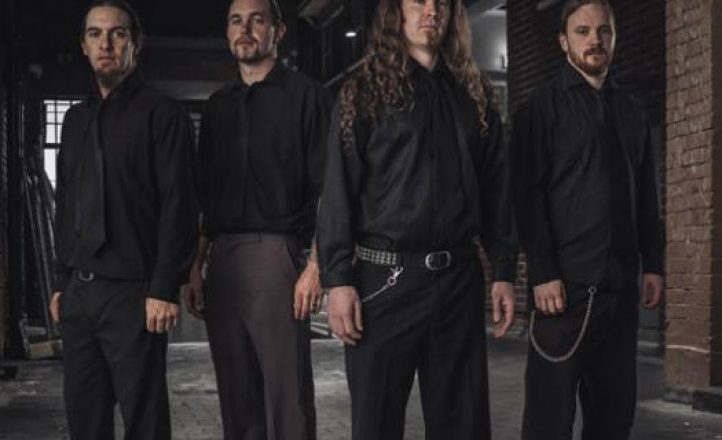 Hobart death metal veterans Psycroptic are currently on the road with Belgian monsters Aborted this month, and should have a new album out by the end of the year. With things getting hectic for the band again, we caught up with drummer Dave Haley.


Hey Dave. How are things shaping up for the next tour?
We had a big show in Tassie that we filmed for a DVD for our next disc, for our next album, so that was a good preparation for the tour we got coming up next week.

Aborted is a band that you’ve worked personally with before.
Yeah, I tracked their 2006 album album, Slaughter and Apparatus so we’ve been in touch for a long time and we’ve always promised to bring them back to Australia. They haven’t been for a long time, so we’re pretty stoked to have the guys back.

What’s happening with Psycroptic now – you’ve just mentioned that you filmed a bonus DVD. How far along is the album?
We’re about three quarters of the way through the album at the moment. I just got a message from the boys today saying they’ve just completed the bass tracking, so now we just have the rest of the vocals and the mixing and all that sort of stuff done. We’re hoping for an October release.

As usual it’s been a pretty busy time for you guys, but not as busy, perhaps, as the last few years.
Yeah we’ve had to restructure – and I use the term ‘restructure’ in the nicest possible way. Basically we do what we can to fit in with whatever everyone’s got going on in their lives. Jason’s got a couple of kids, everyone’s got houses and work and that sort of thing. Obviously we don’t make a living out of the band, it’s not a full-time thing for us, so we’re restricted to what we can do. We stay as active as we can to keep our heads above water, so to speak.

I guess you don’t want to be in the situation you were a few years ago where you had to tour without half the band. How do you get around times like that now?
If there’s a cool offer and all the boys are happy with it even if they all can’t do it, we’ll take it. I guess it’s not ideal for us – even though we put on the same show, it doesn’t feel right. We’re slowing down a bit now with touring because we’re at the end of the album cycle, but hopefully by the end of the year we can ramp it up a bit and get out there.

There always seems to be a new aspect with every new Psycroptic album. So are people going to be surprised by what we hear this time?
Yeah, I think so. We’ve always changed with every album, from the first to the last. So expect the unexpected. I’ve listened to the album – the progress thus far – on the weekend, and the main thing that’s different on this one is there’s a lot more vocal variations on this one and Jason’s going above and beyond with his parts. He’s still got a little more to do, but thus far it’s pretty crazy. We’re just trying to push all the new elements to add something new and fresh to our ears.

Are you holding your breath awaiting the inevitable backlash? People were upset that Joe put a bit of groove in last time and others weren’t pleased when Jason first joined the band because of the change in vocals. Are you prepared for what people are going to throw at you this time?
Always! People don’t like change. People are entitled to their own opinion. I’ve got my opinion, and that’s right, they’ve got their own opinion and that’s right! You don’t have to listen to it. I don’t care about the backlash. Sometimes when you read a review and it’s outright nasty, when you spend a year of hard work on something and somebody sums it up in one sentence, it’s a bit hard, but on the other hand people will give us some positive response. At the end of the day, we do what we want. We always do what we want, and people just have to accept that.

What’s the situation labelwise?
We’ve negotiated a few deals which we’ll announce in the coming months. At the moment we can’t say too much about it. But we’re pretty happy with what we’ve worked out for the album and it should mean very good distro and some very cool tours. That’s the plan with the new deal we’ve worked out, so we’ll have to wait and see.

I’ve spoken to you for every release so far. How have things changed for Psycroptic since those very early days? Is it still really difficult a) being a band from Australia and b) being a death metal band, to be taken serously?
Yes and no. Because we’ve been around this long and we’ve toured so much, people know that we’re serious about what we do, and while they may not understand it, there’s a little bit of respect we’ve been fortunate enough to get from people who realise we’ve put a lot of effort into it. Everyone in the band has made sacrifices both personally and financially to be in the band, and while I’m not saying that commands respect, we’ve been fortunate enough to gain respect from that side of things. Financially, yes, it’s extremely difficult being from Australia. If we want to tour Europe we need 10 grand before we can play a show. That’s pretty challenging. It’s kind of a level playing field when we tour internationally. We’re treated like any other band. We have to perform or people aren’t going to come back. The Australian, Tasmanian aspect might be a selling point or a gimmick to some people, we still have to perform and be as professional as we can be. So that’s a bit of a convoluted answer to your simple question!

Despite it being more popular than ever, wherever you are in the world metal is still marginalised. I guess you still have to do a lot of hard work, but have you found yourself scaling back on your own activities now?
No, no I still do whatever other projects I can. I just returned from a month long tour of Europe with Pestilence. I also play drums with them. I run a teaching studio in Melbourne – I teach drums as my day job. As for side hobbies-slash-job, I tour a few bands. I like to bring out a couple of bands each year that I wanna see and no one else is touring, just because I like touring and hanging out. I like to keep hectic, keep my schedule pretty full. Otherwise, I just don’t know what I want to do.

What was it like touring with Pestilence?
It was pretty cool. They come from a bit of a different generation, obviously. Very old school dudes. Personally, everyone in the band is really, really cool and in that regard it makes touring very very easy. I felt I had a lot to owe to the old school people in the band. There’s a legacy there so I made sure I was on the top of my game and play the songs as faithful to the original while still adding myself to them, because that’s why they hired me, for me particular style. So it was fun tour. It was 18 shows in 18 days. The guys can’t tour that much because of family and work commitments so it’s not a strenuous touring schedule at all. Hopefully I get to do some more stuff with them next year, but I’ll see how it goes. I felt very honoured and privileged to be asked.

For you it must be a continuous learning curve for you, to be invited to play with all these bands. A lot of them are different in style from what you are best noted for, so you must find yourself learning things all the time.
I can always learn how to be a better drummer. I still take lessons every couple of weeks with a teacher. There’s always something to learn. If I don’t know how to do something, I want to learn how to do it. Playing with other bands, jumping in the deep end, is the best way to do it. Highlighting your weaknesses is the frustrating part of it, you know, but you have to find your weaknesses and turn them into strengths.

What would you say to someone just starting out on the drums and what sort of advice would you give them?
First and foremost, never forget the reason you started doing it. Never forget how fun it was. That’s the main thing – keep it fun. Moving along to something more serious – never forget there’s a vast difference between actually playing and practising the drums. They’re two different things. One is frustrating but gets you better, and one is super fun, and that’s why we do it. They do go hand in hand, and a good drummer just keeps it positive and makes sure your mind is always open. You can learn from anyone. You can never have too much knowledge.

Brian is Loud‘s editor. He also maintains The Australian Metal Guide and hosts The Annex radio show Wednesday nights on 89.1fm in the Blue Mountains.