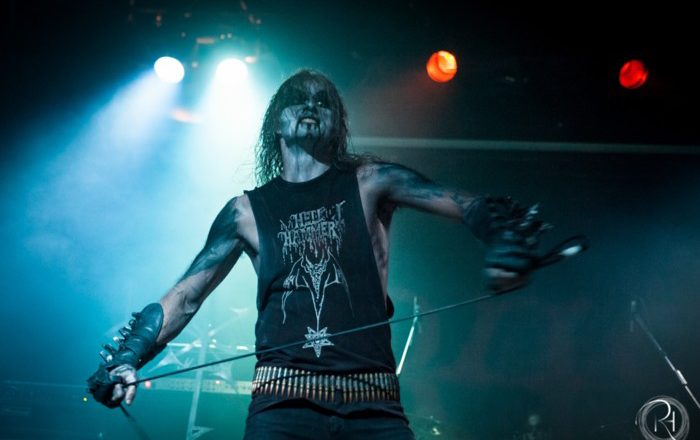 Norwegian black metal band 1349 – delightfully named after the year the Black Death encroached upon their country – promised a brutal collection of sounds. The collective live experience of the support bands also meant that there were no slouching efforts from any bands on tonight’s bill. It was not for the squeamish.

Kicking off proceedings for a night of blackened sonics and sinister vibes, local band Pestilential Shadows, from near Wollongong, brought as much atmospherel as could be crammed into a tight, thirty minute set. Whilst having been a staple of underground shows for over a decade, the line-up has stabilised in the last few years so that material from most recent release Ephemeral had a more cutting, well-rehearsed quality about it. The five piece utilised smoke effects, backlighting and a judicious use of black metal make up. Drummer Basilysk’s shimmering cymbal work added eeriness to the dirges and the double bass drum thump moved the riffs along. Some solo melodic guitar solos added flavour but the scooped, fast repetitive rhythms by guitarists Decay and Somnus together with the guttural growl of vocalist Balam and bassist Gaap consolidated the ongoing attack. A 30 minute set was a bit limited given long atmospheric nature of the tracks presented, but overall, it was pretty well done.

During the interval, before Tasmanian band Ruins delivered their set, a quick trip to the merch table revealed that 1349’s limited edition dappled red and black vinyl of Massive Cauldron of Chaos had completely sold out. Not long after that revelation, Ruins proceeded to hammer out a punishing 40 minute set, backlit with blue light and using album artwork banners for a more polished look. As the band includes half of Psycroptic by virtue of having Joe Haley on guitar and Dave Haley on drums, their live performance was guaranteed to be professionally delivered and flawlessly executed.

Be it slow grooves to impressive and super-fast percussive work, the time changes behind the driving rock gallop no doubt kept bassist Kai Summers on his toes. Alex Pope offered a brutal vocal delivery to enhance the atmosphere. As sounds of chains and screams plus samples from films such as The Exorcist ushered in various tracks, the four-piece invoked a death metal vibe with their cold sonic mix. Fast strummed guitar rhythms were spiced up with harmonic bursts and the use of upper strings ringing out. So anyone expecting just standard death metal was pleasantly surprised, leading to the usual throng of punters awaiting the international act to start wandering in sooner than usual.

The venue filled up as 1349’s set beckoned. The stark stage was enhanced with ritualistic silver symbols adorning the amplifiers. Following the ‘Inferno’ introduction, the menacing power of 1349 was promptly unleashed with hooded monk costume sporting five string bass Tor Risdal “Seidemann” Stavenes leading the charge on ‘I Am Abomination’. The four piece continued with a couple more tracks from the Hellfire album of 2005 allowing touring drummer Sondre Drangsland to wallop the life out of his bass drum pedals playing the challenging work of black metal legend Kjetil-Vidar Haraldstad aka Frost.

More relentless cymbal and snare rolls work was pounded out on material from most recent album Massive Cauldron of Chaos including ‘Exorcism’ which was introduced by formidable front man Olav “Ravn” Bergene crossing his arms across his chest as if ready for burial. However, some humour prevailed as touring guitarist Tony “Secthdamon” Ingibergsson managed to get his fanned long hair caught in his guitar headstock’s tuning pegs during songs such as on ‘Riders of the Apocalypse’ from the 2003 debut album Liberation and ‘Slaves’ from the latest album. Wrenching his hair out to continue windmilling, there was no stopping the band in full flight.

The speed metal rawness vibe even allowed room for a rare but brief virtuoso guitar solo which then led to a slower half time paced dirge rhythm before cymbals crashed and the blast beat attack resumed. Songs such as ‘Serpentine Sibilance’ from Revelations of the Black Flame and ‘Chasing Dragons’ from Beyond the Apocalypse offered more of these variations. Stage gear included arm bands, bullet belts, dirt paint smears and the odd inverted cross inference using arms at a song’s end. The stage was often red backlit which transitioned to stark white at end as ominous wind effects within Tunnel of Seth introduced ‘Atomic Chapel’ from Demonoir. The track simply gave the eardrums a solid beating through a generally clear PA mix.

1349 is unrelentingly fast and whilst it did seem disjointed in a live setting, the wonder of it not falling over in a screaming heap live revealed their impressive performance skills. A memorable experience to witness.