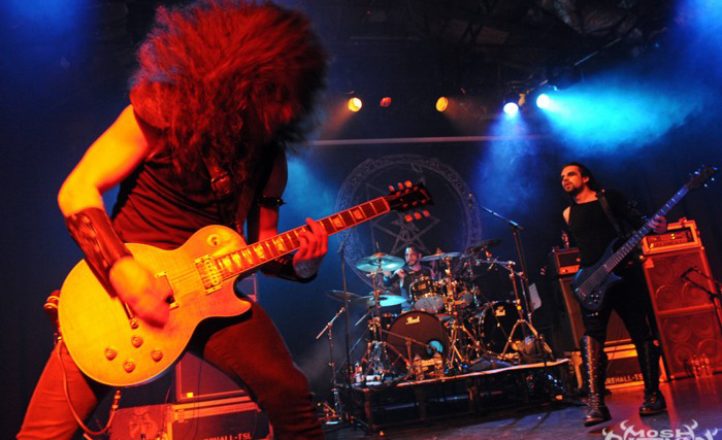 For some of us, the concept of occult metal doesn’t really extend past King Diamond, an appreciation of black metal and a smattering of H.P. Lovecraft novellas. For others, it is a gateway into a spiritual dimension where utterances are profound and imagery is all important. Each to their own but on arriving at the venue, which was also holding fort to alternative champions Sebadoh in the downstairs room (most under-promoted tour ever – Ed.) and a record fair to boot, to say the crowds were crossing paths with a level of curiousity seems understated.

Ambling upstairs to catch Innsmouth, their slightly Sabbath infused boogie and down tuned sludge oozed from the speakers with surprising sonic clarity. Out of the shadows, their vocalist warped over his vocals with venom. Ending with ‘Five Branches Against Doom’ from their new Consumed by the Elder Sign album barreled along nicely. Drummer Neil Dyer led the time changes as hair flew about. Nice work.

Soon enough, Denouncement Pyre from Melbourne walloped the stage in a welter of face paint, leathers, and massive nail adorned armbands. With a dual guitar attack of both right and left handed, the look was complete for stage side domination. Solos peeled off between snare blast beats and rhythmic walls of sonic hatred. The casual call for more drums undermined the evil intro voice about some temple to pass gateways to the other side. Yet, fronted by Decaylust from Nocturnal Graves, the blast beats, cold, calculating guitar, manic trade off guitar solos and guttural vocals were the overall set standouts.

Relentless and with their second full length album after ten years of carnage, they launched into ‘The Deceiver’. From then on, it was nothing short of pure black metal power and between songs noise included feedback howls wallowed beneath the colourful banter. ‘Circle of Serpents’ delved into something sinister amongst the groove and cymbal destruction. ‘Under the Aegis of Damnation’ jumped through tight rhythmic black metal power chord stabs with the drummer set to explode in a fit of pummeling rage. Thirty minutes of some pretty decent black metal. The effort they’d put in was undeniable.

Onto Portal from Brisbane; here is a unique musical appreciation if ever there was one. Front man, The Curator, is the overseer of this experience and the highlight throughout the set seems to be awaiting the Pumpkinhead or Nosferatu like claws to appear from his virtually motionless depths, highlighted by the backlit stage, as the incommensurately hooded one conducts the sonic wall. Imagine if TISM went up north, got into black metal and decided to be experimental. Take away the wit and social commentary and replace it with a monstrous blast of extreme music with minimal variation. Okay, each to their own and everyone loves an artistic vision but how far can this go realistically?

Somewhat odd and truly up there with patience-testing, the only thing resembling a thread of melodic interest is the occasional groove feel with admittedly impressive musicianship beneath the onslaught and some pretty well laid out drumming that cannot be faulted. Sorry, Portal are confronting to the point of being objectionable. Listing songs would be pointless as it is more a case of being artistic in a musical landscape – a solid infusion of fear. Fair enough, consider the job done then. Abrasive sounds between songs were the order of the day but bewildered looks on punters entering the venue said it all. Largely unintelligible, it was an art installation guilty of self indulgence. A mixed reaction.

Absu, on the other hand, promised something special as the drum sound check kicked in. The band from Dallas, Texas hit and for a sometimes blue and largely red backlit stage set, the leather clad and face-paint adorned three piece wasted no time in setting the venue climate into an extreme metal zone. Opening with ‘The Waters – The Denizens’, minds were given a new way to think about metal. Themes for this band include primordial habitats, occult gods, magick, mythology, ancient history scribes and repeated label-defying album titles in favour of historical cultures. Not your typical extreme metal and possibly something an historian might care to validate. Moving on, their sonic power is nothing short of a whipping for a three piece.

‘Night Fire Canonisation’ welcomed the first brief moment of screeching, reverb drenched chatter from drummer and co-vocalist Sir Proscriptor McGovern which also ushered in the unusual practice of silent pauses between song chunks as various technical stage adjustments were made. This happened regularly but was only noticeable given the full set being chock full of sound when things were running at full tilt. Within the next batch of songs, guitarist Vis Crom wasted no time in prowling his side of the stage to either keep incredibly fast right hand rhythms going without missing a beat or unleashing wailing scalar runs, as witnessed in the furious ’13 Globes’. He was a whirlwind of mad hair as he took to his Les Paul guitar with a certain level of controlled violence.

The vaguely amusingly introduced ‘Vorago’ had the raw style of Venom and Sodom in delivery without a hint of subtlety. Bassist Ezuzu, having drenched his hair in water for effect, played bass lines that oddly enough took on a level of technicality. This was mad music and almost came across as free jazz on speed. If Proscriptor wasn’t barking vocals, destroying drums and making bizarre throat ripping sounds on occasion, Ezuzu was trading vocals, adding a slightly different timbre to proceedings, yet no less aggressive. ‘Highland Tyrant Attack’ hammered through with a raw, gritty, uncompromisingly breakneck pace through out, as lyrics somehow shoehorned their way into the maelstrom.

The main set concluded with ‘Never Blow Out the Eastern Candle’, another track from In the Eyes of Ioldánach EP from the late 90’s. Thus, more brutality ensued. The encore of ‘Swords and Leather’ from The Third Storm of Cythraul album was introduced with a blackboard-scraping vocal screech and was then unloaded as an indiscreet thumping.

Absu’s seventy minute set was not just raw but visually entertaining. The drumming on display this evening was at a brilliantly technically proficient level that made up for any understandable stage presence limitations. Whilst Absu really delivered the goods, it has to be said that the support acts also gave the headliners a run for their money as far as variety and dynamics was concerned. Still, depending on your appreciation of Portal, Absu put on a far more worthwhile, fast and furious set.