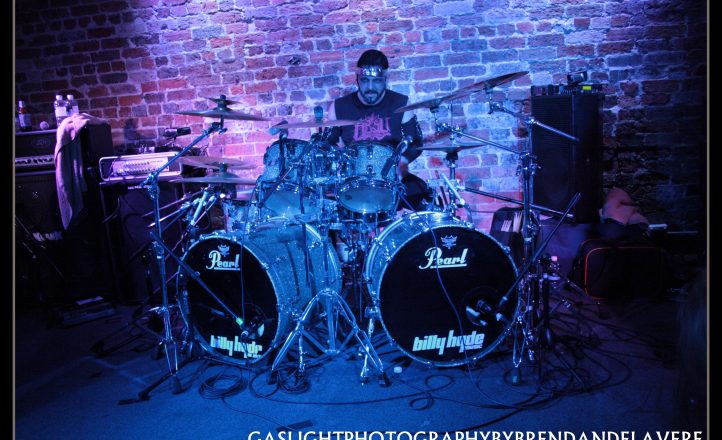 As the first gig of the year for this reviewer, and as this gig happened to be Texan occultists Absu, it was naturally fitting for there to be an unseasonable chill in the air on what was Friday the 13th: Black Friday.

Due to the early starting time, I unfortunately missed opening act Norse, though having witnessed them before I was assured their performance was tight. Following shortly after came Erebus Enthroned. Their grimy black metal stylings worked the small crowd with Nihilifer’s voice piercing the room. Their set showcased some of their darkest tracks taken from debut full length, Night’s Black Angel.

With the small room rapidly filling, Tasmanians Ruins took the stage with their frenzied whirlwind of black thrash. Dave Haley of Psycroptic was a powerhouse on drums, whilst Alex Pope’s harsh demeanour and vicious snarl had all eyes unblinking in disbelief. Functioning as a full band rather than a group of session musicians has seen Ruins finally come to full force, tearing up the stage in a whirlwind cacophony of sound.

The strange beast that is Portal has always walked the fine line between sheer madness and intricately artful. Clad in black cloaks whilst The Curator donned a rubber mask underneath a flowing black veil and elaborate headdress, the band created an overly disturbing atmosphere of deliberately murky and seemingly unrefined sound. The Curator commanded the stage with his squid-like hand, vacant stare and menacing, echoing growl as the sold out room stood transfixed. Opening with “Psychades” followed by the haunting “Sourlows”, they created new levels of unease through dissonant chord progressions and a pounding rhythm section courtesy of Ignis Fatuus and Aphotic Mote. Closing with the labyrinthine “Illoomorpheme” and claustrophobia-inducing “Curtain”, it is hard to comprehend or understand the scathing, twisting enigma that is Portal.

Having practised in the black arts of occult, Absu have been honing their craft for more than two decades now and with this, their first tour Down Under, they were certainly made to feel welcome. With an extensive back catalogue at their disposal, Absu showcased why they are one of the finest acts in American black metal. Tearing through tracks from their long awaited recent release Abzu, one fan took a flying leap off the stage during “Earth Ripper” as the crowd parted, subsequently leaving him red faced and sore. “Mananan”, “Night Fire Canonization” and the earth-trembling “Circles of the Oath” were all met with howling screams of approval and numerous death claws raised high.

Absu have been a revolving door of members, and this most recent incarnation has taken the concept of Sumerian mythology and created a bowel-wrenching force to behold. Whilst American black metal differs vastly from the ‘true’ black metal that started in the cold of northern Europe, this band of occultists can hold their own. The only qualms this reviewer had was the sparkly headband Proscriptor McGovern wore to attach his microphone, that served to distract from the image of darkness.

Closing with the brutal “Highland Tyrant Attacks”, the audience upped the ferocity, engaging in all manner of movement. For the first gig of the year, it is great to see that underground shows such as this are showing no signs of losing momentum amongst the considerable barrage of bands flooding our country.