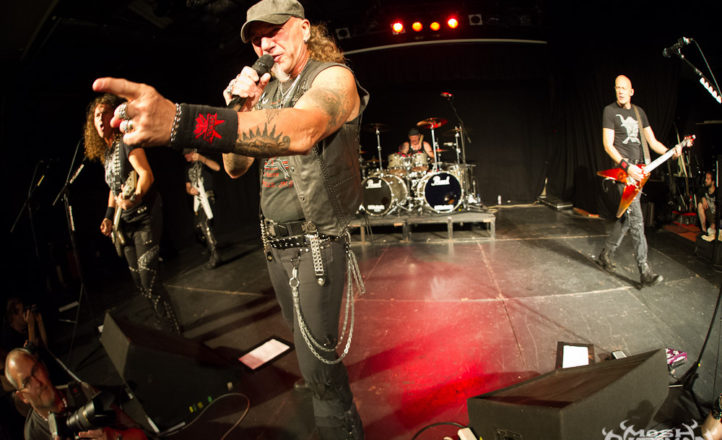 German heavy metal legends Accept never toured here in their heyday. Having reunited and cranked out some critically acclaimed albums since reunion it was a real treat to finally have them doing a quick run of the east coast in support of their latest Blind Rage album. As a stinking hot day in Sydney edged into evening, a sea of old school metallers descended upon nearby water holes on the way to the venue at the edge of Newtown. Upon arrival, it was a mix of younger generations combined with the older set reveling in a chance to sport some classic denim patches. However, the growing line to the merchandise sales area indicated that updating the metal apparel wardrobe was a priority for some.

Local band supports kicked off the night with Both Temtris and Darker Half doing the honours. First band Temtris opened with the songs ‘Captured’ and led by a leather pants and red corset sporting front woman Genevieve Rodda, they wasted no time in bringing the growing crowd to attention. The twin guitar attack of Llew Smith and Anthony Roberts allowed some sharing of solos and some decent, driving rhythms that included some seven string power. Even bassist Adam Wotherspoon, in a character building hat, charged away on a five string bass. Still, the humour award goes to Genevieve for having bright red pentagram artwork on each bum cheek of her black leather pants. Each to their own but she could still carry a tune with ease. Playing tracks from their latest Shallow Grave album, both ‘Silent Tears’ and ‘Darkness Lies’ were highlights.

Next up, Sydney four piece Darker Half, fresh from touring overseas, were in fine spirits offering up their power metal based thrash with plenty of banter to rev up the crowd. Front man and guitarist Vo Simpson appeared happy in his element running through limber solos and trotting out strong vocals in support of their recent album, Never Surrender. In the lead guitar duties, Jimmy Lardner-Brown of Killrazer provided some amazingly fast and dexterous fretwork to accompany the driving rhythms of jubilant bassist Simon Hamiliton and hard hitting drummer Dom Simpson. Both the title track and ‘Blinded by Darkness’ went over really well but Vo’s development as a front man really shone in ‘Heads Are Gonna Roll’ and ‘Stranger’. Closing their set with ‘Duality’, it is safe to say that Darker Half is already a band to watch and continue to improve.

As the PA pumped out numerous heavy metal classics such as Van Halen, the room filled up very nicely indeed, waiting patiently for the sound check of every item in their stage arsenal to be checked with German precision. A rack of very tasty flying V guitars hinted at some stunning guitar work to come and a double bass drum kit promised some heavy metal drumming power. The stage was well arranged with equipment concealed and a three microphone stands showing their backing vocal powers meant some huge choruses were to come.

Sure enough, albeit a bit later then expected, on walked Accept and the crowd went ballistic with gratitude. Guitarists Wolf Hoffmann and Herman Frank took up their sides of the stage with bassist Peter Baltes sharing some space with Herman’s area. Both had some cool looking flying V guitars but Wolf’s guitars were certainly eye catching. Drummer Stefan Schwarzmann sat down, grinned widely and on raced veteran vocalist Mark Tornillo, the band kicked into ‘Stampede’ from the latest album Blind Rage. Any fans not aware that Udo Dirkschneider was long gone from the ranks of Accept had forgotten this by the end of the first song as Tornillo’s vocal power that is reminiscent of Brian Johnson of AC/DC really suits the Accept sound perfectly.

Of the few songs performed from the incredibly strong album Stalingrad in tonight’s set, the title track and ‘Hellfire’ had incendiary lead guitar work form Hoffman hitting the centre stage area, dueling with the bassist and then both moving back to their spots as Tornillo burst through them to sing parts. A little choreographed maybe but it worked well. Even when they did some other traditional stage moves in sync with the music, the crowd was into it. The new album tracks dominated the set list of course but a solo highlight from Hoffman was heard in ‘200 Years’ showing his confidence in wielding his guitar like a weapon during solos. It really is something that has to be seen live. Add to the fact that he does it all with an infectious smile and absolute mastery of the instrument, it is not surprise that his playing often garnered most of the attention.

Having said that, Frank is no slouch and his solo in ‘Losers and Winners’ from their classic album Balls to the Wall demonstrated that with some snappy tapping runs, effortlessly done. Continuing with a couple more early songs Hoffman changed guitars over to a gun metal styled military artwork signature Framus guitar and subsequently let rip on some great riffs and solos. The old school metallers in the crowd were excited to hear a track from Accept’s 1981 album Breaker in the song ‘Starlight’. To then flow into several tracks from their last two albums just showed how strong their current material is and how well it holds up with their classics. In that context, the title track from the album Restless and Wild was trotted out with great success as was the much loved ‘Princess of the Dawn’, whereby the band’s songwriting skills were evident in delivering tight, punchy yet economically performed chord rhythms.

Some trade off soloing kicked in between Baltes and Hoffman during ‘No Shelter’ from the Blood of the Nations album. Similarly, they were some nice harmony guitar lines between Frank and Hoffman during the classic main set closing song of ‘Fast as a Shark’. It should be noted that Schwarzmann, the drummer, had been powering away for almost two hours straight like the drumming equivalent of an engine room, possibly slightly overshadowed by all of the great guitar soloing. His relentless pummeling of the kit was simply astonishing to witness and is another reason to definitely catch this band in a live setting.

Encore time rolled around with three songs and started with the title track from Metal Heart. During the solo section, Hoffman added a little classical themed interlude and had the crowd sing along to his guitar lines. It was pretty amazing to see and showed the depth of Wolf’s musical education and the crowd’s appreciation for his skills. Further to that, a tasty use of wah wah pedal during the solo to the anthem like ‘Teutonic Terror’ added some spice to an already great piece of German heavy metal. The full set naturally concluded with the all round classic tune of ‘Balls to the Wall’ which saw the twin guitar power in all it’s glory as the riff was hammered out in exacting unison followed by a roaring guitar solo. As the show ended with some brief wind-milling theatrics, it was clear that the crowd had lapped up the entire experience which was indeed something special.

Nothing from what might be deemed the leaner years of the band was played indicating they know what works and what the crowd wanted which is powerful heavy metal at its finest. Accept put on an absolute ripsnorter of a show that every respecting heavy metal fan should see at least once. Let’s hope they tour here again because it was a substantially worthwhile event from start to finish.