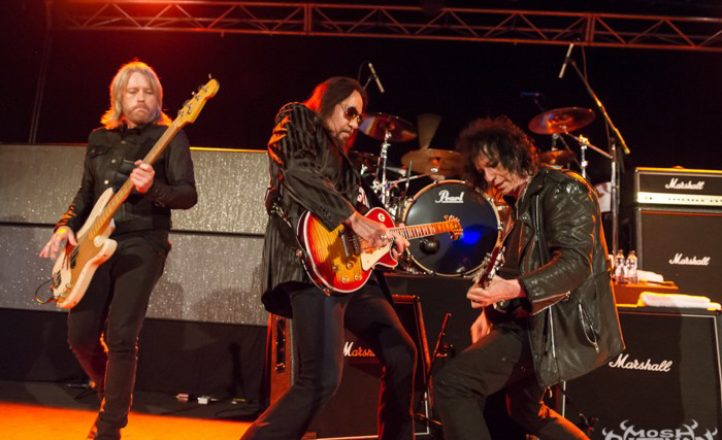 Kiss are simply astonishing in their marketing reach and use of brand flogging in any and every potential revenue stream possible. The history of the band line-up changes swirling around the co-founding hierarchy and their wayward lead guitarist Ace Frehley is well documented with melodrama from both sides so suffice it to say, the vast majority of punters present at tonight’s gig were in the pro Ace camp. The sense of solidarity to the underdog was less evident in their reaction to the support acts. It may well have been a good choice of darker and industrial style support acts for a more receptive, younger crowd but most of the fans tonight were not having a bar of anything outside of their accepted realm of rock entertainment or so it seemed.

Given the venue website did not advise on shifting opening bands around and time changes, it was a bummer to rock up after Witchgrinder had done their thing and trying to decipher reactions based on the stunned crowd. Mixing up stage times is nothing new but in this instance, this reviewer can only guess they did not gel with the older set in the audience more intent on hearing a new Whitesnake heir apparent. This sentiment was reinforced as the unsubtle gothic horror and glam rock stylings of second support band Graveyard Rockstars took to the stage. Regardless of the well placed and quite tightly played guitar solos on a cracking Les Paul guitar that Ace fans should have embraced, the image and overall lyrical approach of the band just did not set off the crowd or the band for that matter. It felt like a firecracker being let off in rainy conditions. To their credit, they soldiered on and won over a fair chunk of the younger set milling around closer to the front of stage. Strip back the image and take in the song structure, there is some credit due.

So, as the stage changeover whipped into place, the road crew were clearly initially struggling to abate some feedback squalls that the wireless gear presented against a fully stacked triple Marshall stack backline array whilst on the other side of stage, the bass gear was up and racing, promising some thumping bottom end. A standard four piece stage set up was already in place and tweaked pretty rapidly with the drum kit riser wedged up nicely in the stage centre.

Lights dimmed and on walked the band, with hired gun but no less invaluable Chris Wyse on bass guitar and long serving, reinvigorated, reunited rhythm guitarist Richie Scarlet, flanking either side of the stage. Regular Antipodean visitor and drummer Scot Coogan nestled into the drum stool and soon enough, the laconic, laid back, leather jacket and sunglasses wearing man of the moment aka Ace Frehley appeared to loud applause. Playing one of many stunning Gibson Les Paul guitars to be trotted out this evening and which partially hid a New York city celebratory, expletive covered t-shirt, the band launched into the classic track ‘Rocket Ride’ followed by the new tracks from the from latest album Space Invader in the single ‘Gimme A Feelin’’ and ‘Toys’ before powering into a three old classic tracks of the less often heard ‘Parasite’, the solo era ode to substance abuse in ‘Snowblind’ and the potential gig highlight of ‘Love Gun’.

That last track is one of Ace’s most notable and regularly cited guitar solos for overall influence. Seeing it done with a sense of abandon in a club show played by the man himself instead of on an arena stage with choreography and pyrotechnics galore showed what a succinctly well done track it is, offering the substance of Kiss material that the recent releases simply cannot match.

The crowd lapped up plenty of variety in the setlist as anything from the new album title track, the rarely heard ‘Breakout’ to an obscure Rolling Stones cover in ‘2000 Man’ and the big, early Kiss hit of ‘Strutter’ showed the huge range of material offered, all delivered with solid, crisp sonics and an enthused band.  Richie Scarlet was borderline unhinged in his stage movements whilst Ace was typically reserved by comparison, casually moving about the stage to offer different views to the fans positioned at their hard earned vantage points. Even if Ace resorted to the gimmicks of flashing lights on a sparkly guitar or the use of his signature smoking flash pots trick in the pickup cavities during a guitar solo, it was still Ace in a club and there was a genuine warmth in the way he played the songs, appearing to be both gracious and happy to be able to do so on his own terms. Bassist Chris Wyse managed a brief horror movie soundtrack solo spot for some relief and similarly, all members of the band took turns in vocals on mid set songs to overall good effect.

The solo or post Kiss songs continued to impress but it is fair to say that for many fans in the audience who, like this reviewer, saw Kiss at the Showground in 1980, the inclusion of Ace’s gem of a song, ‘Talk to Me’ from the otherwise quite fairly, less than critically praised Unmasked album was a show highlight. The hugely successful cover of ‘New York Groove’ had the crowd singing along as did the rough and ready ‘Shock Me’ which was another Ace era, Kiss classic that proved, yet again, how strong the songs were then and still are today. Closing the set with ‘Rip It Out’, the band took to the wings to await the encore.

Returning to knock the gig into Kiss fan bliss, Ace and cohorts dropped the double wallop of ‘Detroit Rock City’ and ‘Deuce’ to wrap up the show in fine form. Unless you were comatose, Ace’s latest show as part of the Space Invader tour surpassed the last tour here in support of the Anomaly album by being both well-rehearsed and more receptive to the audience requests.  The Spaceman invaded Australia in a good way.