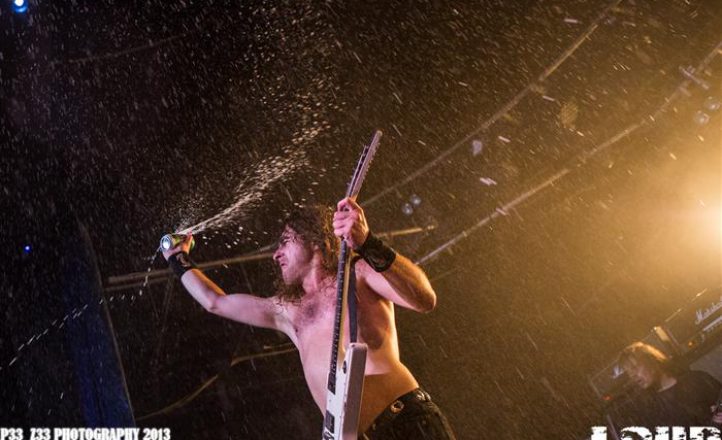 Wherever Airbourne go, a heavy concentration of rock and roll follows. They don’t just bring the music, Airbourne bring the atmosphere, the attitude, and a drive to party all night long with the cheapest wine and women around. With hundreds of fans before them, and 10,000 litres of booze behind them, Airbourne were set to bring the old school rocker back to The HiFi.

Before getting into the pub rock, opening act Palace of the King took the early punters on a trip back to the days of sleazy rock n roll. Back to a time when sex, cocaine and Mötley Crüe were synonymous with excess and real men wore spandex jumpsuits to work. They  brought the music without the shitty costumes, and an attitude that made the crowd want to live fast, party hard and headbang until they died.

Their country infused, keyboard heavy rock n roll dripped with all the hallmarks of the 80s, complete with plenty of vocal echo and a mighty, booming double kick. A set loaded with energy got the carefree crowd moving and shaking, as it conjured up an atmosphere akin to the mega stadium gigs of yesteryear.

The guitar and bass work was funky fresh and the vocals perfectly pitched in the upper register. But no member of Palace of the King could match the keyboard player for sheer enthusiasm. Although bound to a stool, the king of the keys spent more time headbanging than most death metal outfits but managed to play the entire show without missing a note. Everything right down to the banter was rehearsed to perfection, culminating in a set that was highly professional, and just downright fun.

Although firmly rooted in the past, the night wasn’t relying on the nostalgia factor. Still, there were probably more than a few people in the audience channelling a younger version of themselves. Beers were draining thick and fast as fans young and old eagerly awaited the arrival of Airbourne. When the time came, the band didn’t screw around.  Within sixty seconds of the opening track “Ready to Rock,” shirtless front man Joel O’Keeffe was pouring sweat as he whipped the room into a frenzied rock and roll orgy. Their high octane set kicked off with a bang, roaring straight into the red at 100 kilometres an hour where it stayed for the entire show.

The band refused to sit still, running around screaming at the crowd, constantly switching mics and making it clear that rock isn’t just about the music. It’s about putting on a show that makes professional athletes look like layabouts. But it just wasn’t an Airbourne show without a hint of nationalism, which Joel expressed in the only way he knew how: by breaking a can of VB open on his head and showering it over the crowd.

Everyone in the front rows became drenched in a cocktail of band sweat, beer and the intoxicating sense of extreme enjoyment that Airbourne  spread throughout all their shows. The stage was clearly too small for Joel, who ran through the centre of the room while playing a solo and climbed onto the bar to finish it. The audience parted like the Red Sea, allowing their rock god to pass through unharmed, although they weren’t above screaming a few “Onya mates!” and “You fucking rule!”

Particularly energetic fans caught the attention of the band, one in particular being the man who caught Joel’s VB can, much to the excitement of the front man. “You’re a good catch, you should play for Australia!” he screamed, before tearing through another epic solo.  Everything, including the crank siren solo that introduced “Live it Up”, was played with expert precision, even amidst all the bodily fluids. Joel’s vocals gave out after the first five songs, but no one seemed to mind, because like a true rock n roller, he kept the energy alive.

There were a few notable omissions from the set, and although people wore the appropriate clothes, there were a distinct lack of girls in black. At 75 mins the show felt a bit shorter than it could have been, but given the amount of work the band puts into their performance, it’s no surprise that they were exhausted after such a short time. There were no signs of disappointment, just the signs of a crowd that lived hard for a few hours before returning to their regular lives.

Airbourne are a bunch of showman, who take their love for rock n roll and express it in the raw. It made for a sincere performance filled with genuine excitement that encouraged the audience to go harder and faster without considering anything but the music on show. You get the sense that if Airbourne were in the crowd watching Airbourne, they’d be just as drunk and rowdy as anyone else in the room.

It was a 75 minute love letter to everything that Australian rock n roll stands for, wrapped up with Joel’s declaration that “as long as we’re here, and you’re here, rock and roll with never die!” He was right, and while some people may have died from alcohol poisoning that night, Airbourne showed that rock n roll isn’t just alive, it’s capable of delivering a full blown kick to the balls of every other genre.