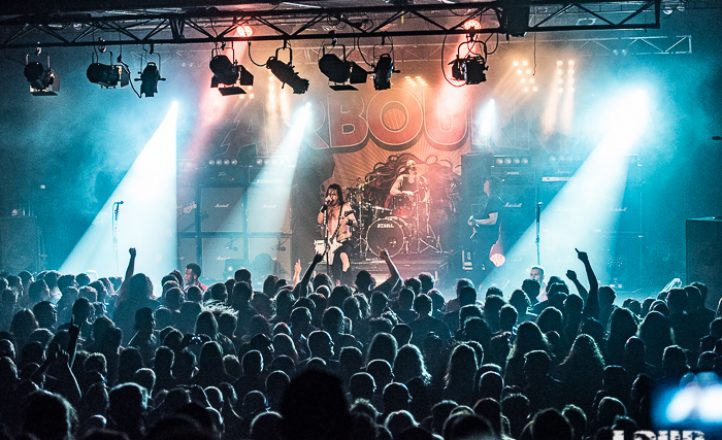 With even “rock” radio formatting starting to favour balladeers and soft-rocking tunes for the “new music” additions to their playlists, one could be mistaken in thinking that rock is falling further from fashion than ever. Those of us who worship at the altar of the riff don’t care much for fashion, though. Never have. We’re here for the rock, and tonight we all packed into the Metro to watch as one of our brightest burned with the power of a thousands suns.

It was a late start, so there was plenty of time for liberal dosages of alcoholic libation before The Ugly Kings sauntered on stage to warm up the crowd with great big slabs of 70s style stoner-sludge-psychedelia. Different enough from the headliners but in the same familiar territory, their huge-riffing heavy metal lumbering worked a treat on an audience that was stinging for some rock action.

A chant for the main act went up almost as soon as The Ugly Kings were finished but they weren’t about to come on just yet. Instead, the crowd was further revved up by a wealth of rock and metal classics that turned into a huge singalong, with one ex-Loud staffer conducting the audience from the photo pit.

And then it was on.

In front of their enormous backdrop, Airbourne blazed onto the stage in an explosion of lights and sound, an unstoppable weapon of pure rock n roll. Joel O’Keeffe was almost immediately drenched in sweat, howling into the mic and ripping into “Ready to Rock” with his guitar, bandmates locked in tight around him. The show had barely begun and he was already riding a roadie’s shoulders through the crowd, axe in one hand, beer in the other, then back on stage bellowing away without skipping a beat.

Airbourne were relentless, tearing out one ball-tearing rock monster after another with barely a pause for anything other than O’Keeffe busting open a beer with his head and spraying it around the room. The rest of the band were perfectly on the money, Justin Street, David Roads and Ryan O’Keeffe laying down the foundations for the older O’Keeffe’s shenanigans with faultless precision. It was a release of primal, urgent energy that was matched by the audience, a seething, sweaty, heaving mass of swirling bodies, air-punchers and crowd-surfers, screaming along to every one of the foursome’s ridiculously catchy choruses. Into the encore and there was still no one ready to go home as Joel climbed the stacks, split open more beer cans with his skull and the band thundered to a climax. This was simply one amazing rock and roll show. Even the most jaded casual fan who had strolled in off the street with no knowledge or expectation of Airbourne’s ferocious power would have been blown away by and thoroughly enjoyed what was happening in this room tonight: pure, raw, fuck-the-fashion rock n roll from one of the best live bands currently in circulation. It was a glorious thing to experience.

Ready to Rock
Too Much, Too Young, Too Fast
Chewin’ the Fat
The Rivalry
Girls in Black
It’s All for Rock n Roll
Down on You
Breakin’ Outta Hell
No Way but the Hard Way
Stand Up for Rock n Roll
—
Live it Up
Runnin’ Wild