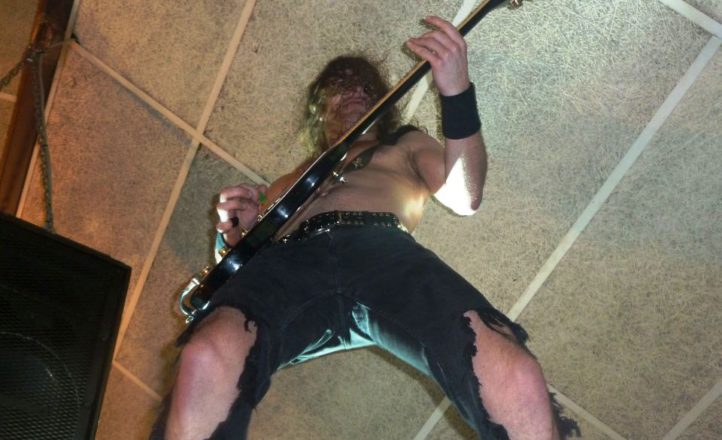 Live reviews that kick off with who the writer met and how he or she got to the show are usually lame. But allow me this one indulgence. Tonight I met two well-dressed Iranian students from the university which houses Bar On The Hill who had little idea what to expect from Airbourne. I also met a young fellow who, like me, had travelled up from Sydney for the show. His best mate is Malcolm Young’s son and, as things work among rock royalty, he therefore has a lifetime pass to any Airbourne show he cares to attend. By the end of the night, I kid you not, the Iranians were crying tears of joy. Young Brett, perhaps not so easily impressed, was dead centre, front row, utterly transfixed.

The one thing about rock shows in Australia is that the quality of supports is infinitely higher than anywhere else. Don’t bother showing up early to a gig in Hollywood or Helsinki – you’ll be disappointed. Here, you’re more likely to be pleasantly surprised and that was certainly the case with Canberra’s Tonk. The Richie Sambora-style voice synthesiser is clearly not dead! Tonk, a tough hard rock band with likeable hooks, use it to good effect in three or four songs. They almost sold me a CD but their material is a little uneven with three or four “filler”-type ditties detracting from an otherwise impressive set. When singer Jinks does a Joel O’Keeffe and climbs a speaker stack, his guitarist asks “Now, how are you gonna get down, you fat cunt?”

Speaking of weight (and I try not to, generally), Casanovas front man Tommy Boyce has lost a heap of it. He’s a stick figure – and does not look healthy at all. “Here’s one from our latest album – five years ago,” he says at one stage. The Casanovas were going to be Airbourne before there was Airbourne. They toured the UK, got airplay in the US and then – nothing. Veering away from the AC/DC riffage and into Cheap Trick-type territory between albums one and two, perhaps they made a tactical error. Or maybe Tommy just stopped eating, I dunno.  Tonight they’re great, if not as cocky as in their heyday. I picked up two titles from an apparently-imminent album – “The Most Hated Man in Melbourne” (and people wonder why I want to interview them!) and “Me Time” – and they are belters. We missed you guys, glad you’re back.

Insiders tell me Airbourne DO play bad shows. They’ve played two of them – ever. Certainly fans in Europe and parts of the US and Canada would climb over hot coals to see the Warrnambool quartet in such an intimate setting.

Let’s not be cute about it: in the view of this writer, Airbourne are the greatest live band on the face of this or any other planet. I am well into my third decade of going to gigs, and I can’t remember a more spectacular act ever. Full stop. Tonight they start a little slowly – the mix is a somewhat awry. Joel sings the second verse of “Born To Kill” as the first verse. But when they kick into gear – whoa! There are times watching Airbourne where you think the head banging and side-changing has become a little perfunctory – “must bang head twice between lyrics”. But not tonight. Tonight, for some reason, in front of a few hundred frozen Novocastrians, they MEAN it.

Joel is to be congratulated for mixing up his between song banter. At first, it didn’t extend much past “here’s one for ya” but this evening he even makes reference to retrenchments at BHP. Someone should tell Victorians it’s NewCAHstle though…

Airbourne is a band that is more than the sum of its parts – which is a rare thing. People who describe them as an “hilarious AC/DC tribute band” don’t get them, don’t get AC/DC and don’t get rock’n’roll. There’s a spirit there that comes from something less tangible than just the way they look or the songs they play. It’s inclusive, universal and (OK, I’ll say it) life-affirming. If rock’n’roll is a religion then you don’t need twelve disciples. These four do the job on their own. Believe me.

There are no new songs tonight. Unfortunately, there’s no “Steel Town” either. But this outstrips any show you could see anywhere. Airbourne’s aural assault is so gut-wrenchingly, spectacularly good that you don’t have to be Iranian to feel those tears of joy welling up in the corner of your eyes.