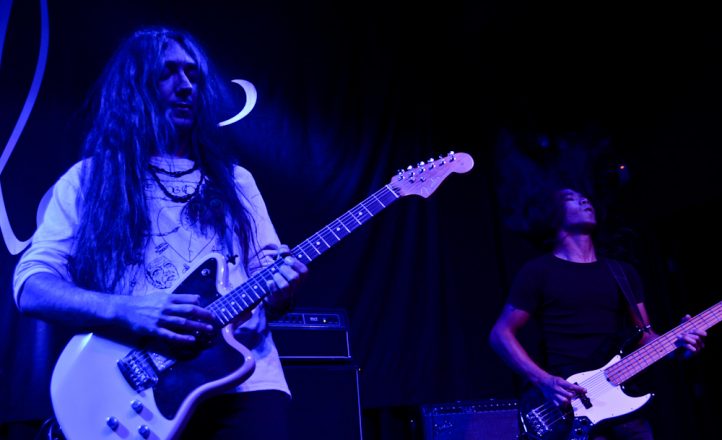 French Blackgaze pioneers Alcest returned to Australia for the first time in six years last week with an explosive show featuring amazing performances by Sydney post-rock act The Veil and Wollongong blackgaze project Germ. Credited for popularizing the blackgaze sound, a combination of black metal and shoegazing, Alcest started in 2007 as one of many projects of Neige and have since released 5 full length studio albums, including their latest effort; 2016’s Kodama.

I hadn’t heard of either of the opening bands. I have no idea why, because they were both killer. The Veil are far from a metal band – they’re more of a post-rock/gothic rock outfit – but their dark atmospheric sound is certainly suitable for an Alcest show. When they began the crowd was elsewhere, either at the merch tent, the bar or just standing around talking, but by the end of their first song they had begun to be drawn towards the stage. By the end of their set, the floor was almost full. They played with such an energy and stage presence that puts some big name bands to shame and I’m certain they won a few new fans. High praise for The Veil and I hope to see them again in the future.

Next up was Germ, a solo project from Tim Yatras. They had a fantastic sound that was reminiscent of Deafheaven, although the vocals were much stronger, and made use of 12 string guitars and a 5 string bass. Their songs were multilayered with a beautiful mix of soft atmospheric melodies and hard hitting black metal. As great as their musical performance was, their stage presence left a lot to be desired after The Veil. There was nowhere near as much energy visible on stage but the performance was good enough to let it slide and it felt like their set ended all too soon. I was just getting into it when they played their last song.

Now for the main event. This was Alcest’s first time in Sydney in six years, and man I hope it doesn’t take them six years to come back again. As good as The Veil was, Alcest were the best performance of the night. Niege is a great and humble performer who takes time out to interact and address the crowd. The band were on point. Alcest is the prime example of a band that sounds better live than they do on the album, and that’s saying a lot considering their studio recordings are fucking amazing.

A career spanning playlist showed off Neige’s brilliantly strong vocals and guitar playing. Newest album Kodama was featured, obviously, but they made sure to include much of their earlier stuff as well. Which means,yes, lots of growled, harsh vocals, and they made sure to come back for an encore, which is more than I can say about Neurosis earlier in the year at this same venue. Niege held the final note on the last song for about two minutes, quite an achievement. Later, he assured me that Alcest would be back Down Under very soon. Here’s hoping he keeps his word!