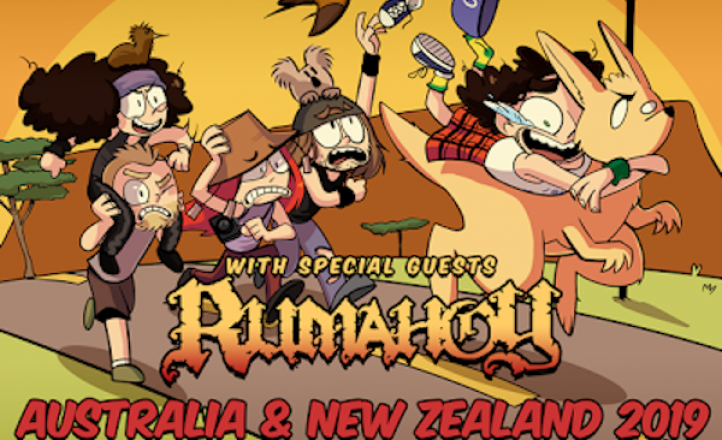 The number of attendees at such an obscure night of ‘pirate metal’ seemed like an unknown quantity before arriving at The Metro. Therefore it was a rewarding sight to see a monstrous line of devoted headbangers and swashbucklers strung out in blocks past the theatre itself, blocking the entrances and doorways of karaoke bars, restaurants and retail chains alike. As the rains came down on the trench coats of those decked out like extras from Pirates of yhe Caribbean, huddled with their novelty hats, swords and hooks in boisterous bunches under awnings and shopfronts, a heady atmosphere of anticipation built up to the opening of the doors at 8PM. We had experienced the storm, but the ale was yet to come. Jumping the immense queue to check my way through and enter upon a strange inner sanctum where rebellious geeks mingled with motley metalheads before the commencement of Christopher Bowes & His Plate of Beans, a merry, memorable and mischievous night was in store for most involved.

When the steamy haze of packed boozy bodies grew darker to the sounds of 50s rock ’n’ roll and the fitting theme of Mr Bean, a tracksuit wearing Bowes leaped upon stage to introduce the members of his techno-thrashing bean rap band in an epic, cinematic intro. With Bowes making sure to tip his first full can of SPC baked beans into a glass bowl at front of stage, upon a stool with its own personal microphone, he was joined by a beefy tuba player in hip-hop attire, a guitarist in a jump suit with a plush toy crab headpiece, and a punky looking drummer. As you can imagine, it was a total piss-take. With such song titles as ‘Killed To Death By Bugs’, ‘Transcendental Bean Exploration’ and the surprisingly catchy ‘Midnight Breakfast’, the quartet owned the stage as punters actually started moshing to the pounding techno backing tracks, fleshed out by heavy guitar and deep tuba. All the while, crowds kept streaming in with beer and Captain Morgans & Coke in hand, beverages appropriately being the drinks of choice for the night. Whilst being the singer/keytarist/founding member of Alestorm and the founding keyboardist of Gloryhammer, a goofy and defiant showman exhibiting brilliance at being totally ridiculous, Bowes actually proved himself as quite a capable rapper. The rest of the band joined in with displaying this comedic mood from the get-go, and a lighthearted attitude soon spread to most of the gig-hardened audience, as Bowes went on to empty another 1.5 cans of baked beans into his trusty bowl. I take care in stating that it was actually a bowl, and not a plate of beans, as name dictates. Sadly, a live performance of ‘Medical Emergency’ promised a tuba solo that didn’t seem to arrive, but this did little to dampen the high spirits at The Metro. As the crowd was left chanting ‘BEANS’ in repetition after the set, Bowes took his bowl backstage to do god knows what with, rubbing his belly with a hungry gleam in his eye.

Claiming to be from the distant seafaring land of Argentina but actually originating from Auchtermuchty, Scotland, 25kms from Alestorm’s hometown of Perth, Captain Yarrface (vocals), Bootsman Walktheplank (guitars), Cabinboy Treasurequest (bass) and Swashbuckling Pete (drums), also make the claim to be the ‘World’s Best True Scottish Pirate Metal Band’, as Rumahoy. This is not to be confused with Alestorm’s tag of the ‘World’s Second Best True Scottish Pirate Metal Band’. The first thing to notice about Rumahoy are their anonymous black balaclavas, the international look of the bank robber and signature clothing piece of groups like T.I.S.M and Pussy Riot. Oh how these mysterious men must have been sweating in these under the stage lights, not to mention the heat of their full pirate costumes.

Rumahoy played tracks from The Triumph of Piracy, released last year, and debuted tracks from their latest LP Time II: Party. With typically silly partying pirate lyrics, thrash influences, semi-breakdowns, and catchy gang choruses, Rumahoy went down a treat, encouraging the first crowdsurfer of the night, one of a dozen more, to be hoisted aloft to the waiting security guards. In the face of such an enthusiastic response, Captain Yarrface seemed amused and encouraged by the audience, exlaiming in rough, low tones that he’d “never seen a crowd circle pit to a ballad”, and that “the Sydney crowd was much better than Adelaide”, such statements resounding with cries and applause. “You want to hear a slow song? [audience – ‘NO’] Well fuck you, we’ll play one anyway!” During the performance of ‘Forest Party’, the rare occurrence of a ‘row pit’ was to be seen within the crowds closest to the stage, where, as the name suggests, punters seated on the floor rowed an invisible boat in rhythmic time. A refreshing break from the pirate theme occurred in ‘Cowboys of the Sea’, where Yarrface announced his secret desire to be a cowboy and adorned his balaclava with a little Western hat. The industrial EDM flavour of self-proclaimed ‘gay song’ ‘Pirateship’ began a chant of ‘Yo Ho Ho’, containing the lyric ‘Das Ist My Pirate Ship’. The revealing of Yarrface’s ‘treasure gun’, the stage prop accompanying a song of the same name, was in token to this “certified banger”, while tracks like ‘Live To Party’, ‘The Haitian Flag’ and ‘Welcome To The Sea’ led the unhinged crowd into crazed abandon.

Headliners Alestorm have always been a true enigma to the music industry; a group leading those to wonder how its members wound up in association with such a band and still persevere to preserve the group’s appeal on an international scale. The answer may simply be attributed to the sake of fun, or perhaps more insightfully, playing to the spirit of the eternal 16-year old, awash in a fantasy world of rum, beer, quests and mead, the thing a pirate needs. Before the group even came onstage, to lead us by the hand into their conceptual universe, a full-crowd Queen singalong to ‘We Will Rock You’, ‘We Are The Champions’ and ‘Bohemian Rhapsody’ was an exhilarating thing to behold, as anticipation grew to a fever pitch to the vocalisation of Brian May’s guitar solos. With Christopher Bowes being the sole remaining original member, the five-piece of keyboardist, keytarist, drummer, guitarist, and bassist strode onstage to an eruption of appreciation. The goal of the night? To party. Maintaining this sentiment by launching into hit song ‘Keelhauled’ from 2009’s Black Sails At Midnight, the second of the five studio albums, raining alcohol, frenzied head banging and a maelstrom of a mosh set the tone for their entire set. The adrenaline only dissipated temporarily amongst ragers like ‘Shipwrecked’ and ‘Magnetic North’ for such slower ballads as ‘Nancy The Tavern Wench’ and ‘The Sunken Norwegian’, (“a song about drinking beer and putting pizza up your butt”). I was impressed by Bowes’ ability to shred on the keytar while skulling a bottle of VB, while wearing a baseball cap, his Alestorm-branded kilt and a singlet reading ‘I Got Lost On The Gay Dolphin’. Quite a few songs after gesturing to tongue-kiss guitarist Máté Bodor in a rendition of the group’s latest festive single ‘Mexico’, a total of seven people graced the stage, comprised of one of Alestorm’s guitar techs, armed with a steel-string acoustic and a member from the first band of the night, for a cover of Taio Cruz’s ‘Hangover’. One song before, an impressively pitch-bent guitar and synchronised synth solo had been the highlight of No Grave’s ‘The Pegleg Potion’.

After Bowes enquired “Are there any alcoholics in the house tonight?”, Phil the tuba player from Christopher Bowes & His Plate Of Beans launched into a fast rap halfway through the song after piratically skolling a whole bottle of Jägermeister, with the audience joining in on the rap lyrics. He assured us that he was OK, as “people from Brisbane don’t throw up”. Bowes then declared that ‘we all fucking stank’. Confiding his provocative nature in being “pirates forever, from now till we die”, in subsequent track ‘Bar Ünd Imbiss’, Alestorm’s commonly repetitive lyrics and tempos started to wear thin. Such a novelty group requires you to maintain a very selective headspace, after all. Fortunately, proceedings were again spiced up with a performance of early-career-cut ‘Captain Morgan’s Revenge’ leading to a premature and actual wall of death at the command of Bowes, though he had told the crowd to “take off your clothes and have sex with each other” at the count of three. Appearing like the child of the giant inflatable rubber duck onstage, a smaller inflatable duck was thrown out into the crowd during the first encore track, simply entitled ‘Drink’, before the group ended the night with ‘Fucked With An Anchor’.

After ending their album tour at The Triffid in Brisbane, it’s unknown when the good ship Alestorm shall hit the shores of Terra Australis again, but when we do, our colony shall have its cannons ready. Such an infiltration of villainy shall only result in ringing ears, sticky feet and wet clothes once more.

Keelhauled
Alestorm
Magnetic North
Mexico
Over the Seas
The Sunken Norwegian
No Grave But the Sea
Nancy the Tavern Wench
Rumpelkombo
1741: The Battle of Cartagena
The Pegleg Potion
Hangover
Bar Ünd Imbiss
Captain Morgan’s Revenge
Shipwrecked
—
Drink
Wolves of the Sea
Fucked With an Anchor