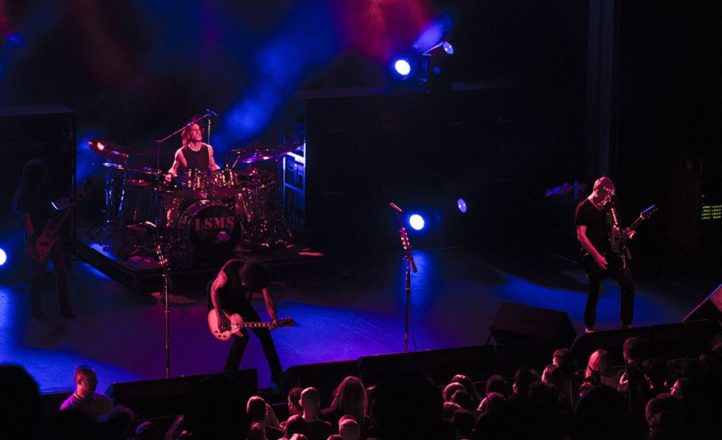 Opening tonight on this bill-to-kill-for was Seattle combo Walking Papers featuring the rhythm section of Duff McKagan and Barrett Martin, and mis-reading the start time I walked in at the tail-end of their set, immediately kicking myself to discover them playing some of the meanest heavy blues I’ve heard in a good donkey’s age. Their last song rolls out in a long, slow groove, frontman Jeff Angell mingles with the crowd, posing for photos and singing with a voice like a smooth malt whiskey. I really hope I get to see this band again.

The last time I saw Phil Anselmo on stage he was making a disgrace of himself, rambling like a drunken fool, abusing the crowd and sitting down on the stage steadfastly refusing to sing ‘Cemetery Gates’ with Pantera. There was nothing funny about him that night – he was simply a belligerent arsehole, a man close to his nadir who just seemed to no longer care. Almost thirteen years later and Anselmo is before me again, lucid, gregarious and – despite punching himself in the head several times throughout the set – amiable. He even cracks a grin a couple of times at the end as another young band gets up and starts jamming on ‘Bury Me in Smoke’ while Down hosts their own party on stage. Like him, the rest of Down are having a blast from the moment they hit the stage with ‘Lysergik Funeral Procession’. Pepper Keenan in particular seemed barely able to wipe the smile from his face – and who could blame him. Down was absolutely on fire as they ripped through ‘Lifer’, which the singer dedicated to fallen friends like Joey LaCaze, Layne Staley and, naturally, Dimebag, and then into ‘Hail the Leaf’, followed by the 70s acid rock flashback ‘Ghosts Along the Mississippi’. All the while, as the riffs descend like colossi and Jimmy Bower drives the engine-room effortlessly, Anselmo conducts and cajoles the crowd like the great frontman he truly is. As the last track winds down after a jam to end all jams, he leans out over the crowd with a final plea – “Let’s end this properly”, and gets the whole room to sing the final line of ‘Stairway to Heaven’.  It was going to take something special to match a performance like that, and that something special was Alice in Chains.

I’ve long regretted not getting along to see Alice in Chains when they first came here with Suicidal Tendencies twenty-plus years ago. As soon as the stage lights came up and the first bark of ‘Them Bones’ hit my ears, I was able to finally lay some of that remorse aside. Down had just bludgeoned the Enmore into submission, now it was time to envelope it in a moody, brooding aura engineered by a harrowing guitar tone and some of the finest vocal harmonies in rock. William DuVall’s vocal similarity to the late Layne Staley is haunting, but there are times here tonight where he surpasses him, hitting notes that brought audible cries of awe from the capacity crowd. Spellbound, the audience pumped the air to ‘Dam That River’ and swayed to the grind of ‘Man in the Box’, but there was something close to a revered hush followed by a welcoming roar when the gentle plod of ‘Rooster’ began – the entire building resonated as the fans joined in with the synchronised crooning of DuVall and Jerry Cantrell. The harmonies were sublime, the hooks inescapable, a band whose newer songs – ‘Hollow’, ‘Stone’ – fit right in with the old, where never a false move is made. ‘We Die Young’ has a stark poignancy given the fate of Staley and Mike Starr, their initials emblazoned on Sean Kinney’s kick drum and with ‘Down in a Hole’ Alice in Chains gave misery a beauty that few other acts can conjure. Unable to draw themselves away, the entire crowd is still in place when DuVall finally cries “If I would, could you?” with a 2,000 voices-strong accompaniment. As silence fell with the end of the set, Sydney was left with the sense that they had just witnessed something extraordinary, three near-perfect performances with a last that was truly superb.

Down:
Lysergik Funeral Procession
Lifer
Hail the Leaf
Ghosts Along the Mississippi
Witchtripper
Stone the Crow
Eyes of the South
Bury Me in Smoke

Alice in Chains:
Them Bones
Dam That River
Check My Brain
Man in the Box
Last of My Kind
Hollow
Rooster
No Excuses
We Die Young
Stone
Grind
Down in a Hole
—
Got Me Wrong
Again
Would?