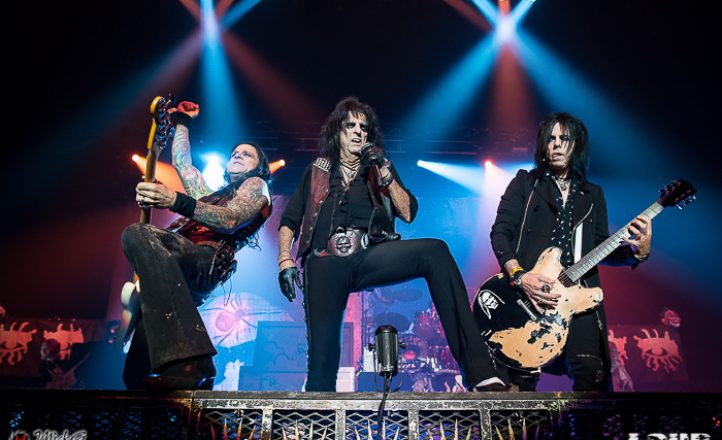 There is definitely something to be said for the youth-giving elixir that runs in the life blood and pulses through the heart of rock n roll. Although we have inevitably lost some along the way there are many survivors and there is no denying rock’s ability to make men, who should probably know better, run around like kids half their age and have a bloody great time doing so.

Tonight we are here to witness two of rock ‘n’ roll’s great survivors, one the original godfather of shock rock, the other a beloved ex-member of one of the defining acts of 70s American heavy rock. Both are well into the 5th decade of their illustrious careers, have bounced back from struggles with the lifestyle in the past and are now showing the new pretenders to the crown how it’s done.

The multi generational age spread of the audience is testament to the staying power of the artists taking the stage tonight, this really is the type of show any self respecting aging rocker should be taking their kids to and accordingly the Hordern Pavilion gets comfortably full as the night progresses.

Ace Frehley hits the stage at the decidedly unrock, family friendly time of 7.30pm which sees many running from the bar as ‘Parasite’ makes its powerful impact on an expectant crowd and it is immediately apparent we are set for a huge night with a couple of living legends.

‘Hard Times’ is a killer old track from Kiss’ Dynasty album as is ‘2000 Man’. As good as it is, a Stones cover is probably a strange choice where a solo classic like ‘Rock Soldiers’ would have been good to hear but this is reflective of the classic period of Ace’s career from which he has selected what is a stellar set. ‘Rip It Out’, a well aimed ‘Love Gun’ and the super punchy ‘Rocket Ride’ show a band in great form and the almost never played ‘Strange Ways’ from ‘74 is a huge treat for hardcore fans of the old band. Frehley ambles around the stage with his inimitable New York swagger and the hits keep coming – ‘Talk To Me’, ‘New York Groove’ and particularly ‘Shock Me’ see a happy and fit looking Ace playing better than we’ve heard him in years, smoking guitar and blazing fingers firmly in place and as the set reaches an upbeat end with the inclusion of two more solid gold Kiss classics, ‘Detroit Rock City’ and the inevitable ‘Deuce’ all are applauding a great performance from one of the nice guys of rock.

Part villain, part victim of evil intent the character of Alice Cooper is one of the great rock ‘n’ roll staples of the last 50 years. The twisted vaudevillian horror pantomime of the stage show combined with the power and drama of the heavy rocking tunes that accompany it is theatrical genius with a bloody, psycho undercurrent. What other rock show tortures and kills it’s hero several times in increasingly messy ways along with a soundtrack of 70’s classics, late 80’s trash and contemporary cuts.

Pyro blasts signal the entry of the caped master of ceremonies and we are invited to “spend an evening of death” with Cooper and his cast of shady characters.

‘Brutal Planet’ gets things underway and as we are presented with ’No More Mr. Nice Guy’, ‘Under My Wheels’ and ‘ Department Of Youth’ it is plainly clear we are in for a classic career spanning setlist. Much to Alice’s credit throughout his career he has fought and morphed through changing times to expand his audience, a fact reflected in the broad crowd demographic and as newer material like ‘Pain’ and ‘The World Needs Guts’ blend with 45 year old classics like ‘Billion Dollar Babies’; the years dissolve into the musical melting pot. A spectacular guitar solo from blonde bombshell Nita Strauss segues into crowd favourite, late 80’s mega hit ‘Poison’ as if to demonstrate that Alice has had more career highlights than most artists have had hot dinners and then it’s way back to ‘71 for the pulsating psychodrama of ‘Halo of Flies’, a very special treat indeed.
Live, Alice and his band has always maintained an edgy relevance and the guitar toting ghouls of the current incarnation look and play the part with great aplomb, add to this the characters of Nurse Rozetta and the 20 odd foot stomping giant that joins us for ‘Feed My Frankenstein’ and you’ve got one hell of a show.

‘Cold Ethyl’, ‘Only Women Bleed’ and sole track from the new album ‘Paranoiac Personality’ keep things pumping, it’s remarkable the youthful enthusiasm and energy Alice shows for the performance and this is matched by the dynamic thrust and potent presentation of his band.
‘Killer’, ‘I Love The Dead’, ‘I’m Eighteen’ and ‘School’s Out’ is the hit laden salvo that brings this incredible show to its dramatic conclusion.

It is endlessly commendable that a man about to turn 70, who will soon clock up 50 years on stage is still so obviously compelled by performing and playing out the many nightmares from the inside of his dark and playful alter ego. Alice has always been the king of shock rock, long may he reign !