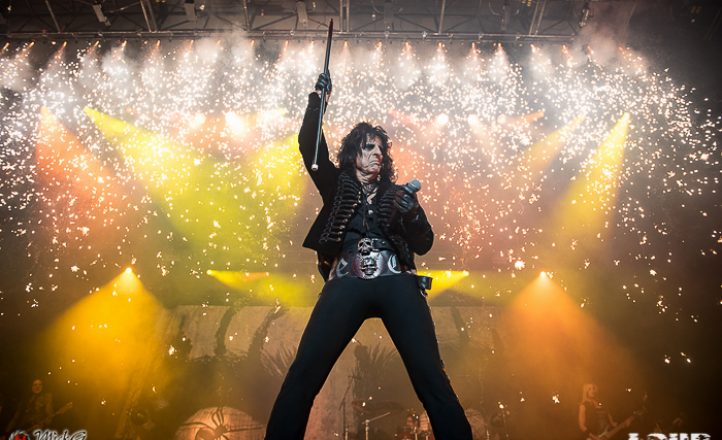 Legendary shock rocker pioneer Alice Cooper is familiar to Australian shores, having toured here often over his long and illustrious career. His latest jaunt celebrates the 40th anniversary of his first ever tour to Australia, back in 1977. Based on the people in attendance tonight, his appeal has crossed generations and there were numerous grandchildren of original fans being educated on exactly how to put on a huge spectacle of a show. Special guest on this tour is the ubiquitous and incredibly influential Ace Frehley, trotting out a re-energised selection of tracks from his Kiss days, primarily from the Seventies.

But before either took to the stage, Sutherland band Strangers had the unenviable task of warming up a crowd of Novocastrians intent on navigating beer and merchandise queues before settling into their seats in the venue that is probably in need of some aesthetic improvements. The band did well, offering a solid slice of rock with front man Ben Britton coaxing the crowd with NRL rivalry jibes whilst the rest of the band kicked through their songs with a strong delivery. Guitarist Mark Branes forgot to wear a shirt, but his flailing hair and aptitude for this low strung guitar allowed for some decent riffs and the odd brief solo to boot.

As more people filled in, the sounds of Frehley’s ‘Fractured Mirror’  chimed over the PA as a precursor to the powerful guitar rock to come. The band appeared with a wall of amps behind them and drummer Scot Coogan slightly further back, perched up high on a drum riser temporarily acquired from the Alice Cooper production team. Bassist Chris Wyse and highly animated rhythm guitarist Richie Scarlet were in sync with Coogan right from the opening track ‘Parasite’ whilst Frehley, in jeans, leather jacket and sunglasses, casually peeled off classic guitar licks from one of his pristine signature Gibson Les Paul guitars.

Covering a couple of Kiss’ Dynastyp-era tracks followed which enthused the diehards in the front as Ace began flinging plectrums into the first few rows.  Material from the self-titled solo album appeared but it was the next two tracks, ‘Love Gun’, sung by Coogan and ‘Rocket Ride’ from Alive II that got things moving along after Ace provided some quip-laden banter and his signature cackle of a laugh. He slashed chords, toggled at his pickup selector and played the economical but memorable solos with ease.

Wyse then contributed an unaccompanied bass solo that included the theme from Halloween, Black Sabbath’s ‘N.I.B.’ and plenty of speedy finger style virtuosity. As the band returned, he then provided the vocals for ‘Strange Ways’ before Ace trotted out the rare gem of ‘Talk to Me’ from the Unmasked era, which some fans may recall was when Kiss first toured Australia – this very track was played on a special Countdown appearance at the time. The nostalgia continued with ‘New York Groove’ played on a silver finished guitar complete with pulsing, travelling lights. ‘Shock Me’ was unleashed with raw finesse before Frehley took to the stage for a solo spot that naturally included the smoke bomb within his guitar.

Overall, the performance was very good but Frehley’s band thrives off crowd energy that was clearly present but seemed reserved on this occasion. Still, the Kiss fans loved it.

After a good half hour, the house lights dimmed, the crowd roared and the intro set the mood before the curtain came down to reveal the six piece band hammering out the atonal riff of the lyrically acerbic title track from Brutal Planet. As a rain of sparkling fireworks dropped down from the front of the rig, the black leather clad Alice Cooper was centrestage twirling a cane in his gloved hand when not singing into his microphone, neatly stored in a holster.

The three-punch of classics from early Cooper albums kicked up the pace. Of those tracks, ‘No More Mr. Nice Guy’ had added power from the rhythm section of tattooed eventually shirtless bassist Chuck Garric and the double-kick hammering drummer Glen Sobel. Similarly, ‘Under My Wheels’ and ‘Department of Youth’ increased the crowd’s enjoyment with Nita Strauss running around stage, spinning her guitar around while miraculously staying in time.

Themed backdrops changed between songs as the stage set production ran like a military operation; spooky back staircases, a huge drum riser strewn with dolls, snakes, chains and various horrific puppetry in morbid states of disrepair. Early eighties material got a rare glimpse this evening with ‘Pain’ from Flush the Fashion  including some nifty harmony guitar parts between Strauss and Ryan Roxie while Alice adorned a velvet and leather dark red coat. ‘Billion Dollar Babies’ showed how strong the vocal harmonies were from the musicians supporting Alice’s raspy yet still powerful voice.

It was nice that the set also included ‘The World Needs Guts’ from Constrictor. This underrated track also included a trade-off solo between Roxie and Strauss, segueing nicely into ‘Woman of Mass Distraction’ that ushered in Strauss’ quick fire unaccompanied guitar solo spot.

More stage production variety came as the band returned for ‘Feed My Frankenstein’. Sporting a bloodied lab coat, Alice was transformed into a lumbering ten foot Frankenstein’s monster in ‘Feed My Frankenstein’ which chased the others around the stage. ‘Only Women Bleed’ featured some dance moves from Cooper’s wife, Sheryl Goddard, in costume.

During ‘Ballad of Dwight Fry’ the show’s theatrical aspects reached their crescendo with that classic guillotine moment for Alice before re-appearing fully intact, tossing his decapitated head away to launch into I’m Eighteen’. The main set concluded with a mass of pyro and smoke effects all going off in quick succession, the crowd left in no doubt that they had witnessed an incredible performer in Alice Cooper and his band of consummate musicians.

The encore was inevitably ‘School’s Out’ and had the crowd all up on their feet, applauding and enjoying the moment as confetti filled balloons bounced around the venue.

Tonight’s show was an incredible performance, flawlessly performed by musicians with great ability and confidence in line with a sensational show production that enhanced the aspects of the songs. Today, Alice Cooper is still fighting fit and puts on a remarkable show as a clear testament to the wisdom of his lifestyle choices. He no longer shocks audiences but instead entertains brilliantly and with insightful humour within the lyrics for those willing to look further. Alice Cooper has almost certainly put together the sure winner for the tour of the year.