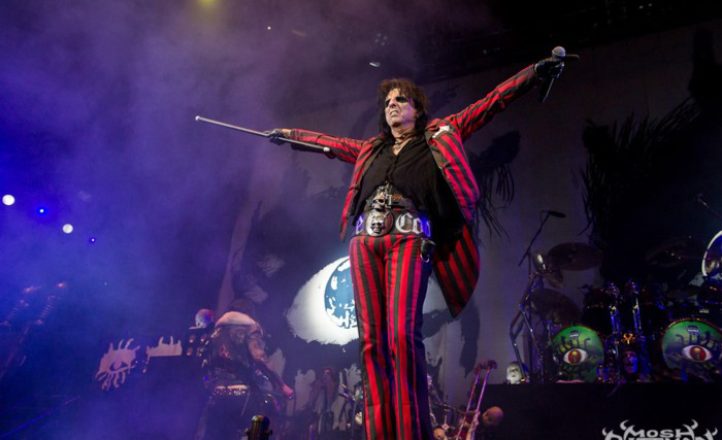 Vincent Furnier, aka original shock rocker Alice Cooper, was in town as indicated by face painted fans in faded tour shirts descending on the suburban sports venue. Opening for all of Alice’s tour was Sydney four piece Syndicate, who kicked things off with ‘Bring It On’, rocking away as their lead singer grappled with his scarf. The guitar playing was straight ahead commercial rock with quieter interludes and by the second song included a manic guitar solo crammed over a chorus and backing vocals before which the bass player was posing with over-the-instrument neck hand movements.

A bit more pop with a brief Joan Jett hit sing-along was followed by alleged road story confessionals in song and variations on Van Halen solos, power chord rhythms and a drum solo before the audience was asked if they were ready to rock. The cliché meter was twitching. But it was the acoustic backing tapes alongside chugging riffs for their Perth radio-supported single and the next song, ‘We All Die Young’ from the Rockstar movie that pushed it into the red. They finished with ‘Don’t Hate on Me’ which fortunately had a rockier riff, good wah pedal solo and some double bass drums so all up, decent and executed swiftly. They’re good at what they do.

The draped stage covering of the latest artwork including Alice and a rotting clawed hand reaching out amongst a misty graveyard hinted at the production as old tunes pumped out of the PA. The show commenced with a Vincent Price voiceover and the curtain fell away revealing a stage set including hanging effigies of Freddy Krueger and Michael Myers, a drum kit on an off centre riser, three guitarists and a bassist, some stage props for later and Alice on an elevated platform. To perform ‘Black Widow’ the man was elevated well over ten feet high in a coat that included six sewn on spider arms fired used sparks from his wrist. As stated, the band had three guitarists: Adelaide’s own prodigy Orianthi chewing gum with attitude, original Alice band member Steve Hunter and the edgier Tommy Henriksen. There was also Glenn Sobel on drums and tattooed long-serving Chuck Garric on bass guitar. Alice’s tower was spun around to descend a steep staircase and of course he sported black leather clothes, a cane and a holster for his microphone, showing a certain element of humour and nod to film appreciation.

The next five songs set the tone for covering classics and newer material without loss of pace proving strong songs are behind the military precision production. ‘Brutal Planet’ was downtuned riffage with Orianthi’s soloing well, as she did during ‘Billion Dollar Babies’ whilst Alice waved a sword with skewered fake cash around. We also got ‘Eighteen’ and ‘Under My Wheels’ before ‘No More Mr. Nice Guy’ had Alice at the front of the stage on a raised platform.

Orianthi’s shred guitar connections continued with the rare live airing of ‘Hey Stoopid’ that was a swarm of guitar great guests in the recorded form about twenty years ago. ‘Is it My Body’ had Alice wandering about with a large python, singing eerie lyrics until he walked off to leave harmony guitars to provide a break. It was bass and drums only for a solo with flipping drumstick twirls and cowbells before the guitars returned. So did Alice for new song ‘I’ll Bite Your Face Off’. It lost a bit of momentum with a mellower part and crowd participation hand claps and slightly odd as Alice wore a bloodied white shirt before the bombastic song ending. Then seeing him with maracas for ‘Muscle of Love’ was also somewhat strange. Still, that’s the thing about Alice; he has variety.

Orianthi took centre stage to let rip on a brief, flashy solo before launching into ‘Only Women Bleed’. The soft lighting allowed the man to dance with a stuffed doll. At the end, he embraced and kissed that doll just that little too long before throwing it around violently for the rather suspect ‘Cold Ethyl’, as guitarists traded solos.

The modus operandi was similar for ‘Feed My Frankenstein’, only it was now bloodied lab coats, gloves, high voltage props and a massive doll invading the stage during the solos. Very much like Maiden’s Eddie only stitched up, re-animated and with scraggy hair strands. Somehow this pantomime moment segued well into the rarely played ‘Clones’ that included a few silver face masks and robotic movements, mainly from Henriksen. As Alice copped moves too, Hunter used an interesting backwards sounding guitar effect during his solo.

‘Poison’ finally saw Alice in Trash-era leathers and gloves as Orianthi commanded guitar duties with aptitude and some stinging vibrato post solo. The harmonic riff of ‘Wicked Young Man’ continued the costumes with a bullwhip, commandant hat and another road crew extra playing a pesky photo journalist. Of course he became the recipient of a magically impaling microphone stand before Alice became a victim himself in the drum roll introduced show piece of the guillotine moment. It was all very silly and even funnier with the same old 80’s Alice head as a tacky prop. Good fun.

Garric led the band with ‘I Love the Dead’ sans Alice before he returned for ‘School’s Out’. As Orianthi and Hunter shared the classic riff, Alice stalked the stage in a studded lapels leather jacket, a top hat and black cane. Meanwhile balloons filled with confetti bounced around the venue, to be popped on return to the stage by a sword-wielding Cooper. A section of Pink Floyd’s ‘Another Brick in The Wall Pt.2’ was also added for extra dramatic effect.

The encore was naturally ‘Elected’ wherein Alice waved around an Aussie flag, wearing a yellow shirt and a top hat with some electioneering mockery to boot. The show finished to wild applause. It was a stripped back rock show by Cooper standards with some amusing theatrics and costume changes. The music is unquestionably good but for some, the appeal of the show is a question of taste and requires black humour to appreciate the social commentary, all without swearing, As crowds bundled out of the venue, it was clear that all agreed no one can do the vaudeville and shock rock combination better and it was legendary stuff to catch live. A lot of kids now got what their olds were on about.