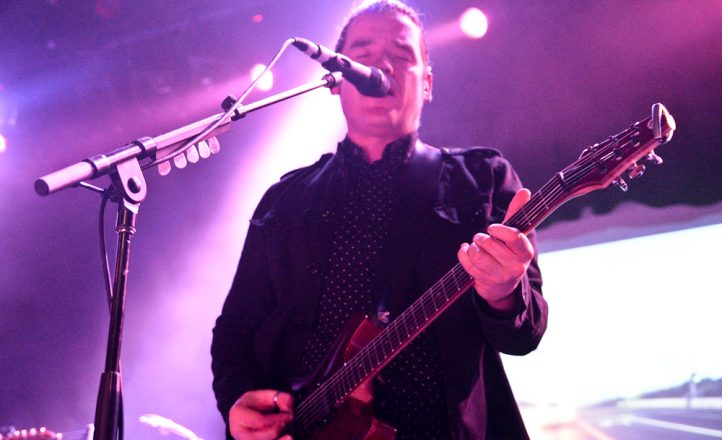 One of the impressive aspects of British band Anathema is that they never cease to be able to engage the audience and immerse them in their music. Tonight’s show was in support of their recent album The Optimist which, as time progresses, may well be deemed a masterpiece as it follows on, in part, from their ambitious but transitional 2001 release A Fine Day to Exit. With this being their third tour to Australia, the room was pretty well filled with eager fans keen to hear the new material in a live setting and they were indeed rewarded.

Sydneyband Meniscus were on stage first to get the growing crowd moving and they did so by letting the music just work. Appearing live as a three-piece, guitarist Daniel Oreskovic leaned into his riffs with initially jerky movements but settled down as he locked into the pace set by the rhythm section of bassist Alison Kerjean and drummer Alex O’Toolet, Kerjean’s finger style bass sound added a solid power to the material.

The three-piece really hit their stride when the rhythm section, in unison with delay effects-altered guitar work, stayed on track during tightly performed changes. Meniscus made a decent impression.

With the changeover underway, the venue continued to fill up to a comfortable but not sardines level. The set effectively started as ‘Love on a Real Train’ by Tangerine Dream played over the PA system. It was apt given Anathema’s show promised a visual accompaniment to the music by use of an efficiently sized projection screen at the rear of the stage. John Douglas was absent for family reasons but the whole stage set was impressively constructed, allowing the visuals to backlit most of the band during the set.

Vincent Cavanagh kicked off the show proper by waltzing on and launching into the trance like ‘San Francisco’, moving his body to beats as film of the abandoned car from the A Fine Day to Exit album art and water effects that morphed into driving around night lit streets began referencing the album’s thematic narrative thread. As visuals again changed to moving square shapes, the rest of the band took up their positions. It was then straight into ‘Can’t Let Go’, complete with a bouncing drum vibe and Vincent venturing to centre stage to sing and play guitar as Daniel Cavanagh offered up some high register lead parts.

‘Endless Ways’ continued the material from The Optimist but was a more emotive, atmospheric song with the sustained vocals of Lee Douglas continuing as the song became faster with a hypnotic delayed guitar figure while Vincent returned to his keyboards desk, backlit by the relevant albums’ simple but striking artwork. This was the way a lot of the songs worked tonight as time signatures differed but ran concurrently against reprised vocal phrases, swirling keyboards and guitar lines. The title track of The Optimist being another example as the considered delivery of vocals pushed against the keyboard sections. As red down lighting and blue hues enhanced the stage set, the song’s outro reached a crescendo with drums and bass adding depth against guitars and piano parts interlinked, both Jamie and Vincent becoming more animated.

A track from Distant Satellites was next with the percussive ‘The Lost Song, Part 3’, lead vocal duties traded between verse and chorus over the rhythm section, ebbing and flowing in intensity but retaining the song’s feel. We were then treated to several tracks from the masterful A Fine Day to Exit album. ‘Barriers’ was first with lyrics almost whispered in parts until Lee’s soaring vocals filled the room. Daniel’s full rhythm guitar sound plus his two solos in ‘Pressure’ were both haunting and subtly revealed his early metal guitar influences. The pace picked up with the loud, fast ‘Panic’ and the almost punk, hard rock edge pushed further by hard drumming and cymbal work.

‘A Simple Mistake’ offered up a set highlight as gentle, chorus effected guitar parts accompanied by Lee’s vocals changed dramatically, with Daniel’s unaccompanied riff figure coaxing metal guitar tones sounds as the band then returned to four piece mode with all three brothers locked in on the riff as the drumming contained driving snare hits. At this point, they were due for some Weather Systems material and did so with the song ‘The Beginning and the End’ but not before some banter from Vincent about going for a walk to see the Opera House and revealing his desire to, as he put it, ‘play there with a big, fuck off orchestra’. Of course, wild applause ensued.

As the song progressed, gold down lights enhanced the full bodied guitar solo tone from Daniel ending with some subtle finger style playing before the song completed with an unaccompanied keyboard figure. ‘Universal’ segued flawlessly into ‘Closer’ which acted as the sole representation of A Natural Disaster and was another show highlight that utilised apt visuals of an angular red robotic face for electronic sounding vocals.

At the close of the main set Daniel then remained on stage to perform his solo material song ‘The Exorcist’ from Monochrome as red lighting set the mood. Once the odd, loud talking recalcitrant audience member had been put in their place, a quiet, introspective piece blossomed with strong singing that was immensely captivating.

The band returned to the stage as a four piece initially for the encore, with only vocals, keyboards and flaming imagery for ‘Firelight’. It was swiftly followed by the electronica styled ‘Distant Satellites’ as that song’s album artwork backlit Lee who returned to the stage for the melody line.

Before ‘Springfield’, Vincent requested the house lights off so people could use their mobile phones to light the room. The piano introduction and vocals delivery showed again how good Anathema are at using spatial dynamics. Their mastery is in knowing when not to play even when the guitars and drums join in. The stage now blue for ‘Back to the Start’ which built up power slowly as instrumentation increased to concluded with an almost epic orchestral vibe.

Dan cheekily and authentically played the introduction to Metallica’s ‘One’ ahead of ‘Untouchable, Part 1’ from Weather Systems. Musical arrangements were deftly executed and the down lighting flashed alternate colours once the full band was in flight at the peak of the chorus sections. Naturally, ‘Untouchable, Part 2’ followed with Daniel playing the introductory keyboards part and soon enough, as Lee and Vincent traded vocals, the audience sang along. The sensational encore finished and the band were met with huge applause. Anathema had played a huge 135 minute set that was thoroughly entertaining from start to finish. As far as this reviewer is concerned, they performed the show of the year and did so by a country mile.