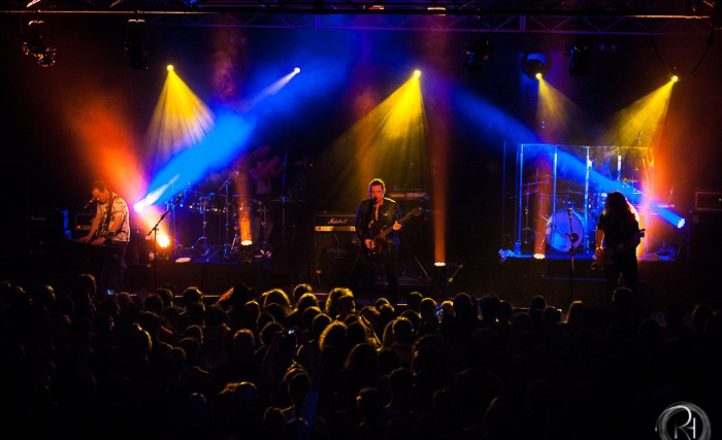 It’s been two decades in the making, but the Metro was finally hosting the progressive rock chimera that is Anathema and judging by the line of people still trying to get inside forty minutes after the doors opened there were plenty who were taking the long-awaited opportunity to catch them.

Local prog exponents Anubis were already well underway by the time I entered the building this evening, their membership spread out across the entire front of the Metro stage. Guitarist Doug Skene could not have asked for a better birthday present as the crowd gave a warm reception to his band’s expansive progressive rock, a style that touches base with elements of Pink Floyd and Rush – rambling but cohesive tunes with extensive instrumental breaks shared around the various band members. In light of what was to come from the headliners, Anubis was a perfect fit for the evening and no doubt came away from the Metro with a hefty share of new fans.

Anathema’s first ever visit to these shores was going to be a polarising affair for fans who wanted to see them but prefer their doom metal days because there was to be little of that on offer tonight. For those expecting a display of some of the best progressive rock being made today, however, there would be no disappointment. Slowly filling the stage as Pink Floyd’s robotic ‘A New Machine’ played across the PA, Anathema began with Weather Systems’ paired opening statements, ‘Untouchable Pts. 1 and 2’ and the near-capacity crowd feel into a state of revered awe as the band brought together deep harmonies, lush textures and a keen sense of showmanship to the evening. The first half of the set was dedicated to the more recent elaborate romances of the past three albums, with Vincent and Danny Cavanagh developing an instant rapport with the audience through subtle jokes and pop culture references. It was a relationship constantly nurtured throughout the performance, turning the house lights on, encouraging the fans to light up the room using only their phone screens; Vincent even spent the majority of one song perched on the crush barrier.

With ‘Deep’ Anathema rolled out the darker, heavier side of their character, with ‘The Storm Before the Calm’ continuing the omnious tone before the A Natural Disaster tracks evoked a trance-like state, a highlight coming with Lee Douglas’ vocal on that album’s title cut. The encore was heralded by an acoustic reading of ‘Are You There?’ and the haunting melancholia of ‘One Last Goodbye’ was a transcendent moment of the evening, perfectly capturing the dark emotion and majesty of Anathema. It took them twenty years to bring it here, but this evening Anathema more than made up for it with sheer brilliance.

Anathema
Deep
The Storm Before the Calm
Universal
Closer
A Natural Disaster
Distant Satellites
A Simple Mistake
–
Are You There?
Parisenne Moonlight
One Last Goodbye
Fragile Dreams