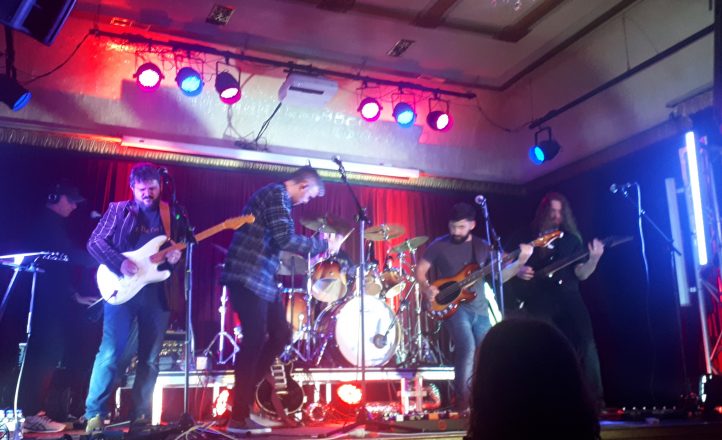 Sydney prog unit Anubis returned to live performance tonight after a 14 month absence from the stage. The occasion was the filming of their most recent album in its entirety, and the location was Katoomba’s glorious Baroque Room with its high stage, elaborate ceilings and chandeliers – almost a perfect setting for a band such as this.

A small and intimate crowd watched from candlelit tables as the band worked through last year’s Homeless in full as part one of a two-part set. Anubis plays an accessible style of prog that doesn’t get bogged down in overt complexities, one that concentrates on the art of the song, soaring melodies and rich textures.

With little in the way of chitchat, Anubis played through the album almost seamlessly, showing off an array of effortless musical chops and moments of flair from loud crashing drums to ringing bass lines and fluid guitar solos from Doug Skene and Dean Bennison, who also dropped in a few touches from a pedal steel guitar. As the first set wound down, a guest singer Jane up to duet with vocalist Robbie Moulding on Gone and, after a moment to find her range, helped round out a strongly confident performance.

Re-entering after a brief intermission, that confidence took a blow as Anubis learned the hard way why it’s sometimes not a good idea to over-rely on technology. Early into a set of older selections from their catalogue and the band’s laptop crashed, taking their backing tracks, samples, clicks and who knows what else with it, the breezy facade crumbling for a few minutes as various members scrambled to get the ship back on course. While a couple of them seemed rankled by the frustration, drummer Steve Eaton cracked wise and Skene threatened to break into Wonderwall on the big acoustic guitar he now had.

As it turned out, the second half of the performance was as marked with that type of technical glitch as the first half had been faultless. Anubis rode it out, nonetheless, as a band with six albums behind them should, keeping it together and recovering as they guided the audience through an overview of their career. While not exactly going off without a hitch, Anubis poured all 15 years of experience and mountains of talent into their showing tonight – but they might want to think about a computer upgrade!