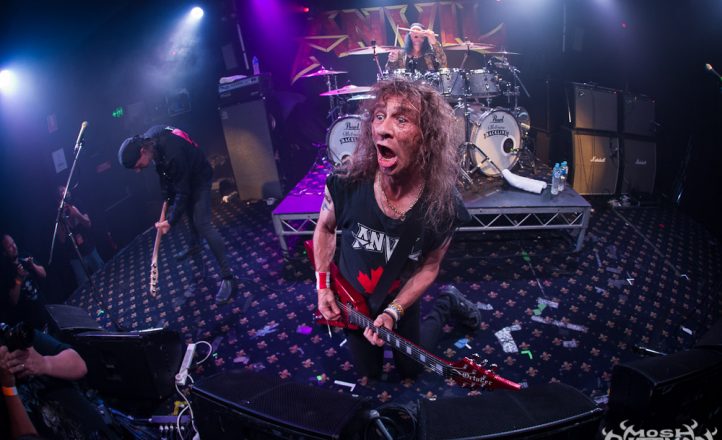 Canadian metalheads Anvil were substantially influential to many up and coming metal bands in the early 80’s. Sadly, whilst their output renamed fairly consistent, their profile started to wane as they found themselves being usurped by their contemporaries. Front man and guitarist Steve ‘Lips’ Kudlow and drummer Robb Reiner soldiered on through a variety of hurdles as their life long pact between the two tested their mettle, for want of a better pun, as documented in the raw and brutally honest documentary Anvil! The Story Of Anvil that explored the band’s career trajectory. That generated so much interest that subsequent tours yanked them from impending obscurity as the two continued on with a similarly minded bass player in the ranks and smashed out a prolific recorded output to where they now reportedly having just wrapped up their seventeenth album. To be frank, Anvil are an acquired taste lyrically and musically yet a loyal following still exists as evidenced by room filling up nicely this evening.

Having sadly missed the set of Tensions Arise due to various Friday night commute delays partially thanks to some protests going on somewhere this reviewer cannot report much about their sartorial elegance with a white wash stage clothing onslaught. Still, it was good to make it to the venue in time to catch Wollongong five piece thrashers Metreya with new front man Dave Tinelt. The lead guitar work of Adam Grozdanic was fast and varied whilst Dieter Jabs delivered some very Exodus-styled rhythms as bassist Sean Veale and snare smashing drummer Sean Clifford keep the rhythm section whipping along at a breakneck, thrashing pace. It was everything a metal fan would expect; loud flying V guitars, street clothes of sleeveless denim and bandanas plus head-banging styles of delivery that any Slayer, early Metallica or Kreator purist would enjoy. Songs such as ‘War Era’ and the set closing title track from the Machines of War EP were delivered at a blistering pace and with brutal precision. Tinelt really had some great stage presence this evening and enhanced Metreya’s fine thrashing form.

Next up, Western Sydney four piece Hazmat delivered a tight set that of more traditional metal didn’t cut corners whilst delivering a half hour support slot. Front man and guitarist Jay summoned his best James Hetfield approach with conviction and riffed away at speed in unison with guitarist Andrew ‘Duck’ Howard. Drummer Stu might have been on the stage corner but his drumming was heavy yet brisk, bolstering the twin guitar attack. There wasn’t too much banter just songs from their two solo albums, trotted out offering up a variety of styles such as groove metal, thrash metal to harmony sections, quick guitar solos and the odd punk metal chorus for good measure. Songs such as ‘Ragged Bloody Heroes’, ‘The Judge’, ‘Dodger (New Murder)’ were played with enthusiasm. Set closer ‘Burden of Proof’ had some harmony elements but largely pummeled and ended their set suitably with a quick thumping chord.

So, the legend of Anvil dropped on the punters and they clearly felt it was worth the wait as the basics of heavy metal were about to hammer them. The crowd included diehard thrashers with back patches and studs. They filled into the venue, having quenched their thirst and looked on expectedly at the Anvil backdrop which was simply the band name in red with a gold outline. Kudlow leapt into the crowd with his guitar and that set the tone for the night. Opening with instrumental ‘March of the Crabs’, Kudlow riffed and soloed as Reiner’s drums filled the room with solid bass backing from Chris Robertson before the front man returned to the stage.

‘666’ from Metal on Metal ushered in Kudlow’s almost Rob Halford-esque warble, and keen eyes would have seen head-scarf wearing Reiner’s jazz styled approach despite the hard hitting on his large, double bass drum equipped kit. Solos were tight and the bass groove was clear, Robertson was grinning from ear to ear and it was a facial expression that was featured largely throughout the set. As the song finished, Kudlow commented about the rarity of playing the same place they did four years ago on the exact same date [although it was actually around three years ago and in Newcastle on that date] and then stated that ‘Metal knows no age’ before launching into the very Motörhead sounding, straight ahead rock of ‘Oooh Baby’ from Hard ‘n’ Heavy. Delving into more recent material, ‘Badass Rock ‘n’ Roll’ was predictably simplistic and repetitive but allowed for some crowd handclapping interaction.

The three piece hit their stride with ‘On Fire’ which provided some fast double kick bass drumming used to full effect over a simple riff with elements of bombast. It was followed by ‘This Is Thirteen’ which allowed Kudlow to discuss the film and an anecdote about meeting Ozzy Osbourne at a magazine awards night where the latter professed an influence.

It certainly had a good guitar solo that built to a climax with an eastern feel and a smattering of reverb effects. Of course, another track from Metal on Metal was due and was dutifully served up with the amusing ‘Mothra’ which provided fast groove. A couple of tracks from Anvil is Anvil bookended the show. ‘Daggers and Rum’ didn’t extend overly past the concept of the song title with a hearty selection of pirate based ‘yo, ho, hos’ mentions of scurvy and an ensuing rowdy pit. But it was a somewhat plodding song saved only by the quick yet bluesy and expressive soloing from Kudlow.

Reiner’s drum solo was immersed within ‘Swing Thing’. It was quite amazing to watch especially given their vintage and his jazz styled wrist action that most metal players are not schooled in. Be it hi-hat to relentless bass drumming, just about every technique was covered. The pop punk urgency of ‘Die for a Lie’ followed as an anti-indoctrination mantra with plenty of guitar and drum parts executed well underneath the verse vocal lines.

Finally, the title track from Metal on Metal was introduced with some genuine thanks from Kudlow announcing it as an adopted anthem for the faithful metal head. It was a classic, economical song that had both the band and crowd joining together to sing the melody line before the inevitable conclusion full of outro guitar solos and rock poses that were gleefully replicated without a hint of irony by the happy crowd.

It was a smart calculation to end the set with a well-known cover song, especially if some punters only wanted to hear a few classic songs. Then, with a rapid outro solo and a solid snare thump the show was done and dusted leaving many a metaller pleased to have finally seen Anvil live.  Admittedly the band omitted about twenty years of material from the mid-eighties onwards to around 2004 but Anvil still delivered what their fan base insists they play live whilst convincingly infusing their strongest newer material with confidence. It was a fun night, pure and simple.