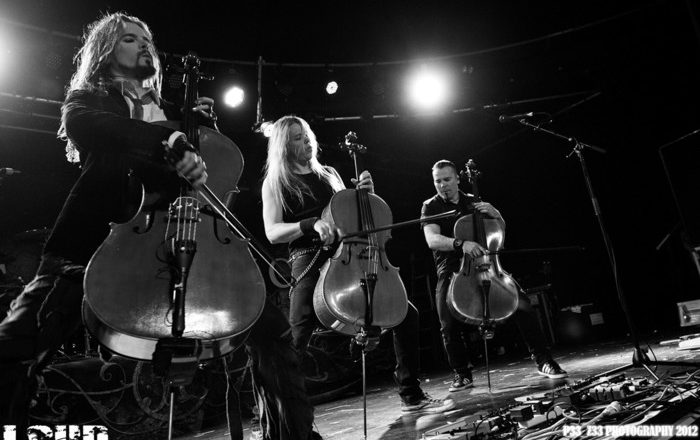 Apocalyptica were about to play for the very first time in Sydney, and the excitement was palpable. The venue was near-full well before the support, Rise of Avernus, took the stage. If there is one thing I have learned, it’s that venues tend to pack out closer to the time the headlining act is about to go on, so for this many people to be there this early, it was pure dedication.

I had never heard of Rise of Avernus until tonight, and I don’t think a better band could have been chosen to support Apocalyptica. This five-piece may hail from Sydney, but they have Norwegian and Swedish doom metal written all over them. The mix of clean female vocals by Catherine Guirguis with the guttural vocals from bass player Daniel Warrington left me thinking of Tristania. Rise of Avernus took the punters at the HiFi on an ethereal musical journey full of doom groove, head banging metal, and beautifully orchestrated atmospheric pieces. No fault to the band whatsoever, but the thing that put me off was the sound. I can’t remember this venue having such unbalanced sound before. It just seemed off. At times Guirguis’s voice was lost among the pounding of Andrew Craig’s drums, while Ben Vanvollenhoven and Matthew Bell’s guitars faded in and out of audibility. That aside , Rise of Avernus put on a great show of atmospheric doom that this reviewer would be happy to see more of – but with better sound.

Australia has waited a long time for Finnish cello-rockers Apocalyptica to grace our shores, and as more and more people filed into this venue that just didn’t seem big enough, it was hard to keep the excitement at bay. Opening with “On the Rooftop with Quasimodo” there was enthusiasm aplenty, and then a kind of stunned silence – that didn’t last very long. When I interviewed drummer Mikko Siren, he said that “when [Apocalytpica] go to a new place… during the first three songs you only see open mouths,” and that is what happened in Sydney. While everyone knew the music and had surely watched plenty of live videos on YouTube, or enjoyed The Life Burns Tour DVD, seeing them up close and personal is something else altogether.

Since the first record, a lot of people simply saw these guys as a gimmick. If there were any members in the audience who still thought that way, they surely left with a new opinion. This would have to be one of the most entertaining metal shows I have ever been to. Not just because of the novelty and unique fact that they are playing metal on cellos, but because Apocalyptica know how to put on a show.

Joining them to perform a few of the vocal tracks, Tipe Johnson brought fan favourites “End of Me”, “I’m not Jesus” and “I Don’t Care” to life. The problems with the sound wasn’t exactly rectified, and his vocals tended to wash out in “End of Me”. It was no surprise that Metallica songs would litter the set – it’s where they started after all. “One”, “Nothing Else Matters”, “Enter Sandman” and “Seek and Destroy” were all played to much fanfare, as the crowd became the vocalists to the music provided by Apocalyptica.

Eicca Toppinen, Perttu Kivilaakso and Paavo Lotjonen have great stage presence, not only making the crowd feel involved, but through the level of playfulness they displayed. These guys may be classically trained cellists, but they run around the stage, instruments hoisted above their heads, slapping each other’s legs with their bows as one plays a solo, or as Perttu preferred, to sit at the edge of the stage and wait patiently for Paavo, Eicca and Mikko to finish. It was all good fun, entertaining with their antics as they mesmerised with their talent.

As one would expect, there were moments that brought the tempo down as they performed their slower, beautiful pieces. Such a time came when Perttu took the stage solo to perform “Psalm 1.” Perhaps the excitement was just too much for some to bare, because while this required nothing more than to listen and be captivated by pure beauty, some thought it necessary to talk all the way through, yell out senselessly or clap along to a beat that wasn’t there. It was a shame, but seeing Apocalyptica go from pure metal, to such a soft piece, and then back again, was simply enthralling.

Playing a solid two hour set, Apocalyptica treated Sydney to four encores, but even that didn’t seem enough. After almost two decades, they finally made it to Australia and after the reaction from Sydney, you can be sure we’ll be seeing them again before another twenty years passes.

On the Rooftop With Quasimodo
2010
Grace
Master of Puppets
Not Strong Enough
End of Me
I’m Not Jesus
Quutamo
Psalm 1
Sacra
Nothing Else Matters
Last Hope
Life Burns!
Seek and Destroy
Inquisition Symphony
—
At the Gates of Manala
I Don’t Care
Enter Sandman
Hall of the Mountain King