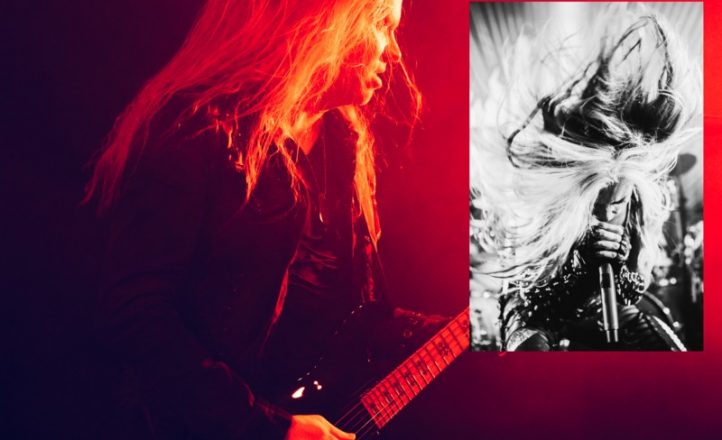 There’s a very real kinetic force that emanates from the collective energy of an excited, expectant and obviously ready metal crowd. Tonight the Manning Bar is literally fizzing with a visceral anticipation as a packed and heaving assembly of the faithful await the return of Arch Enemy.

It’s been six long years since the band last graced our fair shores, this tour marks the first time they’ve been here for shows fronted by uber-vixen​ vocalist Alissa White-Gluz and following the release of another couple of super solid slices of modern melodic death metal with her at the vocal helm they are a band on a steep arc of ascent.

One of the leading lights spawned from the incredibly fertile ground that was the 90’s Swedish Metal scene, they infuse their death metal roots with an intrinsic melodic sensibility that has seen them become one of the more forceful and interesting acts on the contemporary metal scene.

New album Will To Power has seen them continue their strident forward momentum and reinforced the reputation that has captured a large, rabid following and tonight the masses are out in force for a night of celebration.

Quality support tonight comes in the form of Potion – these Sydney psychedelic doom mongers kick things off, their expansive dirge is huge, their sludgefest is rooted in 70s mossy fuzz, lives somewhere between Sabbath, Electric Wizard and Cathedral and is a killer start to proceedings, and We May Fall – local post-hardcore heroes with an impressive handle on chunky riffs, screaming angst and blasting beats.

But tonight is a sellout for the main event of course and things crank up several gears as Arch Enemy thrust onto the stage and lift off with the thunderous aural attack of ‘The World Is Yours’. Double kick pummel, shreddy fretwork and bouncing war cry is what we have come to expect from this outfit, is why this place is packed to the gills and precisely what is delivered as the familiar riffs and sing along hooks of ‘Ravenous’ and ‘Stolen Life’ fill the room there is an inescapable buzz that has possessed the entire audience.

From the drums up this is a seamlessly powerful display, monstrous bassist Sharlee is locked into the percussive gymnastics of Daniel Erlandsson and allows guitarists Mike Amott and Jeff Loomis free reign to sprinkle fiery barbs of melodic riffage over the shred worshipping crowd. My god those guitars, two of the best guitar players in modern metal in one band, no problem ! Blistering at every turn, this is a fucking exhilarating guitar display of great lineage that pays reverence to some of six strings greats. Amott with his tasteful Schenker-ish Euro stylings and Loomis with his blinding technical savvy play off each other to thrilling effect as they hurtle into ‘War Eternal’ and the pounding ‘My Apocalypse’.

The bloodletting triplet of ‘Blood in the Water’, ‘Blood on Your Hands’ and ‘Blood-Stained Cross’ fly by claiming victims at every twist and turn.

Amott takes centre stage to reinforce the shed fest with instrumental showcase ‘Intermezzo Liberte’ and ‘Dead Eyes See No Future’ shakes us into more new material with ‘The Eagle Flies Alone’ and ‘Reason to Believe’. ‘As Pages Burn’ is a fiery belter and we blast back in time to ‘01 and the Wages of Sin album for ‘Dead Bury Their Dead’. The abrasive riffs and deathly growls of their death metal roots combined with an undeniable melodic and hooky sensibility is the essential element that has propelled these guys ahead of their contemporaries and sees them at the very head of today’s modern metal pack.

‘We Will Rise’ provides the perfect stomping end to the main set as the room again erupts in appreciation and the crowd is clearly floored by the musical dexterity and sophisticated presentation of this unit.

A quick breath and they bound back onstage for the encore, ‘Avalanche’ has the earth moving mountainous riffs we expect from these guys and leads into some stunning solo work from the axe of Loomis, Amott joining in for the lyrical instrumental showcase of ‘Snow Bound’ before they smash us into submission with a particularly savage ‘Nemesis’ with its crowd friendly “all for one” chanting refrain and then finally all the way back to their 96 debut with the chugging shreddy crescendo that is ‘Fields Of Desolation’.

The packed Manning Bar is a picture of pure metallic satisfaction, fists raised, hair flying and smiling sweaty faces, everyone hoping but knowing it will not take another six years to get this band back here again.