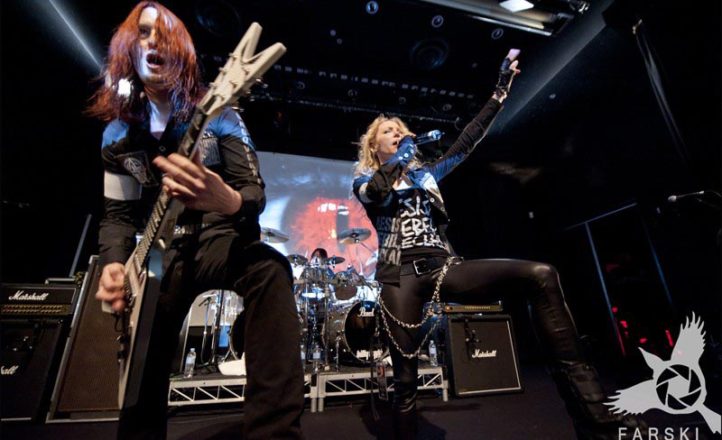 I didn’t get to see Arch Enemy until 2009 when they played to a packed UNSW Roundhouse. When I stepped into the Manning Bar Monday night, I was constantly comparing it to the bigger venue I saw them play last time. The first thing I noticed was the size of the stage. I knew it was small, but with Daniel Erlandsson’s drum kit set up ready, along with gear and amps it was barely big enough for the support bands. It was refreshing to see Arch Enemy have two Sydney bands as support. The smaller venue and local acts made the whole night feel like an intimate show, nothing like the cold distance stadium-sized concerts can emanate. No matter where you stood, you were up close and personal with the band, an experience many probably wouldn’t have expected at this stage of Arch Enemy’s career.

Despite the inability to move and use the stage to their advantage, Datura Curse played a killer set for the early punters. Early in the set, vocalist Sean announced they were just excited to be opening for one of their idols, and that excitement shone through. They played a short set, which was fairly disappointing. I would have liked to hear more from these guys. An early time slot, crowded stage and short allocation didn’t stop them from giving it their all, and playing like veterans of the biz.

It didn’t take long for the Manning Bar to fill out, and when As Silence Breaks took the stage bodies were everywhere, almost making it impossible to get to the bar or toilets. The band had one goal in mind: get everyone ready for Arch Enemy. How did they do that? By playing some of the most brutal metal I’ve heard from a Sydney band. They are no strangers to the stage – having been a part of the Taste of Chaos Tour twice and supporting others like Darkest Hour and Carnifex. Vocalist Sam Rilatt took much of his performance off stage into the crowd to the enjoyment of fans in the front row. As Silence Breaks definitely did their job, with a circle pit forming early in their set and remaining to the very last song.

As good as the supports were, when the lights dimmed and the intro track from Khaos Legions played accompanied by a video montage the little venue that could had a full house of roaring, moshing metalheads on its hands.

I had my doubts about how “the new guy” Nick Cordle could handle Chris Amotts’ amazing guitar work. To be honest, I was a little disappointed to not be seeing Chris with the band again; yet while brother Michael took the lead on almost all solos – where Chris would have in the past – Cordle never had that new guy feel about him, and he played Chris’ work as if it were his own. Any fears of the sound changing or chemistry being wrong on stage dispelled as quickly as it came.
The intimate feel of the venue must have been felt on stage, as Angela Gossow shared tales of despair and why she had stepped up as manager and agent, and how they thought they were going to die on a flooded and freezing plane to Australia. They seemed genuinely happy to be still alive and able to play for the “rebellious” Australian audience. A projector screen played movies and artwork to accompany each song, along with the lyrics to choruses so everyone could sing along. It was a little distracting at times trying to see what was playing on the screen – particularly the imagery used during “We Will Rise” and “Ravenous” – yet also wanting to watch the band. With two hours though, there was plenty of time to watch both and not miss a thing.

One of the best things about an Arch Enemy show are the instrumentals and extended drum solos. There aren’t many bands that can get away with giving their drummer ten more minutes of stage time to himself, or have their guitarists come out and play slower instrumental tracks – especially a death metal band, no matter how melodic. Arch Enemy is one that can, and everyone was begging for it. Never short of praise for their audience, the crowd was never shy to show its admiration. Even when Amott experienced a strange feedback issue during “Snowbound”, there were no heckles or taunts – there were cheers and support. This might have been a death metal gig, but it was more akin to a death metal love in. And easily one of the best shows of 2012 so far.