Home > Live Reviews > At the Drive-In 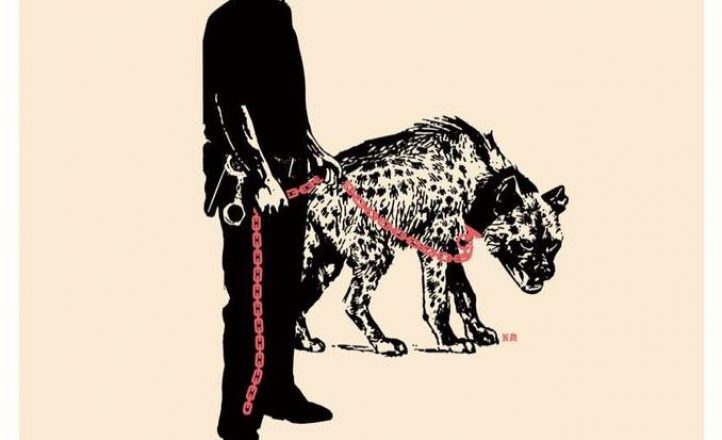 At the Drive-In went off like a fire-cracker back in the day and given their incendiary performances included a well-documented implosion during their Big Day Out tour over fifteen years ago, a reunion seemed largely improbable. As rock fans know only too well, they actually did reunite having dealt with their inner machinations to return as a functional touring unit. Any veteran punters still mining the inevitable nostalgic comparisons could be forgiven if they missed last year’s triumphant comeback tour. However, there have been opportunities to catch offshoot bands on other festival tours that have delivered interesting and solid live performances since the band’s initial demise. So, it was a mixed crowd that turned up to the Hordern on this long weekend to catch the latest reinstated version of At the Drive-In.

Kicking of the show was garage rock trio Le Butcherettes, headed by the ubiquitous Teri Gender Bender, initially wearing a pair of olive green overalls with a scarf.

Opening their set with ‘Burn the Scab’, the vocals echoed throughout the venue as people began wandering in. ‘Demon Stuck in Your Eye’ had a very White Stripes feel to it whilst ‘The Devil Lived’ and ‘Boulders Love Over Layers of Rock’ were vocal driven songs with the keyboard lines and bass following the melody. As Gender Bender’s glare was enhanced by the red stripe painted across her eyes and face together with her whipping long dark brown hair, the lighting strobe effects and the rhythm section knuckling down led to audience focus on her sometimes exaggerated stage movements such as shoulder shuffles, crab like walks and leaning right back.

‘I’m Getting Sick of You’ had a simple but strong guitar chord and percussive attack and briefly saw Gender Bender centre stage without a microphone, yet singing at the audience. The strong chorus driven song appeared to delve into improvisational territory as did ‘Witchless C Spot’ that employed some delay effects and a synth moog vibe before the kick drum came back in to lead the charge. ‘Stab My Back’ had a bit of groove, almost dance funk sensibility but ‘The Leibniz Language’ saw Gender Bender screaming away after the keyboard introduction took the song into abrasive and intentionally jarring sections with a tremolo vocal style adding tension.

During that song, Gender Bender put her guitar down and rapidly removed her overalls to reveal her red dress, heels and stockings look to an appreciative audience before the three piece closed their set with ‘Henry Don’t Got Love’ chock full of chord stabs, delay lines and the odd crowd sing-along. As a support act, Le Butcherettes did a great job getting the crowd’s attention as they ripped through a variety of interesting songs with a slightly unhinged performance style to it over 45 minutes.

As the changeover to the headline act took place, the lighting soon better revealed the backdrop of the In•ter a•li•a album artwork, essentially a very large hound. Lights dimmed and At the Drive-In, all dressed in black, strolled onstage. Opening with ‘Arcarsenal’ from Relationship of Command, guitarist Omar Rodríguez coaxed feedback squeals whilst the crowd joined in with the vocals barked out by Cedric Bixler. The melody was barely intact amongst the cacophony. Whilst Rodríguez roamed his stage right area, Bixler was all over the place, jumping off amplifier stacks and prowling between vocal bursts. Feedback continued between songs and that sort of approach became a running method throughout the eighty minute set so that if Bixler decided to have an impromptu rant on any given topic, there was a musical accompaniment underneath.

‘No Wolf Like the Present’ from In•ter a•li•a was next up and presented an almost Jane’s Addiction feel with a big chorus and spatially textures guitar lines within the chromatics. It also saw Bixler stage dive into the crowd for a quick surf. Following a brief rant, he was back on stage to unleash fury on an unsuspecting microphone stand during the hit ‘Pattern Against User’ whereby the crowd sung back the key words with enthusiasm enhanced by Rodríguez’ backing vocals. As with most songs this evening, the bass and drums were locked in, adding the odd fill or embellishment whilst the twin guitars interspersed strange sounds amount the riffs. A newer song like ‘Continuum’, which was played next, being a prime example as when not a structured song flow, it also involved adventures into jarring notes and various noises.

Prior to ‘Cosmonaut’, Bixler offered an unusual conspiracy theory on teeth being implanted with tracking devices or something equally absurd before jumping on and virtually toppling an amplifier cabinet mid song as Hajjar smacked his kit with force. By contrast, ‘198d’ from the Vaya EP contained a slower, quieter change of pace with blue and gold lighting effects as Rodríguez played textural harmonics with his sound changing to fully distorted chords in the chorus. More sounds such as pick scrapes noises added tension before another latest album song ‘Hostage Stamps’ had the use of red lighting, further pushing the hypnotic riff. Alternating between albums continued as ‘Sleepwalk Capsules’, another crowd embraced track from Relationship of Command was swiftly followed by ‘Call Broken Arrow’ where pitch modulating noises peaked alongside blasting drumming and Bixler crouching at the front of stage, howling his vocals, flinging his microphone around or simply singing from underneath the aforementioned speaker cabinet that was dutifully restored upright after the song by a road crew member.

One highlight was the rendition of ‘Invalid Letter Dept.’, subtly ushered in by the recognisable drum and guitar figure before the song itself, full of dynamics generated a call and response to the crowd with backing vocals from Rodríguez and a guitar sound full of delay effects with a tasty guitar solo that sprang from slow noise noodling into patterned lines. As the stage lighting went green, the band deftly segued into next song, ‘Enfilade’ which had the guitar parts climbing to a higher register crescendo, saw Bixler adding a section of melodica and used outro guitar effects to introduce ‘Napoleon Solo’.  As the stage took on orange lighting, ominous, almost Slayer-esque slow floor-tom beats introduced the main set closer ‘Governed By Contagions’ that saw Bixler jumping around the drum riser whilst the odd burst of spotlight on  Rodríguez added drama to climactic bends at the end of a guitar figure. As the song concluded and the band wandered off having thanked the audience, a humming, cycling wave of feedback filled the venue.

Not surprisingly, a white light spotlight hit the stage for a brief discussion from Bixler on the benefits of not allowing one’s imagination to be supressed. The huge hit ‘One Armed Scissor’ was the song everyone was waiting to hear live again and with the crowd’s enthused response, they were singing lyrics back at the band and were far less subdued than earlier. Passionately yelled vocals and swirling guitars building momentum to the chorus sections with a tight, loud rhythm section throughout making this another set highlight.

As the show ended, punters were left to navigate through a sea of smashed beer cans and a sticky concrete floor. Overall, the sound mix tonight had been very good and the crowd were not too rowdy, probably given many were at the BDO over 16 years back. Most importantly, At the Drive-In played a captivating and entertaining eighty minute set as did Le Butcherettes. It was both a unique and thoroughly entertaining experience.