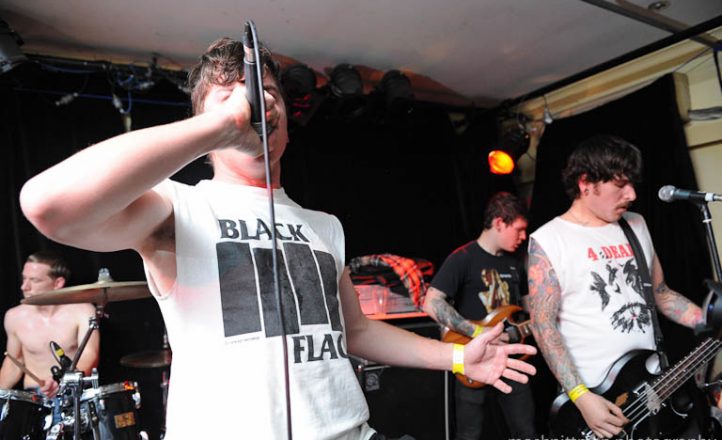 It was only 1pm when Sydney’s Bastardfest was opened by the technical menace of Ignite the Ibex but already the crowd was a good halfway to capacity and the “Chill” Stage was anything but. Not knowing why this band wants to immolate antelope doesn’t matter. What’s important is the skill with which they deliver their particular brand of 8-string guitar death metal and the fun they seem to be having while doing it, with one dude even wandering up to the back of the room for a moment and playing amongst the crowd. Dawn Heist took their time getting underway but once they did they were much more together and impressive than they’d been opening for The Haunted earlier this year.  This is certainly not the most original band going around, but they tore into their sample-embellished modern metal with real gusto.  No nonsense old school thrash n’ death is the order of the day from Perth quartet Enforce and it didn’t take long before their catchy riffs were moving heads. Even their earliest songs would have been brand new to most of these people, but their classic style was like an old friend and a slight hiccup as they changed lead vocalists for “Sacked” didn’t really upset their momentum too much.

With the last notes of Enforce’s “Tank” still ringing in their ears, the audience poured into the top room for the main stage’s opening act, Perth progsters Chaos Divine. Being the most diverse and melodic band on the bill did nothing to restrain the welcome they got and the stand-in for regular guitarist Ryan (apparently somewhere in Europe) knew his stuff. Their tight and technical mix of genres was seamless, Dave Anderton’s vocal gymnastics faultless and they finished on a high point with the superb “At the Ringing of the Siren”. Five songs was barely enough but now it was time for the melodic death grooves of Anno Domini who have come along in leaps and bounds thanks to plenty of touring over the past year. With a tight and engaging performance, these Sydney lads showed themselves to be close to taking another step up the ladder.

It seemed a little strange for Ouroboros to be on so early, but within moments of them throwing up immense walls of thrash n’ groove inflected death metal with those twin leads and Ev’s demonic vocals, whatever the time was mattered no longer. This band just seems to get better every time they play and it was perhaps a little disappointing that their set needed to be so short. Like Chaos Divine, we didn’t really get to see enough of them. Downstairs, Daemon Foetal Harvest injected some old school brutal death metal into the proceedings. Taking their cues from the classic Floridian school, their approach may be a little formulaic but there simply isn’t a lot of local bands around doing this anymore as well or with the same level of conviction as these guys and they were solid as ever.
Underneath a gigantic banner that almost took up the whole wall behind them, Bane of Isildur unleashed their brand of melodic battle metal to what was the biggest reponse of the festival so far. Daubed in war paint and brandishing poleaxes, the band swept up the crowd with a furious set of epic and heavy death metal. As their final performance with departing bassist Ray McGill this was a fitting send off. IExist offered a distinctive change of pace from the bludgeoning death metal of most of the bill so far. Somehow squeezing themselves onto the tiny stage, the restricted space was  no barrier to the six-piece assault as they delivered an energetic performance of short but furious triple-guitar sludgey hardcore/metal barrages, providing a healthy contrast to the other bands and proving themselves to be one of the stand-out acts of the tour.

Perth nutters Claim the Throne have the same battle-metal look as Bane of Isildur with warpaint and chain mail but this band is about the victory party, not the war, and everyone was invited. In between rousing metal singalongs, they were cracking jokes and swigging beer, with keyboard player Jessalina showing herself to be up to the task by chugging from a funnel with the room’s hearty encouragement. Canberra veterans Pod People also have a lighter-side attitude that’s all about rocking out but that doesn’t apply to their actual music, which is some of the heaviest doom imaginable. Enormous riffs and mammoth grooves shook the room (accompanied by JJ LaWhore’s patented cheesy rock moves) with vibrations probably being felt downstairs, where Aussie legends Dave Tice and Mark Evans – two guys responsible for thunderous riff-fests of their own back in the 70s – were rocking through a set of classics.

As Dave Haley settled in to the first of an incredible three full sets this evening, Ruins unleashed their howling assault, marking another change of pace for the event. Their set was cold and calculated menace, a tempest of epic atmospheric black metal decimating the room, they almost invoked a blast of icy fury from the Tasmanian highlands, which would have been a welcome relief for the punters cramming in to watch. Jamie from Damaged to joined them for a run through Celtic Frost’s immortal “Dethroned Emperor”, adding his manic coiled snake persona to an already impressive performance to a huge roar of appreciation.

Fronted by the odd spectacle of heavily-moustachioed Les Jobson in tracky daks and socks,  Brisbane’s Dreamkillers introduced themselves with the Black Saturday tale “Smoke Over Marysville”. The band’s strangely abrasive melodic hardcore was probably a curiosity to younger sections of the crowd, while others refamiliarised themselves as  Jobson barked, lunged and ultimately flailed around on the floor. At least he keeps his clothes on these days.

When the Dreamkillers finished, Bastardfest was running about twenty-five minutes ahead of schedule. Any who thought that would give them an extra few minutes at the bar between sets was in for a surprise, as Blood Duster proved themselves not to be another slack-arsed Aussie band and started almost right away. If there’s any active band that could be called an institution in Australian metal, this is them. With their last appearance in Sydney more than three years ago, the room filled to bursting point and the madness began. Beltsy was absent – Jason told everyone he was dead – and a hugely beefed-up Tone Bone prowled the stage in a Katy Perry t-shirt, growling at the crowd from behind his sunglasses. PC sipped wine like the very prat his songs mock, Tone decided to light up a smoke, the pit went berzerk and the groove-ridden grind rock blasted the walls out. As Jason constantly tried to ask the crowd who the best bands were (“Who’s the best metal band from Sydney? Mortal Sin, or… anyone else?”), Tony was in riotous form, abusing absolutely everyone. They played some songs too: “ThreeOhSevenOh” (somewhat ironically), “Northcote” (thanks to a suggestion from the crowd), and others that weren’t about Northcote. It was a classic Blood Duster show, unpredictable, crudely offensive and enormous fun. JJ from Pod People stepped up for a couple of tunes too.

Extortion perhaps suffered a little by having to go on straight after the near-suffocating Blood Duster experience, with most people heading outside for some air and maybe beer that stayed cold long enough to get it across the room. But the smaller crowd was no significant barrier. With a chaotic explosion of punk energy, Extortion tore through a high-impact, high-speed set of D-beat crust mayhem that closed the terribly-named “Chill” stage with style.
Psycroptic had perhaps a slightly smaller audience than Blood Duster but the lack of ventilation in the Sando’s top room meant the place was like an airless sauna smelling of rank sweat and body odour when they took to the stage to close the event.  Dave Haley, now into his third straight set behind the kit, was simply effortless, as if the grind and black metal he’d just played were merely warm-ups.  Stage left, his brother Joe was tearing out an endless stream of constantly changing riffs with Cameron Grant adding a groove factor from the opposite side. As their first show in Sydney in almost two years the crowd was hungry for new stuff, which sweat-bathed frontman Jason Peppiatt quickly introduced, such as “Carrier of the Plague”.  There’s a different energy to the newer material, with somewhat more melody and riffs that grind for longer than a few seconds each, but they still fit into Psycroptic’s technical framework of unrelenting brutality and the audience drank them in right away. After months being cooped up in the studio, Psycroptic blew the door off the cage tonight and unleashed the perfect storm of technical death metal to finish off a superb day of extreme music.