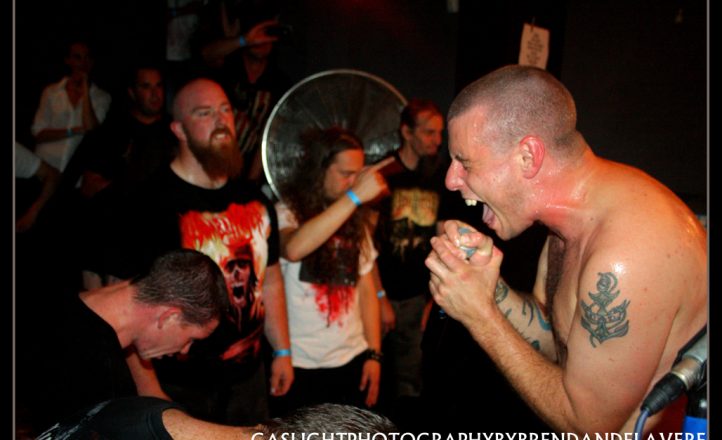 The weather was milder than it was for this event last year and the attendance was noticeably less as Bastardfest did its second go-around at Sydney’s Sandringham Hotel today. Festering Drippage warmed up the sparse early afternoon crowd with a quick set of good old grind n’ death before Alice Through the Windshield Glass stepped up with matching basketball singlets and their dense, mechanically-tight onslaught. They were somewhat more engaging and with more of a groove than during previous encounters but their welcome was as worn as their uniforms are naff by the close of their set.

First clear winners of the day were Newcastle four-piece Cerebral Contortion who blasted out of the gate with a neat line in pure old school thrash in the Kreator vein, working up the crowd nicely and throwing in a cover of “Piece by Piece” just to show they meant business. Following them it was time for Perth’s Animistic to make their Sydney debut, opening the main stage. After one song, one wag shouted out for them to play something by The Acacia Strain and if you’re looking for a more than decent local version of that band then Animistic is it but a lack of an identity of their own lets them down.

As Silence Breaks have done a lot in the last twelve months, so it seemed strange they were on so early. Their melodic metalcore is as generic as it is predictable, but they’re extremely good at what they do and this afternoon they brought their A-game, clearly seeking to win over the crowd that they probably knew from their experience opening for At the Gates were going to be hard to please. They may not have necessarily succeeded but they put on an impressive  show in the attempt. Daemon Foetal Harvest is more in line with what people are used to at Bastardfest and got the first big crowd of the afternoon. Bodies got moving to their relentless brutal death metal attack, which is grounded unashamedly in mid-90s Cannibal Corpse worship but solid and demonically heavy.

Datura Curse have something that many of their fellow metalcore bands don’t – an actual hardcore edge, and one that doesn’t rely on chugging breakdowns. Instead they cut loose with crunching riffs and Swedish-style unison guitars for one of the better modern crossovers on the local scene. While the band carves out their solid, groove-laced and melody-ridden set from the stage, vocalist Sean Bowden is a coiled snake of frenetic energy amongst the crowd.

With their bass player Alex Nicholson still lost in Sydney’s gridlock, Beyond Terror Beyond Grace took to the main stage and immediately laid waste. Dan Grainger set out a course on his kit for guitarist Scott Heldorf to overlay with a ceaseless barrage of sonically intense subterfuge as vocalist Blake Simpson threw himself around like a demon scarecrow before announcing ahead of their last song that this would be their last ever performance. A shame.

A contentious addition to the bill, Aversions Crown tried everything they could to appeal to the audience without much success. They aren’t terrible by any means but their crowded, ritualistic deathcore did little to move the punters and their vocalist’s rather half-hearted attempts at meaningful banter went equally unremarked. Grindosaurs Fuck… I’m Dead made their first Sydney appearance since Slaughterfest 2011, opening a pit up almost instantly. Fridge-sized frontman Jay held court in a blood-spattered butcher’s apron, cajoling the crowd as his bandmates splattered them with blast after blast of anal-obsessed, groovy, gore-soaked and filth-ridden dirty ditties.

There was barely a pause for breath before King Parrot launched their attack, and hardly time for another before the whole band went berserk. No one was safe. Not the crowd, not the sound guy, not even the venue. Vocalist Youngy rampaged through the place, leaping onto the bar, terrorising the barmaid, pouring beer and jugs of water over everyone in his way. The stage and PA was treated with complete disdain as they savaged the crowd. By the end of the set, the Chill Stage was anything but, covered with a sheet of liquid with the foldback strewn around the floor. It’s been a long time since any band has given less of a fuck than King Parrot.

Astriaal took things to another place entirely, evoking distant icy realms of twilit wilderness.  Arzarkhel played the role of enigma, completely draped in a cowled hood and full-face mask, howling and intoning as the band backed him up with mesmerising mid-paced melodic black metal. Always a group to strike precisely the right balance between malevolence and melody, Astriaal were again on the money tonight.

Originally further down the bill but bumped up through cancellations and reshuffles, Norse weren’t about to disappoint, calling down a classic-style Swedish melodeath that set deep hooks in those hanging around the Chill Stage and showing off the impressive chops that get them added to virtually any metal bill that matters.

Blood Duster were always going to be guaranteed crowd-pleasers and twelve months after their last visit to Sydney numbers swelled to close to bursting point before the Main Stage. After a demand for all the lights be turned off except for a single spot, the mood from the band seemed more convivial than last year and yet they were no less entertaining as they doled out their usual repertoire of grind n’ groove, action and abuse. Having a new album no one can hear meant they didn’t need to clutter up their set with recent tunes although a few were mixed in among the likes of “ThreeOhSevenOh” and “PissStomper”. “DrinkFightFuck” saw what looked like half the room up on stage with them and the whole thing descended into chaos. Anything else would have been a disappointment.

Slotting in between Blood Duster and Psycroptic is no easy job, as Extortion discovered last year, but the room wasn’t as deserted as expected when Disentomb unleashed their hell. Their frenzied blastcore is impressive in small amounts but lack of real variation and an apparent desire to be extreme beyond all else renders them tiresome after more than a few minutes. Still, some stuck it out.

Psycroptic was on their third visit to the Harbour City in as many months but their popularity was undiminished. There’s a reason why they keep returning to full houses again and again – they are a killer live band. A month ago Psycroptic almost stole the show from Cannibal Corpse and tonight they brought the Bastardfest tour to an end with an indomitable performance. While Dave Haley nails everything behind the kit and his brother Joe unleashes his formidable array of ever-changing riffs, Jason Peppiatt provides the focus. So much more than just a death metal vocalist, he is very much a front man, both engaging the crowd and leading the band through their enviable catalogue of technical brutality, comprised mainly of The Inherited Repression material although earlier blastapieces like “Colour of Sleep” also got a look in. It was the perfect ending to a massive day of metal pulled together by experts with a love of the local scene and not a foreign band in sight. Long Live Bastardfest!