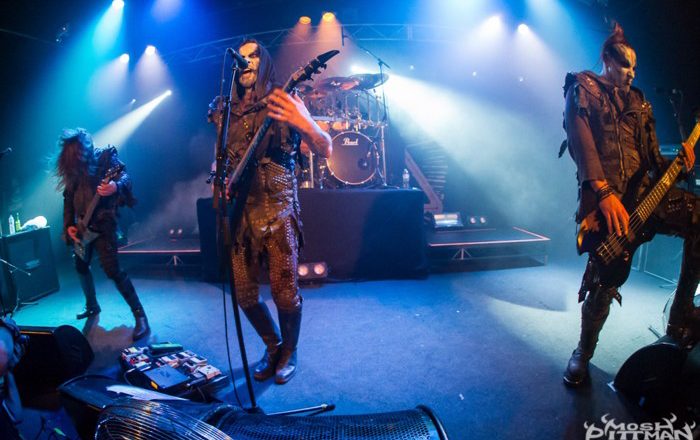 It has been a long time since a crowd lined up to near the end of the long laneway outside Sydney’s 1000 punter capacity venue for a black metal gig but in this case, it is not surprising. The trials and tribulations of the great Polish blackened death band Behemoth’s front man Adam Darski aka Nergal are well documented. His endurance and dedication are remarkable attributes that are evident in the unrelenting approach to creating music that pushes the envelope. The support acts have a similar approach to non-compliance but once the stage set up for Behemoth was revealed, it was clear that this was quite probably the metal show of the year. As their fourth tour here and in support of the complex The Satanist album loomed, there was a substantial couple of bands to appreciate beforehand.

Opening the evening was Bölzer whose primitive, minimalist two piece style reminded one of the impeccable Inquisition. The Swiss duo bolted through their set with guitarist and vocalist Okoi Thierry Jones to the side of stage as drummer Fabian Wyrsch hammered the kit. Octave runs, growled vocals, a scooped sound and just an overall sense of sonic dread meant their set was executed with precision. There was also an element of groove amongst the blackness, even into double time sections. The use of heavily distorted atonal guitar chords filled out the sound as did the cymbal crashes and powering snare cracks. It was a lesson in stripped down aggression.

Sweden’s Watain were on next and they wasted no time in pummelling all and sundry into submission. Following an ominous backing tape introduction, chiming guitars allowed the band to enter the stage as front man Erik Danielsson soon took position, leading the band to unleash their doom. He remains highly capable and if not offering heretical banter then the sounds through the PA pumped out ghostly dungeon sounds. Also, it was nice to see second guitarist Set Teitan aka Davide Totaro of Dissection fame paying tribute to Darth Maul with his makeup. Jokes aside, the band were tight and took no prisoners with their tight delivery. Guitarist Pelle Forsberg and drummer Håkan Jonsson were in defiant unison on attacks presented with songs such as ‘Storm of the Antichrist’, which bounced between black metal blasting to brief moments of blackened doom thrash as the crowd fist pumped away. Followed by more tracks of a similar ilk, the problem of hitting a sonic plateau was evident but only slightly. They really picked up on the dynamics with their last couple of tracks of the set, particularly with the closing song ‘Malfeitor’ which had melody, brutality and speed delivered as only an experienced, world toured band could offload to an already bludgeoned audience. It was a simply hammering closure to a set that was then followed by an inexplicably long pre-recorded wash of sustained keyboard chords. Very dramatic and very sinister.

So it was that the stage was cleared for the headliners. The much celebrated Behemoth have been to Australia a few times prior. But this time, in support of their triumphant magnum opus The Satanist, the band were in fine form, with a musical representation of muscle and sinew defying the odds. As the band took up their places, on walked Nergal with a couple of flaming torches to open proceedings with the slow, crushing power of ‘Blow Your Trumpets Gabriel’. It was welcomed with wild enthusiasm.

Aesthetics are an integral part of the Behemoth experience. Screaming his joy at being alive, Nergal launched into ‘Conquer All’ with plundering intent as the sonic hammering was dished out. Be it the huge symbolic triangular backdrop, the double bass kit on an elevated drum riser, the face paint or the use of incidental props, their show is both a visual and aural assault. As lighting offered a vast ranges of colours between the blinding strobe hits and brief bursts of pure, white light, the production was delivered with suitable ferocity. Elements of starkness were also offered up to accentuate the use of blood capsules for dramatic effect later on but the four piece simply nailed it from start to finish.

Zbigniew Prominski aka Inferno overlooked a simply mammoth double bass drum kit chock full of toms, cymbals and other percussive weaponry that would make Rush jealous. His speed and attention to delivering a consistently fiery black metal pace is up there with the drummers in Nile and Satyricon for precision. Similarly huge was Tomasz Wróblewski aka Orion whose towering stage presence matched his bass guitar thump. The band were rounded out with touring guitarist Patryk Sztyber aka Seth whose solo leads, full of wah pedal expressiveness traded off meticulously with Nergal’s fiery scalar runs when not delivering a rhythmic guitar onslaught.

Between songs, the use of atmospherics gave the band a chance to catch their breath before the next walloping. Keeping stage banter to a minimum, the set was a thumping blast. Back-announcing was deemed immaterial in favour of simply delivering a crushing set at pace. Some melodic introductions may have fooled the unwary but on the whole it was a largely unrelenting wall of musical force. Tracks such as ‘Christians to the Lions’, ‘At the Left Hand ov God’ and ‘Ben Sahar’ flew past with demolition-like efficiency. Following a unified bow to the audience under harsh, white light, the encore was comparatively slower but no less ominous as the final song ‘O Father O Satan O Sun!’ was performed and included more theatrics of a blood red lit stage, praising backing dialogue and use of partially silhouetted devilish horns. Behemoth live is a brilliant experience albeit an acquired taste yet each tour clearly sees the band getting stronger and more resolute with their mission.

Blow Your Trumpets Gabriel!
Ora Pro Nobis Lucifer
Conquer All
Decade of Therion
As Above So Below
Slaves Shall Serve
Christians to the Lions
Messe Noire
Ov Fire and the Void
Ludzie Wschodu
Ben Sahar
Alas, Lord Is Upon Me
At the Left Hand ov God
Chant for Eschaton
Ojcze Nasz
—
O Father O Satan O Sun!