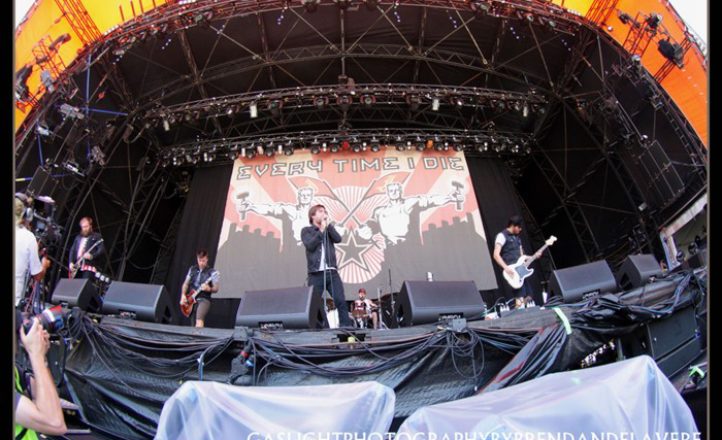 To say that it was a bit hot today is like saying that the Red Hot Chili Peppers are rather successful.  Even early acts like House vs. Hurricane, celebrating a huge 2012 by opening the Orange Stage, were feeling the heat as only the most extremely enthusiastic were willing to venue out into the noon-day 45+ degrees furnace of the Sydney Showground to cop an earful of melodic post-punk and metalcore. Those that did looked more inclined to simply stand around like wilting lettuce than stir too much pit action despite the band’s best efforts to get bodies moving, or really much of an audience at all. To be fair, that was probably more to do with the oppressive temperature than it was the music. House vs. Hurricane are as generic as they come, but they bring it on live.

And seriously, compared to previous years, the Sydney Big Day Out looked like a ghost town at this point , which could possibly have been attributed to a combination of factors like the weather, the somewhat shorter-seeming bill and holding the event on a regular weekday instead of the Australia Day holiday for the first time ever. The crowds turned out in the end though.

ME has recently returned from almost two years in Europe, during which time they’ve changed from sounding like Muse crossed with the Beatles to something like the Beatles filtered through Jeff Lynne to the point where one of their new songs sounds very much like “Mr Blue Sky”.  Their years on the road has turned them into quite a masterful live act however, but with everyone sheltering in the shade like cockroaches under the kitchen bench it didn’t look like many were appreciating them.

The quirky sounds of Every Time I Die were the next to fill the arena, a somewhat muddy mix doing as much as the heat to dampen their enthusiasm – nothing. Armed with a solid array of their metal/punk/math tech cross-pollination and Keith Buckley’s charisma and wisecracks, the New York five piece poured out a dynamic set that flowed like the sweat dripping out of the punters crazy enough to get a small pit going a the foot of the stage. Latest release Ex-Lives featured heavily but there was plenty of tunes from across their catalogue like “Floater”, “Wanderlust” and crowd-pleasing closers “We’rewolf” and “Indian Giver”, with Buckley giving props to Against Me! who were about to come on the adjacent stage. 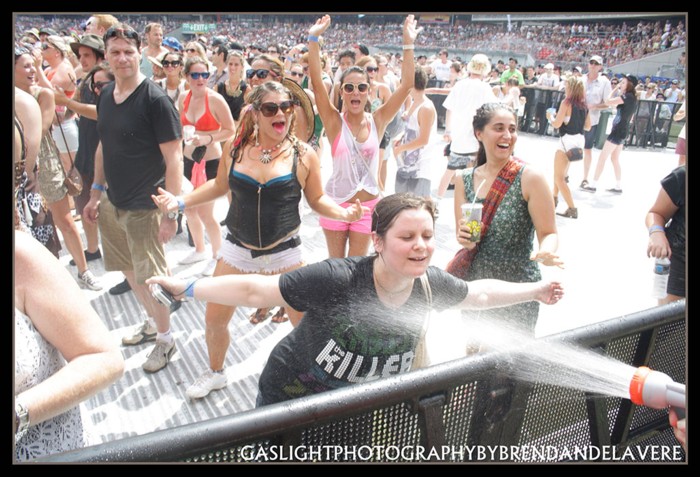 Buckley’s praise wasn’t just empty words. Looking formidable in killer heels, Laura Jane Grace stalked to the mic and kicked straight into rocking out, without a thought for the heat that was by now making just standing around hard work. Even replacing their drummer with The Offspring/Danko Jones’ Atom Willard on the eve of the festival was no hindrance as they ripped through bad-ass, fist-pumping punk rock – Grace even more magnetic, defiant and confident now than she was as Tom Gabel. Tracks like “Teenage Anarchist” and “Black Me Out” were so incendiary they were dangerous on a day like today.

Between acts, the all-robot Compressorhead kept fans entertained during the brief changeovers, but after seeing it a couple of times the novelty had completely worn off. It’s difficult to understand how this could thing could have been considered as a featured act – the hype for them was everywhere – and I inwardly cringed when, just before a massive gust of wind blew it over, nearly crushing a dude working there, I noticed Compressorhead t-shirts for sale at the merch stand.

Festival veterans Grinspoon finally managed to bring the cockroaches out from cover with “Hard Act to Follow” something of a clarion call. Fortunately for them too, the temperature had actually dropped a little and a teasing sprinkle of rain drifted across the arena. It was looking more like a Big Day Out now with a huge crowd dancing and singing to Phil Jamison and his merry men as they played what amounted to a greatest hits package. By the time “Rockshow” entered the picture the crowd was eating out of their hands. As good as they are though, and as awesome as it was to hear old favourites like “Champion” and “Post Enebriated Anxiety” cranking out around the stadium, Grinspoon didn’t really offer any surprises – an admirable but really predictable performance.

Much less predictable was finding Campbelltown’s deathcore monstrocity Thy Art is Murder on the same stage that Urthboy and Chance Waters had played on earlier. Within moments, this five-headed metal beast had smashed through the small but eager crowd before them like a wrecking ball. As the band bulldozed the ampitheatre with their ferocious, steel-trap technical grooves, drops and slams, frontman CJ MacMahon stirred a circle pit – something Keith Buckley had barely been able to do a few hours before. When he launched himself onto the crush barrier during “Whore to a Chainsaw”, sweaty moshers piled onto each other to roar into the mic with him.

Far away across the grounds, Off!’s Keith Morris was introducing his band’s set with a monologue delivered to kids stretched out casually on the grass, most in complete ignorance of what they were about to receive. Then the Green Stage erupted into a blaze of raging old-school hardcore that reminded those of us old enough to know of the real legacy from which an event like the Big Day Out had arisen. Blazing and uncompromising, Off! packed a whallop with every song they played, their momentum only broken by Morris ranting polemics between splats of razor-sharp hardcore that went over the heads of those relaxing on the grass but certainly got the old buggers down the front fired up. There’s no keeping old punks down, as Off! proved every second they were on stage and the headliners repaid some of their debt to Morris later when Anthony Kiedis leapt on stage wearing a cap emblazoned with their name.

As the evening moved in, the temperature dropped and the stadium filled as The Killers took to the stage. Many regular readers of this site probably don’t rate this Vegas four piece but make no mistake: this is a consummate live band that writes some of the best guitar pop songs of the last decade. When they opened with “Mr Brightside” they copped one of the biggest welcomes I’ve ever seen a band get at this festival and by now there was barely a place to stand that wasn’t in someone else’s personal space. Dave Keuning looks the classic rock god with his shaggy facial hair and array of Explorer and V-shaped axes and Brandon Flower epitomises the modern rock frontman, conducting the enormous crowd whether he was leaning over the pit or from behind his keys.

“Somebody Told Me” got every person in the arena singing and bopping, and then there was an awed moment when The Killers pulled off a stunning version of “Don’t Dream it’s Over”. To cap off an almost perfect performance, they added fireworks to the show as Flowers led Sydney into a rousing singalong of “When You Were Young” that revved up the crowd for the next act.

That next act was the Red Hot Chili Peppers. The band’s latest recorded output has received less than positive reactions from those in and around the Loud office, but they are a band with a long reputation as an unbeatable live act. The Killers had just set a pretty high benchmark – would they be able to compete? The answer was a resounding yes. As mentioned, their new songs leave something to be desired on plastic, but worked into the non-stop energy mill that is a Chilis live show they take on an entirely new life. When “Monarchy of Roses” opened, Flea burst into action and was barely still for the rest of their sweeping 90-minute set. Most of these guys are now fifty years of age but they made the younger acts look old and lazy with a display of frenetic human movement. Josh Klinghoffer proved his worth time and again, tearing shapes out of his guitar as he and Flea jammed head to head between songs, segueing in and out of the set list. An insane bass solo in “Around the World” laid down a path into “Scar Tissue” and then “Snow (Hey Oh)” that had the arena united in song and groove.

Flea interrupted his elastic band athletic routine long enough for a mid-set recitation of Blake’s “The Tyger” ahead of an extended Klinghoffer jam that became “Under the Bridge” to an enormous reception. The showground arena was lit up with phone screens as apparently every voice in the place joined Kiedis in song. It was a transcendent moment. A spastic version of “By the Way” spiralled into the first encore that began with Klinghoffer and Chad Smith jamming on a version of Zep’s “The Ocean”. Finally, “Give it Away” brought the Chili Peppers’ show to a rousing conclusion, ending with a final jam out and burst of energy that should have left no doubt in anyone’s mind that they had just witnessed one of the world’s greatest live bands.

The heat could have quite easily conquered the Big Day Out this year, but in the end,  as always, it was the talent that came out on top.