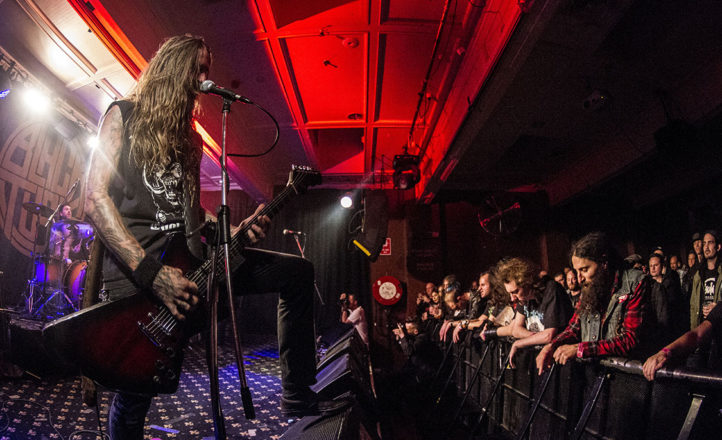 First off the bat are the crushing but polarising Dispossessed. The hard hitting, hard working trio kicked straight into gear with bursts of rough as guts crusty distortion and pounding bass lines.These guys have gained a name for themselves in such a short time, and demand the respect of those in attendance. When guitarist Birrugan Dunn-Velasco speaks, you listen, and when he gets his brothers on the mic to tell their story, about the past, about the recent laws for white folk that black folk have endured for years, whether it’s a poem, spoken word or freestyle rap, whether it’s one guest or five, like tonight, it is important you take it all in. In the end, no one speaks, everyone claps.
Second cab off the rank, Witch Fight, pump out the tightest fuzz from any two piece ever. These are some monster jams, it’s hard to believe they’re coming from just two blokes. Plenty of choice cuts from their full length Astonishing Tales Of… swirled about the fast filling room, entering ears and getting feet tapping.
“We are Black Tusk from Savannah, Georgia, and no, we are not Trump supporters!” And with that small bit of pleasing honesty the three piece ripped into a thick, sweaty set of meaty riffs and hooks.
Opening with the perfect hit of sludge and hardcore, ‘Embrace the Madness’, the three piece instantly reached a level of intensity that never subsided. The crushing ‘Gods on Vacation’ just kept the sweat pouring in the small band room. Guitarist/vocalist Andrew Fidler is a mess of hair and dirty riffs. The untimely passing of bassist Jonathan Athon could have been the end of the band, but forging ahead, with new bassist Corey Barhurst, the trio unleashed a monumental tribute of crushing riffs and licks. The thunderous ‘Crossroads and Thunder’ blasted ear drums as heads banged. A very short departure from the stage, before an encore of ‘Red Eyes, Black Skies’ tore the roof off one final time.
Having witnessed these guys in France with 15000, it was an experiment to see them in the smallest of venues. All hail the riff!