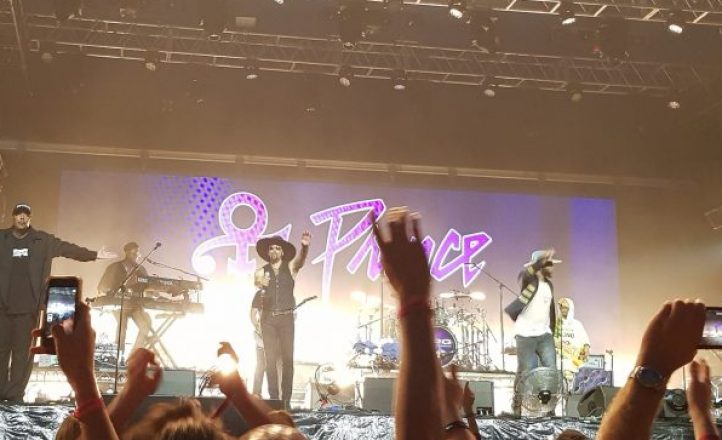 For any who doubt the relevance of a festival like Byron’s massive Bluesfest to a site like Loud Online, it needs to be remembered that the very foundations of rock in all its forms rest on a bedrock of blues. With five days of every variation on the blues it is possible to conjure in one of the best locations on the east coast, Bluesfest is a required journey for any genuine musicophile.

Bluesfest distinguishes itself from most of the other major Australian musical festival in one significant respect – it’s obviously aimed at older  fans as a family-friendly event. There’s no hordes of shirtless dudes showing off their tatts as they muscle through the crowds, for a start, and a lot more grey-haired couples on folding chairs and young parents pulling sleeping children in wheelbarrows and carts full of pillows. If there’s one thing it has in common with the others, it’s the aroma wafting from the Portaloos that jostles for dominance with the smell of weed that the drug dog at the gates failed to notice – and the booze prices.

After a morning navigating the mental holiday traffic in Byron Bay that ended at an excellent local burger place, we find that rain on Thursday has turned the Tea Tree Farm site into a vast field of mud; festival veterans clomp around in heavy boots or gummies as music blares from five stages housed under huge circus tents. It’s easy to grab a few brews and just soak in the atmosphere. Today’s offerings range from the insipid electro-folk of Asgeir, the red-hot James Brown-inspired soul of Con Brio and the pure boogie of festival mainstays and bona fide legends Canned Heat who open their set with ‘On the Road Again’. The excellence of Govt. Mule take the audience on a trip into extended, unpredictable jamming that gives them a set time far longer than any other act on the bill but we have to abandon them somewhere in the middle of one of their rambling pieces to go grab a decent spot for Robert Plant & the Sensational Space Shifters, our primary goal for Day 1.

Attaining this goal meant wending our way slowly through the heavy crowd watching Jamaican music legend Jimmy Cliff and his wildly energetic band delivering a hits package that had the audience singing and grooving along including ‘I Can See Clearly Now’, ‘Many Rivers to Cross’ and ‘Hakuna Matata’, which was obviously a massive favourite.  The politically-charged new track ‘Refugee’ also got an airing, proving that reggae and Cliff in particular is still a very strident social force.

By this time, we had managed to get as close to the stage as was possible without forking out an extra $300 each for front row seats. A guy behind us was moaning about having to put up with reggae artists since he got there at 6 o’clock. Another guy is screaming into his phone. Then the lights go down and there is an awed hush followed by a growing cheer as the band enter the stage under cover of near-darkness. With the first beat, the lights go up with Robert Plant kicking up his mic stand as the band swing into ‘I Can’t Quit You Baby’ to start a 90 minute odyssey through the singer’s legacy.

While Led Zeppelin looms large over that legacy,  tonight’s performance covers a deep repertoire of which Zep is just a small part. Plant – his mane of hair now a stately grey, his voice a deeper, resonant instrument – and his band stick mainly to deep cuts which they can re-interpret in extended folk-blues jams, this elder statesman of rock still looking as cool as ever as the group swirl around him, cutting loose in ‘That’s the Way’ or reining it in for ‘Please Read the Letter’. From the warm Moroccan tones of ‘Carry Fire’ to the wild folk-rock knees up ‘Gallows Pole’ and the encore that wound through ‘Bring it Home’, ‘Whole Lotta Love’, ‘Santianna’ and back again, this was a consummate performance from one of rock’s true greats, the shine of which was not rubbed off even by the one hour-plus wait to get off the grounds afterwards.

The third day of the festival – our Day 2 – begins for us in the Jambalaya tent with Con Brio smashing out another swinging set of big n’ brassy high-energy soul led by the amazing athleticism of frontman Ziek McCarter who moves with the elasticity of a young James Brown – and sings like him too. Following them is a visit to the Delta tent for a brief check-in with Aussie legends Chain, a dense cloud of second-hand dope smoke hanging thickly in the air. A couple of Byron-brewed beers from the Craft Beer Hall whet our whistle before we stake out a place in the Mojo tent for late superstar Prince’s band The New Power Generation. Featuring various members of the Purple One’s touring entourage from the last 28 years, the NPG was an unstoppable force of pure funk. Four vocalists including André Cymone, who was with Prince in his first band, an outstanding lead guitarist in Homer O’Dell, this was the ultimate tribute to one of the world’s greatest musical artists.

It was a energetic and dynamic show wall-to-wall with hits both faithful to the originals and with the group’s own spin added, from ‘Sexy MF’ and ‘Sign O the Times’ to slower grooves like ‘Diamond and Pearls’ and a moving ‘Nothing Compares 2 U’ that resonated deeply with me due to its connection with Chris Cornell and his final American Songbook phase. Támar Davis declaring they had “one more” once returning to the stage after an hour was an understatement as they strung together a montage of songs that lasted another thirty minutes, closing at last with ‘Kiss’. There were other performers left to watch tonight, but the NPG was so good we left for the hotel on a similar high to the previous evening.

Sunday was cooler but sunny and the rain that was threatening further north still hadn’t impacted around Byron so the ground was actually starting to dry out a little at the Bluesfest site. The Mojo tent was hosting charming dual melodies of Swedish two-piece folk chicks First Aid Kit who proved to be a solid draw. Across the field, the Craft Beer Hall was thumping to the sound of Walter Trout pounding an innocent guitar into submission next door. After a few more brews, the secondary objective of locating the most inappropriate band shirt for a blues festival was achieved thanks to the dude wearing one from Grindfest III, beating out the guy in the Fear Factory shirt from the day before.

Tonight’s spotlight was on Melissa Etheridge, and she did not disappoint. Introducing herself to the stage by bashing away on the drums, she then sauntered to the front and proceeded to lead the crowd through a ninety-minute set of solid blues rock jamming, kicking off with ‘Your Little Secret’ and busting into a three-minute guitar solo. Until this evening I actually wasn’t aware that Etheridge did all her own guitar work live, but this was definitely the highlight for me. She turned every song into an extended blues jam/singalong that was just a pleasure to be a part of. ‘Bring Me Some Water’, of course, became a massive crowd karaoke and there was also a drum solo with Etheridge sharing the kit alongside her drummer, taking it in turns to pound the shit out of it. Another remarkable performance.

Sheryl Crow came out next with her gigantic backing band that featured a lap-steel player, organist, two guitarists, drummer and bassist/percussionist, swinging straight into a fun set of pop-flavoured country rock. Mega-hit ‘All I Wanna Do’ featured surprisingly early, and following a quip about her kids thinking all her money comes from movie soundtracks, the Cars song ‘Real Gone’ rolled out. Crow’s was an enjoyable show to round out our Bluesfest experience, even if she was overshadowed by Melissa Etheridge’s dynamite performance.

Bluesfest is a festival that doesn’t have anything to prove. It’s not out to be cool, so it is. It’s huge, it’s fun and it’s the best run festival I’ve ever attended. Next year will be the 30th anniversary, so if you’ve never been before, 2019 will be the one to catch.