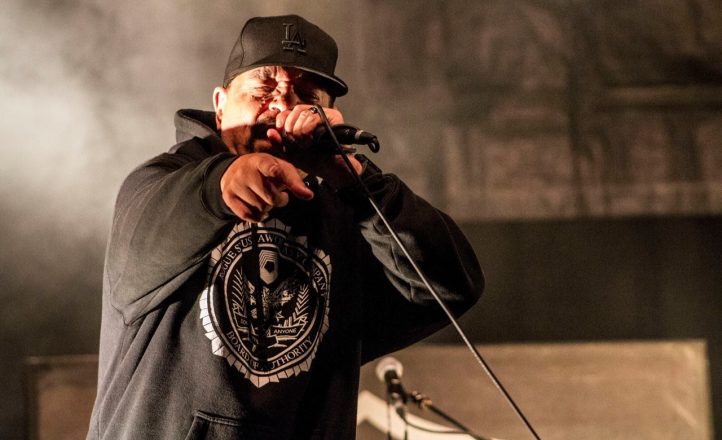 Walking through the crowds of people admiring the lights of Vivid, oblivious to the action about to take place in the grounds of Luna Park, there was a feeling that this was going to be the show of the year.

Entering the Big Top, metalcore hard hitters Void Of Vision were warming up the less than capacity room. With the top balcony curtained off, it could be said ticket sales for Sydney weren’t so great. Catching the last couple of songs, V.O.V produce a solid sound, huge meaty cuts, circle pit inducing riffs had many in the crowd nodding their approval.

As the crowd filled out, hip hop stalwarts A.B Original took the stage, led by Dj Total Eclipse scratching up a storm. The controversial crew have hit the nation hard, forcing thought and discussion. MC Briggs and Trials hit out with choice cuts from debut album Reclaim Australia including “2 Black 2 Strong” and “Dead In A Minute”. The two MC’s bounced off each other, from one side of stage to the other, getting the crowd amped up, middle fingers in the air. Triple J favourite “January 26” rounded out the set, garnering a huge response and definitely winning a number of new fans.

As excitement grew for the one and only Body Count to finally take the stage, the lights darkened and that unmistakable riff of Slayer’s “Raining Blood” rang into the night. Opening with a double dose of Slayer, “Postmortem” flowed into “Bowels of the Devil”.

From that moment, we were treated to 90 minutes of awesomeness that was somewhere between metal, punk and rap. It was completely hardcore. “Manslaughter”, “There Goes The Neighborhood” and divisive new single “No Lives Matter” saw the circle pit heaving, wet and full of action.

Main man ‘Motherfucking’ Ice-T ‘Bitch’, (‘bitch’ referring to the men in the crowd, as they’ve all grown vaginas as he so brutally put it) is an enigma on stage, letting us know that it has taken Body Count 22 years between visits because ‘he had some shit to do’. Original Body Count Ernie C is a monster on guitar, laying down some huge riffs and thrashing solos, whilst bassist Vincent Price stands imposing on all sides of the stage, even jumping down onto the barrier to get close to the action.

Ice-T likes to base his shows on the amount of ‘action’ in the pit, and despite the lower than expected attendance, the pit in Sydney was giving other cities a run for their money. “Drive By” and “KKK Bitch” upped the ante as Ice gave us his thoughts on American politics, giving a stiff arm to a crew member in a Donald Trump mask. Closing the main part of the set with “Talk Shit, Get Shot” with its machine gun chorus, and the still relevant “Cop Killer”, the crowd lost their shit in the pit. We were treated to the virtual encore, so as the lights went dark, we imagined that Ice-T and Body Count had left the stage, before they returned to destroy us with “Disorder”, an Exploited cover, “Born Dead” and the almost-ballad “This is Why We Ride”.

It’s no mean feat, but anyone in attendance would agree, this was a show not to be missed.