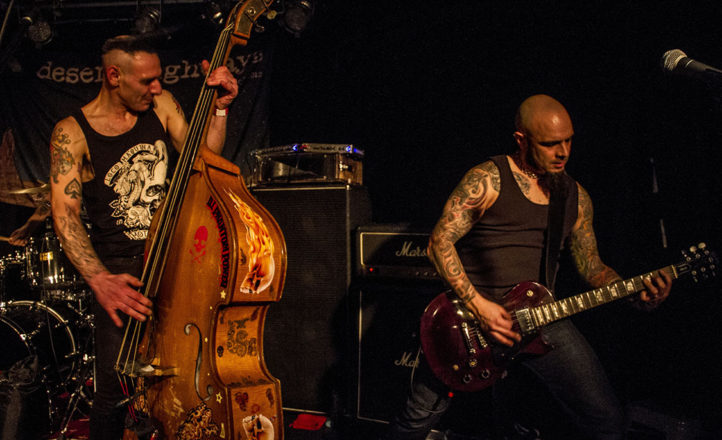 It began as a slow night for Sydney’s first taste of the celebration of ‘Metal, Beer and Rock’ that is the Brewtality Festival, which may have been an indictment on local crowds or merely the fact that there seemed to be a slew of other events on the same night including a free Sydonia gig at the pub next door, Billy Talent and the Lazys across town, a black metal show in Newtown and another free metal event at the Stag. If Desert Highways’ timing was off with the date, their instincts were sound when it came to the bill, right down to nailing the spot-on replacement for last-minute cancellation Heaven the Axe.

Early acts like The Mis-Made, Vaporised!, The Archaic Revival and Flaming Wrekage were all missed by this reviewer as I took my sweet ever-lovin’ time to get here, but I have it on the authority of others that they all respectively tore shit up. With just enough time to grab an over-sized can of Brooklyn Lager, I headed in to watch Black Like Vengeance, an impressive Melbourne death metal assault fronted by former Loud mag graphic designer and obviously part-hellspawn Sherri-Jesse Tantawy whose voice can switch instantly from Scabbia-like tones to a demonic roar that would make Gossow give up if she hadn’t already. Upstairs, where part of the venue was being shared with a pole dancing competition, Comacozer were taking a decidedly different tack in the form of ambling, jammy instrumental desert rock, providing a nice late-afternoon chill out.
Downstairs, the Factory was being taken apart by the sludge-ridden, hardcore-flavoured death metal rumblings of Colossvs, in a four-piece configuration and with former vocalist Chris Tew re-installed. On a stage decorated with candles and their drab, stark backdrop, Colossvs re-educated the now-growing crowd on the aesthetics of dark, extreme noise.
The Charge promised a lighter side with straight-forward, desert-flavoured modern rock, overcoming a technical hitch that almost kept them out of the game, but back downstairs was now where the action was with a near-full room welcoming rockers Lillye, who were taking the place of femme-fronted whirlwind Heaven the Axe, out of commission with illness. The locals took every advantage of the opportunity as singer Virginia Lillye took less than a moment to start rocking the fuck out of the stage while the band launched a succession of meaty riffs and cacthy hooks which had the festival audience in the palms of their collective hands.
Perhaps it wore them all out a little too, because Perth’s excellent The Devil Rides Out were blasting forth their hard grooving tunes to almost no one upstairs. A shame, because The Devil plays a mixture of bad-ass hard rock and insidious stoner groove like no one else, trudging through the ruined landscapes of Joey K’s desolate lyrics like vigilantes. Armed with more strings than an orchestra, The Levitation Hex now took their place on the downstairs stage, presenting a menu of twin-vocal technical prog metal. This band’s song writing is more controlled than that of the groups which spawned it but just as exceptionally delivered and no less interesting, even in a room that did the music’s nuances no favours.

Hobo Magic don’t care for nuances. They probably don’t care about much at all. These guys are simply all about thrash-as-fuck stoner punk, a hurricane of energy that’s flat out and fun, teetering on the brink of complete chaos from beginning to end. Fucking cool. Now it’s time for Darker Half, probably the most metal band on the bill with their melodic old school twin guitar style and high-end vocals. Frontman Vo Simpson injects occasional doses of self-deprecating humour into the mix and the addition of Jimmy Lardner-Brown to the team now puts their shred factor off the scale, though I’m skeptical of their ability to pull off a cover of ‘Aces High’ – until they actually fucking do it! Hats off. Upstairs once again, Hostile Objects are reclaiming the term hardcore with a bruising set. Zero melody, no slow bits, just a relentless battering, nothing but a primal release of angry energy that would make the scene kids rethink their choices.
Southeast Desert Metal come to Sydney with a strange kind of mystique that comes from being an outback Indigenous metal band. It’s a bridging of cultures that proves the universal appeal of heavy metal music and the downstairs room is full long before they hit the stage. When they do, they pretty quickly make it their own. Bestowed with a frontman who simultaneously interacts with the crowd while appearing completely disengaged from it, they confidently take command with a sharp set of rock-laced melodic metal dripping with criss-crossing leads and solid hooks. A good band who know how to rock a room.
Another band that knows the same art is the Fireballs. Twenty years on from when they seemed to play every day of the week and ten since their last show in Sydney and this band have lost none of their impact. Eddie Fury no longer has the same enormous quiff of his lean, double-bass wrangling bandmate Joe Phantom but he equals him in energy as he belts out the tunes and deals out the jokes whilst also pounding the skins with an off-the-hook intensity. Twin guitars make them a far more metallic prospect than they were even back in the day, the psychobilly equivalent of Slayer as they work themselves into a fury, ripping through their set like maniacs.

You’d be forgiven for thinking that old timers the Celibate Rifles couldn’t rock like they used to, and – actually no, if you think that, you need a punch in the face. The Rifles close out this gig like every show they’ve ever played, firing off short sharp shots of sarcastic punk rock like lives are depending on it. Kent Steedman and Dave Morris unleash the rifferama around ever-laconic frontman Damien Lovelock – looking fitter and leaner than he did twenty years ago – working the crowd with the vitality and humour that’s revered them as one of the country’s best-loved underground acts. Every song is a surefire hit that keeps the crowd cheering until the final note screams into the darkness. It’s a rollicking, fist-pumping finish to a evening filled with some pretty epic performances, and if the stars align and the figures work out, let’s hope we can do it all again next year.