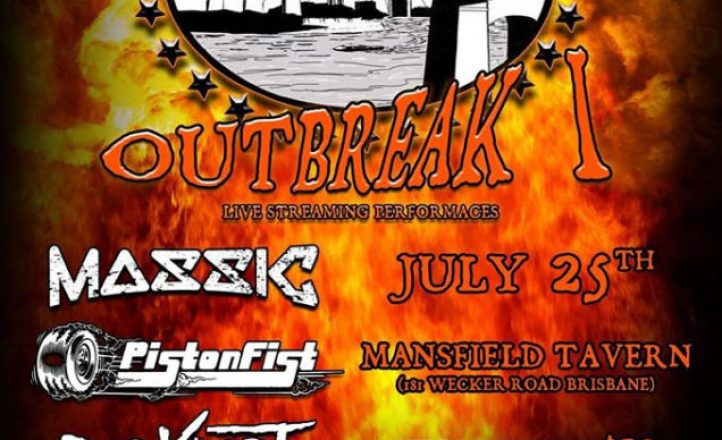 These are times of chaos and fear, due to a highly infectious virus and people who can’t seem to follow a few simple steps to help contain its rapid spread helped bring our country to its knees this year.

Lucky for my home state of Queensland, we seem to have begun to come out the other side, despite the fact that it is beginning to rear its head in our southern states again. This does come at a small cost though, due to entitled bogans ruining the simpleness of a night out in Queensland we have been asked to sit at any venue where alcohol is served and this will make this evening interesting, as those of lucky enough to be here begin to clear the fog of months spent inside dreaming of social interaction over loud music.

In times past Brisbane’s Mansfield Tavern was once well known as a venue for heavier music, with its stage room dubbed The Rock Arena for as long as I can recall (my beginnings in and around the Brisbane scene only stretch back to the mid 1990s) having once housed some of the biggest names in hard rock and heavy metal both internationally and locally, before falling by the wayside to other venues located closer to the CBD and Fortitude Valley.

Tonight, we see the beginning of the rebuild of live heavy music in Brisbane as well as, hopefully, the rejuvenation of a once loved and famed venue. Sold out to maximum capacity (reportedly around 120 people) while also being streamed out online to anyone who bought that option as well as being MCd for the stream, and us, by Ado from Blokesworld.

Brisbane thrashers Odius open the night with a bulletproof attack of thrash ragers fitting of The Rock Arena’s rousing return as a leading live music venue on Brisbane’s south side, finishing on a brilliant cover of Angel Of Death that has many of us trying to mosh in our seats. After a short introduction, the intro tape rolls as the lights dim for the nu-metal stylings of Diskust. Wearing masks and makeup, the band blast through a set that sounds punchy and tight driven by the kind of manic energy that drove a young Slipknot in the early 2000s.

One of the fastest risers currently on the Brisbane scene are the next band,  PistonFist, made up from a group of blokes who have seemingly always been amongst Brisbane’s vibrant heavy music scene in different bands. Stylistically the band are different on an already varied bill, musically akin to bands such as Clutch and Crowbar, switching from sludge to boogie rock and back in a track. Towards the end of the set they throw in a great medley of Black Sabbath songs, remaining true to the originals with a little added heavy. Local merchants of hardcore groove Massic never fail to put on a great show. The recent layoff has done nothing to dampen the spirit of this animal. The band perform as if their lives depend on it, putting an astounding finish on what has already been a great night. Sitting down and/or streaming online are fast becoming the current normal way to see live music. It may not feel comfortable as we are all forced into these new norms, but it is integral to any music scene staying alive or dying out completely now.

So, grab your beer and sit down and mosh in place! Get to your local venue and support as much as you can before we know it things will be good again, we just have to get through the short pain first.

Sitting down at gigs is fucking metal!