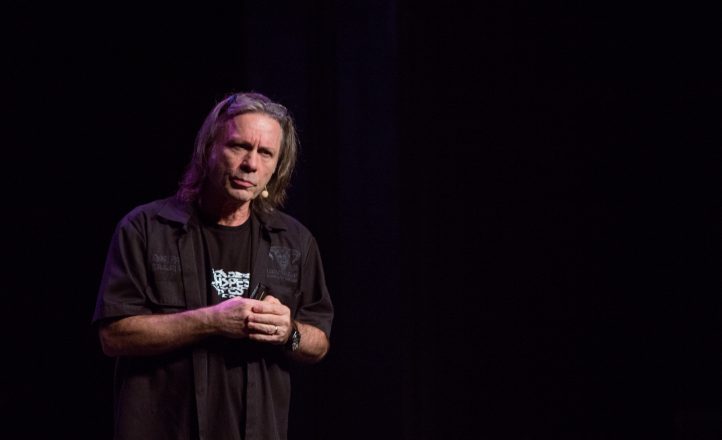 To most people with even the remotest interest in heavy metal, Bruce Dickinson is a figure who literally needs no introduction. A modern Renaissance man with enough achievements for half a dozen lifetimes, his current book tour was an opportunity for his fans to enjoy his talents as an entertainer and raconteur.

It was very different to see the Enmore in full seating mode but probably no one was surprised that none of those seats were empty. The guest of honour appeared dressed down in blue jeans and a black tee under a casually-unbuttoned shirt and without much preamble beyond throwing a bunch of balls into the crowd and a remark about the Australian cricket team, he plunged into a talk that, with a short interval, was almost as epic as a full Iron Maiden set.

A natural story-teller, Dickinson is engaging, commanding and entertaining and just as at home on stage by himself as he would be with his five mates around him. While he drew most of his material from the pages of his autobiography, to hear Dickinson recount those stories verbally, with candour and humour, was a special treat. His recollections of punishments from sado-paedo school masters evoked both cringing and laughter like a good Monty Python sketch; gales of laughter followed his tale about vomiting on Ian Gillan after a beer and drugs bender while recording the first Samson album, and there was solemn wonder from the crowd for his pensive account of his experience playing a show in Sarajevo during the siege in the Balkan War, a mission that was kept virtually a secret until the publication of his book last year.

There were other tales added for those to whom What Does This Button Do? was already familiar, the most amusing of which was about his encounters with the Royal Family, prefaced by Prince Harry’s Australian visit: “Of course, I know his dad.” Long, tense pause. “…Prince Charles!” he announces, impishly, followed by rousing laughter and applause. The Q&A session after the main performance was equally illuminating and enjoyable as he cast aside obviously silly questions and those he had probably answered hundreds of times for more fascinating subjects, most related to aviation.

The pace was crisp – the near-three hour long show never dragged, and as he left the stage no one could have doubted Bruce Dickinson’s abilities as a master story-teller and raconteur. This evening was a wonderful insight into the life of one of rock’s most interesting figures, a warm, intelligent self-aware and remarkably humble man who has brought so much to so many. Seat prices were steep for this, but I doubt anyone would have gone home complaining.