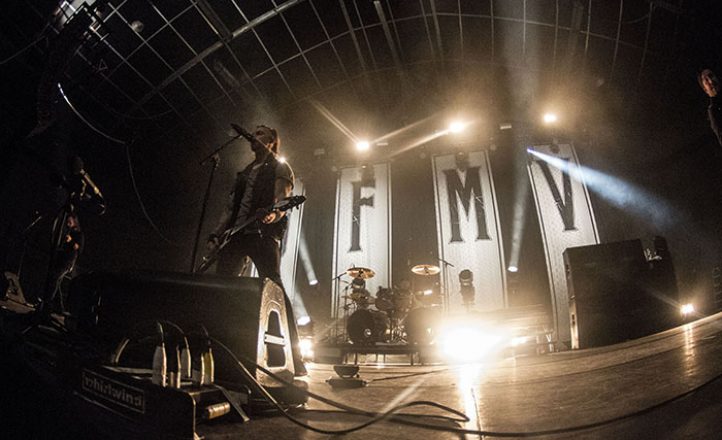 Starting a Thursday night gig at 7:30pm seems tad too early, but if some people have to work Fridays, too bad for them.

Opening this ball-tearing bill, New Orleans’ Cane Hill sound like they’ve taken Slipknot’s first album, done away with the synth and keg drums and added some meaty bass drops into the mix. Despite playing in almost complete darkness, the left side of the crowd were going off, with the first of many circle pits opening up. The early set closed with an absolute smasher of a track, ‘Timebomb’.

Like a bull in a china shop, Atreyu crashed onto the stage with a monster set of old metalcore classics and huge slabs from their recent release Long Live. Continuing with the theme of a backlit stage, the band only visible by silhouette, they shredded through favourites ‘Ex’s And Oh’s’, ‘Becoming the Bull’ and a ripping cover of Bon Jovi’s ‘You Give Love a Bad Name’.

The crowd rushed forward as frontman Alex Varkatzas jumped onto the barrier for ‘Right Side of the Bed’ before closing with the metalcore anthem ‘Lip Gloss and Black’ with its audience-voiced refrain ‘Live! Love! Burn! Die!’

The moment the four Welshmen took the stage, there was no escape from that pit as they opened with the crushing ‘No Way Out’. Keeping up that neck snapping speed with ‘Your Betrayal’ and ‘4 Words’, Michael Paget’s fretwork was a blur. Tearing through ‘Venom’ and ‘Alone’ like a one-two punch to the chest, the band departed the stage as Moose Thomas led into a booming drum solo that had the crowd clapping along before the band returned for the thrashing ‘Scream, Aim, Fire’.

Closing the first part of the set with ‘Worthless’ the band departed for an intermission, a fancy way of saying they’d be back for an encore. Returning minutes later to smash out a three track encore of ‘Her Voice Resides’, ‘Hand Of Blood’ and the crowd roaring ‘Tears Don’t Fall’ to end a massive set of riffs and ripping solos, Bullet For My Valentine  have still got it.

No Way Out
Your Betrayal
Waking the Demon
4 Words (to Choke Upon)
You Want a Battle (Here’s a War)
The Last Fight
Venom
Alone
Drum solo
Scream Aim Fire
The Poison
Worthless
—
Her Voice Resides
Hand of Blood
Tears Don’t Fall
Atreyu:
Doomsday
Right Side of the Bed
Becoming the Bull
When Two are One
Ex’s and Oh’s
You Give Love a Bad Name
Do You Know Who You Are?
Blow
Lip Gloss and Black