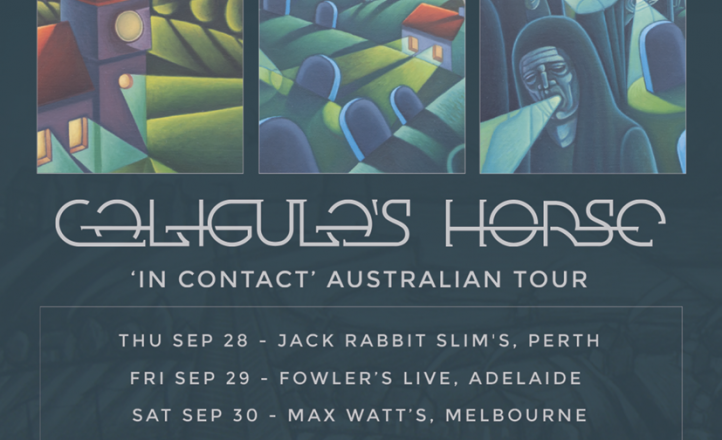 Brisbane band Caligula’s Horse has been steadily creating a name for themselves globally as something of a beacon for progressive rock. Having just toured Europe, they recently engaged in a national headlining tour. Following them around the country was Melbourne’s instrumental three-piece I Built the Sky and with various local supports added at each show, tonight’s Sydney addition was young progressive rock band Mercury Sky.

Kicking off their set with ‘No True Scotsman’ and then ‘Sosonal’, both from their Second EP titled Infra, Mercury Sky’s was a journey from chiming harmonics into heavy rock. In fact, most of their songs tonight came from said EP and they tend to feature the higher register vocals of front man Kay Thatch against the alternating clean sounding and heavy guitar passages from guitarists Keiren Lovett and Cameron Davies. Bassist Tom Bergman occasionally added in some two handed tapping to his parts whilst drummer Keiran Berry solidly played his kit with good coverage. ‘Precious’ worked well with a heavier post chorus and a good use of verse building. Similarly, the set closing was first single ‘Nausea’ which has good song construction with a catchy chorus.

Next on was progressive metal instrumentalists I Built the Sky. The three-piece launched straight into their 40 minute set with tight professionalism that continued throughout. The live version of the band features Rob Brens on drums, Sam Tan on five string bass and band mastermind Rohan Stevenson on guitar. Most songs were tracks off The Sky is Not the Limit album of 2016 but there were no intros from spokesperson Tan, just the odd jovial comment about touring and the like before the next over the top instrumental powering song was played with gusto. Stevenson, wearing a ‘Gangsta Rap Made Me Do It’ t-shirt, has a great command of his instrument, impressive vibrato and a clear tone without too much gain.

The heavier drumming was also captivating to watch but it was the bass providing a solid foundation that made the less intricate parts more enticing. The problem with instrumental music is the tendency of artists to fill every space up with notes. In this case though, an extended, down tuned rhythm guitar part with locked in riffing hammered home just how important the rhythm section is to keeping a song going. Guitar wise, the solos blurred into each other when passages of fast tapping over verses and chorus parts didn’t always allow necessary space for the virtuosity to stand out a bit better. The fans loved it regardless of any perceived self-indulgence in parts as evidenced by the aforementioned rhythmic section brilliance keeping everything running along smoothly.

After a short wait, Caligula’s Horse were on stage and opened proceedings with ‘Dream the Dead’ and ‘Will’s Song (Let the Colours Run)’ from their latest album. The material was welcomed by the audience and further justified why the album had debuted in the Top 5o. The twin guitar line up now consists of long term virtuoso Sam Vallen and new member Adrian Goleby, both of whom utilised the range available on seven string guitars to full effect. Whilst Goleby generally focused on the rhythm playing passages and harmony lines, Vallen continually slotted in fluid yet tastefully melodic solos. For example, his playing bolstered the classic track ‘The City Has No Empathy’ and the three tracks from Bloom which were incidentally played in succession, just as they appear on the album.

Another new song from the In Contact album appeared with ‘Songs for No One’ whereby new guitarist Goleby had a chance to solo in the live set and he did so with conviction delivering decent companion guitar playing to Vallen’s whip fast guitar skills. The main set was then closed off with the ‘Into the White’ and ‘Dark Hair Down’ which offered up some expressive guitar solos enhanced by wah effects plus some close knit, exotic sounding rhythmic abilities on display and suitable bombast.

The encore then took something of a different angle with Grey’s emotive, poetic spoken word piece ‘Inertia and the Weapon of the Wall’ from In Contact. It successfully introduced the haunting ‘Bloom’ and the rich, melodic and partially aggressive track ‘Marigold’ which faded out succinctly with higher vocals and clean guitar sounds. Australia truly has international talent in its own backyard and Caligula’s Horse is one such great example of a band that is maturing on the live front and in doing so, creating excellent songs that translate well to a live audience.