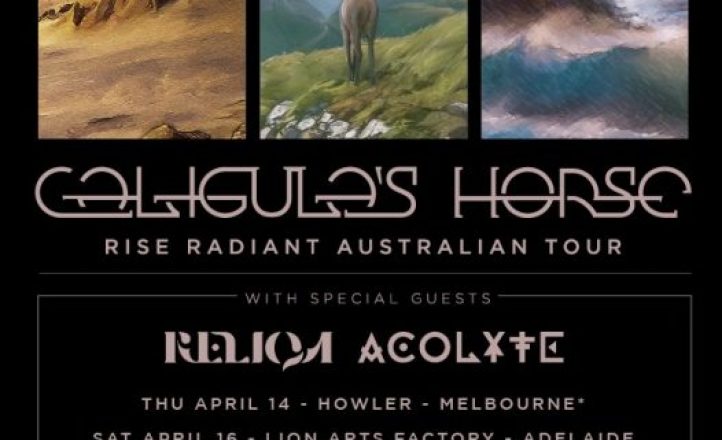 After two years of enforced idleness, Caligula’s Horse were finally able to blow off steam at a string of shows and tonight they were in Sydney at the Metro with excellent touring companions Acolyte and Reliqa.

The Metro’s intimate stage is actually a great little area, about the size of the Factory Floor and with a cool gallery above and good sightlines from everywhere. Acolyte filled the stage first, and then filled the room with expansive, melancholic progressive metal, led by the phenomenal voice of Morgan-Leigh Brown. Drenched in heavy synth melodies and sweeping guitar moves from Brandon Valentine, Acolyte is a powerful presence, with Brown’s astonishing vocals resounding throughout the venue. Time constraints kept their set to only four songs, but with each of the clocking in at close to ten minutes, it was enough of a showcase for their  stunning tapestries of darkness and light.

Young guns Reliqa hit the stage with a vibrant mix of youthful energy and their fresh take on progressive metal. Minus their bass player tonight, they didn’t let that stand in their way as Monique Pym wheeled and cascaded around the stage, high-kicking and wielding all her vocal moves from a chime to a rap. The lack of Miles Knox allowed new drummer Ben to step up and truly show what he is made of with some off-tap playing behind Pym and Brandon Lloyd, ploughing through their high-energy, off-beat electro-progressive rock songs.

With the good sized crowd appropriately warmed up, Caligula’s Horse swept onto the stage and leaned into The Tempest with their own furious energy. Between songs, Jim Grey offers snappy answers to questions shouted from the crowd, witty social observations and, at one point, decries the behaviour of a recent festival for cutting half the line-up with three days’ notice. With former guitarist Zac Greensill back for this tour, the twin guitar attack is undiminished as C-horse burn through Slow Violence and the dark and heavy Dream the Dead. Early tune Dark Hair Down brings a solid roar of appreciation from the truly devoted.

On stage, the band is dynamic and faultless, and on the floor the crowd is moving from enthusiastic to rowdy as the hook-riddled Songs for No One incites a full-on mosh that carries on in fits and starts for the rest of the show. Marigold shines like a beacon of prog metal brilliance but the band tops everything with Graves, where all of Caligula’s Horse’s creative colours run into a glorious epic. After the frustrations of the past two years, there could be no better climax. This was a stunning showcase of Australian musical talent from three amazing bands.