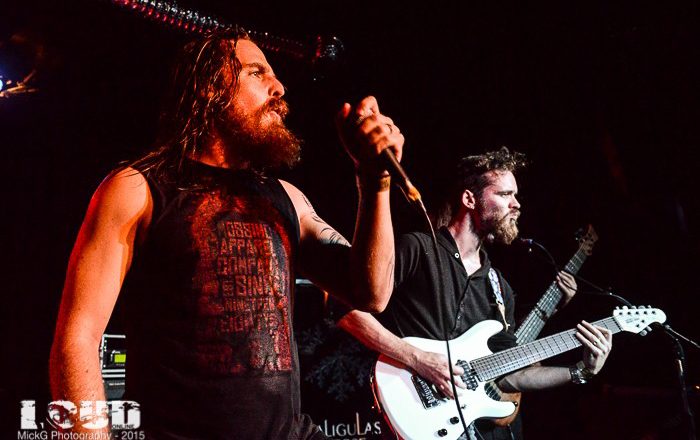 A mere twelve dollars cover charge had punters eager to catch four good Australian bands in the intimate and slightly bunker like surrounds of the Factory Floor Theatre. Being in the middle of summer, the heat outside was replicated inside with the added bonus of a stifling, tropical humidity that probably made Queenslanders feel right at home. The rest of us found ourselves enjoying the wondrous cleansing feeling of evaporated sweat being immediately replenished. Anyway, it wouldn’t be a rock show without sweat so everyone just got on with it. Recently, headliners Caligula’s Horse from Brisbane have successfully toured and co-headlined with the superb Perth band Voyager during winter as well as scoring international support slots. The Queensland based progressive and alternative rock band have also landed themselves some international booking representation so this latest tour of mostly capital cities across Australia may well be the start of some bigger treks outside of the country.

Local three piece band Red Bee, from the Blue Mountains opened proceedings with their combination of heavy riffs accentuated by the slightly metallic rhythm section and bolstered by the odd technical guitar interlude from front man and guitarist, Daniel Silk. The crowd appeared receptive and pleased with their performance to kick off the evening of live Aussie music.

Following on from Red Bee warming up the already warm room, Victorian band Orsome Welles launched into their set, supporting their recently released new EP, Erth News Bulletin. Clearly musically disciplined, the five piece tore through songs with variety as dual guitar riffs morphed into sustained chords to allow the vocals of Michael Stowers to drive the melody line. Drums and bass parts tightly fused to make songs like ‘Crash and Burn’ and ‘Negative Owe’ work well in moving the crowd. Conversely, quieter songs like ‘Fool’ showed their use of space and dynamics to effectively structure a song. Certainly some decent potential exists in this band.

Sydney four piece Breaking Orbit, with their extended, brooding progressive groove rock, evoked the sounds of Tool and Karnivool, which is not surprisingly given the mastering credits of their most recent album The Time Traveller. Overall, the songs sway from between open spaced, delay effected themes and sections to raw, powering, low end rhythm figures. Generally throughout, a constant vocal delivery in the higher end of the sonic spectrum kept songs anchored for the listener to latch onto a melody or harmony amongst the time changes underneath.

Opening their set with ‘Orion’, Breaking Orbit’s aforementioned approach to arrangements was fairly consistent within subsequent tracks. Front man and guitarist Matthew Quayle kept a lot of higher guitar embellishments running underneath his vocals whilst the guitar, bass and drums locked in to pummel out the musical interludes, creating an interesting musical tension as heard in their new songs ‘When Isis Starts to Cry’ and ‘The Glitch’, which added in some subtle electronica and additional percussion. Even with guitarist Jarvis Tetch from Beggars Orchestra filling in for Dylan Mitrovich, the rhythm section of highly animated bassist Ayden Mitrovich and cymbal smashing drummer Mark Tyson played brilliantly. Finishing their set with the slow burner song ‘Time Traveller’, Breaking Orbit delivered a tight combination of heaviness and lighter moments, showing their musical creativity.

Escaping the heat of the room for a lager, the air cleared allowing return to the venue for the headlining act. As Caligula’s Horse commenced their set with the Eastern riff tinged ‘Dark Hair Down’, front man Jim Grey made a quip about the heat being too hot for the crowd between his soaring and more driving vocals sections. Progressive metal influences for the band are evident with the seven string PRS guitars used by guitarists Sam Vallen and Zac Greensill. Be it jumping from a twin guitar harmony to musically proficient guitar solos whilst locking into a heavier riff, their techniques and arrangements are steeped in progressive metal. Second track ‘Water’s Edge’ was a great demonstration of their mastery of time changes and metallic delivery, best described as Dream Theater meets System of a Down in approach.

Bassist and backing vocalist Dave Couper similarly sports a progressive metal styled instrument and uses it to great effect with a thunderous bass sound to push the harder sections of the band’s songs. Sadly, there were some technical difficulties impacting tonight’s set, delaying playing ‘Vanishing Rites’ from the Moments from Ephemeral City album. As a result, Jim just relayed some thoughts on the state of Queensland politics at the time with apt humour as guitars noodled on some open, chiming sounds. Due to continuing technical problems, the band elected to play new mellow ballad ‘Undergrowth’. Sadly, quieter songs still seem to be seen as an invitation by some clowns at live shows to loudly converse thus ruining the experience for others. Still, the song held up pretty well with varied vocals and strummed, acoustic toned, guitar accompaniment.

Technical issues being resolved slowly required further time stretching, MC like commentary to eventually allow the initially bass driven and funky guitar styled ‘Vanishing Rites’ to get an airing. The band tightly gelled into a cohesive musical unit on this track but took that further with new song ‘Firelight’, dedicated to a departed dear friend. Next up, the track ‘Colossus’ took the crowd back to earlier material with some impressive guitar work from Sam Vallen taking the fore albeit with a few mandatory muso poses.

Maintaining momentum took a back seat to a quick emotive rant about politics before ripping into the band’s highly praised song ‘A Gift to Afterthought’ and opening track of recent album The Tide, the Thief and River’s End. Dynamics and concise arrangements make the song stand out in their live set with assured delivery and a sense of conviction clear in performance. Continuing in the heavy material, ‘All is Quiet by the Wall’ rumbled along with the band’s musicianship in a live setting undeniably in abundance.

Closing the show with ‘The City Has No Empathy’, Caligula’s Horse gave their audience yet another stellar live performance from a band set to only get bigger. The fact that they did it in the face of a slightly uncomfortable venue situation for bands and punters plus rode through disruptions of technical problems with humour intact showed their level of professionalism.  Australia has some seriously good talent that will be snapped up by the rest of the world before we know it.

Set list:
Dark Hair Down
Water’s Edge
Vanishing Rites
Firelight
Colossus
A Gift to Afterthought
All Is Quiet by the Wall
The City Has No Empathy