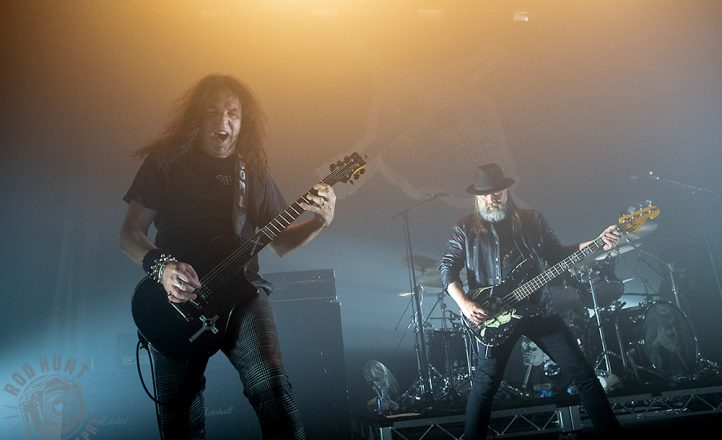 When Dark Mofo first began, the Mayor said that people wouldn’t travel to Hobart in winter for a festival. Last year over 150000 people did just that, and this year that number is set to be even higher. And that’s why I now stand in line at 11pm on a Sunday for the one and only performance by UK doom legends Candlemass.

No support acts, no silly gimmicks, just one legendary band performing their first and only show on Australian soil. The theatre packed, red wine in hand, plumes of smoke billow from the stage as the five piece emerge.
Spotlights pierce the gloom and the band launch into ‘The Well of Souls’. For the next sixty minutes we traverse a back catalogue that is fast approaching four decades.

Old songs sit comfortably next to newer cuts, as front man Johan Länqvist reaches out, grasping and clawing at those in the front row, dragging their souls into the depths. Whilst there is no mosh pit of sorts, the floor still twists and writhes in the centre, eager punters jostling to get closer. The first of two encores gave us ‘Crystal Ball’ and ‘Black Trinity’, rapturous applause and hollering concluded the encore. As the band front and centre bowed, humbled by the praise, bassist Leif Edling stated, “We travelled 36 hours for this, how about one more”, giving us ‘Solitude’ as the final slab of heavy rock.

Once again, Dark Mofo has brought the heaviest of bands to the cold and dark, southern most city in the world.