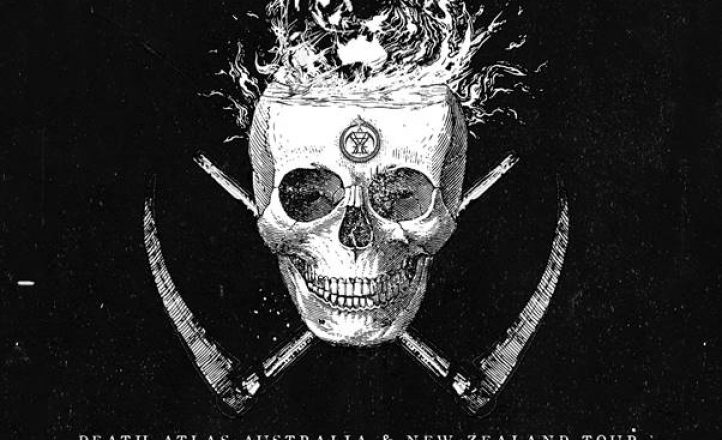 After a venue upgrade and then a venue change due to weather, here we are, soaking wet, but inside at The Tivoli in Brisbane’s Fortitude Valley it’s dry as the rain continues to cascade outside, drenching everyone eagerly waiting to get inside. Descent takes to the stage with the pit still unprepared, as the crowd all appear to be lined up at the merch table getting a fresh change of clothes to help dry off.

Descent play hard as their vocalist paces the stage to help get the pit into a groove.  It’s a duty that isn’t taken lightly, and works to good effect as people make for the pit with fresh threads and managing somehow to get a beer into their mitts as well.

Now dry, and suitably loosened up, Revocation hit the stage.  The band seem to be becoming locals as I am sure I have seen or heard them play every six to eight months in Brisbane somewhere.  That kind of schedule has had an obvious effect as we’re all happy to just sit back and suck in the band’s talent at wedging progressive guitar parts into a fast if a little standard death metal formula, making for a pit that barely moves.

As we take a quick look around the venue that appears filled to capacity, it occurs to us that with an extra weeks’ push this venue would have sold out with the lineup here as people are still turning up, showing just how great a resurgence heavy music is having in Australia right now.  Pretty sure they haven’t blown in from the Queen gig up the road, that’s for sure.

As the lights go down for the last time tonight, the intro track from Death Atlas rolls out of the speakers and Cattle Decapitation casually saunters out before hitting us hard with The Genocide and what might just be one of the best set openers currently going, pulsating and making you move in unison with the rest of the floor, whether you choose to or not. The set leans heavily on the last three albums, allowing vocalist Travis Ryan to show off his inhuman ability to switch from his high-pitched witch cackle into the lowest of heavy guttural vocals within a single line of a song. The only thing matching the spectacle of the vocalist is just how tight the band around him are stopping and starting with a precision that is difficult to actually put into words.  If the band are in your town, make sure you go see them… that will stop me trying to come up with a superlative good enough.